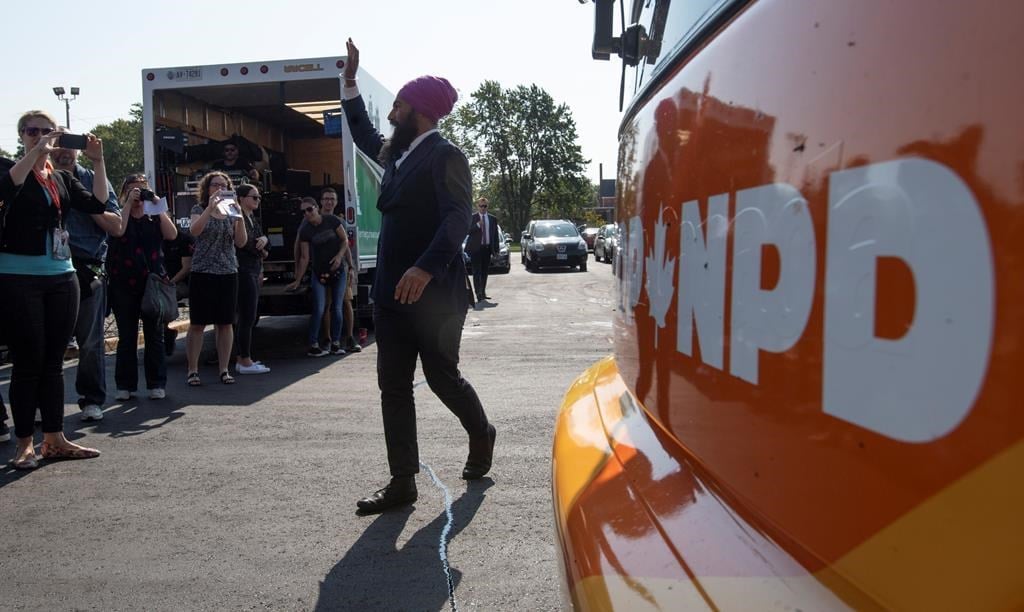 NDP Leader Jagmeet Singh swaves as he arrives at a campaign event in Essex, Ont., on Friday, Sept. 20, 2019. File photo by The Canadian Press/Adrian Wyld
Previous story
Next story

The Liberal Party pledged Saturday to keep private the details of any conversation between NDP Leader Jagmeet Singh and Justin Trudeau about the blackface scandal that rocked the federal election campaign this past week.

Trudeau has promised to personally apologize to Singh, the first member of a visible minority to lead a federal party, after his re-election bid was shaken by the surfacing of images that showed he chose to put on black- or brownface as part of costume events.

Trudeau has repeatedly apologized, calling the act of darkening one's skin racist, and said he remains committed to fighting racism and continuing to lead the Liberals.

Singh said earlier on Saturday that he was still waiting to hear back from Trudeau about whether the Liberal leader is willing to meet his condition for a discussion about the issue — remarks that came during a full day of campaigning Saturday while Trudeau took a break.

Singh, meanwhile, held two events including a roundtable discussion on racism with Toronto community leaders. Many of the participants criticized Trudeau's apology, while some expressed the view that they didn't want his behaviour to embolden white supremacists.

Singh reiterated to reporters after the meeting that he would be willing to talk to Trudeau but that he wants their conversation to be private, and out of the media's glare.

"It's important to have dialogue, but I made the condition it has to be a private conversation."

Campaigning in Winnipeg, Green Party Leader Elizabeth May was drawn into a discussion on the controversy which appeared to overshadow a major campaign announcement on the opioid crisis — decriminalizing possession of all illicit drugs. She said it was part of an emergency measure to take the opioid issue out of the realm of criminal justice and treat it as a "national health crisis."

But she spent more time talking about the blackface issue, saying she was still grappling with the images of Trudeau and reflecting on the pain inflicted by them on visible minority communities.

As for a high-profile candidate running for the Greens in Newfoundland and Labrador who exposed his own blackface skeleton the previous day, May seemed to be much more forgiving.

Greg Malone, who is running the riding of Avalon, said on Friday that he coloured his skin to play Mahatma Gandhi in a sketch broadcast on the CBC comedy series CODCO, which ran in the 1980s and '90s. He discussed it in a report on the CBC website, in which he said white people need to do a better job of putting themselves in the shoes of visible minorities.

May said she applauded Malone for coming forward.

"Greg Malone is a brilliant comic and satirist and actor, and quite well respected. And he came forward. The blackface activity in which he engaged was broadcast on the CBC. So he regrets it. It was some many, many, many years ago," said May.

"I am grateful of having someone of his character and integrity running for the Green Party of Canada in Avalon."

Singh said he wants to see a broader public discussion about racism in Canada, stressing that the issue is larger than one person.

"I'm worried, because as some of the folks here said, the conversation has been about Mr. Trudeau instead of about the impact on people," said Singh after his roundtable discussion.

That means people who have "faced violence, physical, words, barriers, economic injustice because of the colour of their skin, because they're Indigenous, because they're racialized. If we don't make it about the people, it could be easily forgotten."

Trudeau had to contend with global mockery on Friday, including from late-night American comedians, as images of the three times he chose to put on black- or brownface as part of costume events continued to flash around the world. U.S. President Donald Trump said he was surprised by the images of Trudeau.

Liberal cabinet minister Catherine McKenna said Saturday Canada still has credibility on the world stage as a climate change champion despite the controversy.

"The measure of a person and of a party should be based on what you have done, and whether it's action we are taking internationally to tackle climate change and provide a leadership role at the table, or it's action to combat racism or our announcement yesterday, that we would eliminate assault weapons," she said.

McKenna, the environment minister, tried to push the fractious federal election campaign onto more familiar territory for her and her embattled party, framing the fight against climate change as the core issue facing voters.

"This election could not be more important," noting that issues like climate change are at stake, she said.

"We have (a) Conservative Party and Conservative politicians who do not believe in action on climate change."

McKenna promised to advocate for a ban on single-use plastics from federal government buildings, museums and parks at an event on the shores of the Ottawa River just west of Parliament Hill. The pledge was part of her local campaign as the MP for Ottawa Centre, and was not a plank in her party's federal platform.

May criticized the Liberals for not sending Trudeau to a UN leaders' climate meeting on Monday in New York which is being held as part of the United Nations General Assembly. She also reiterated her view that the Liberal government's target for reducing greenhouse gas emissions is too low, calling it a "fake target."

This report by The Canadian Press was first published Sept. 21, 2019.