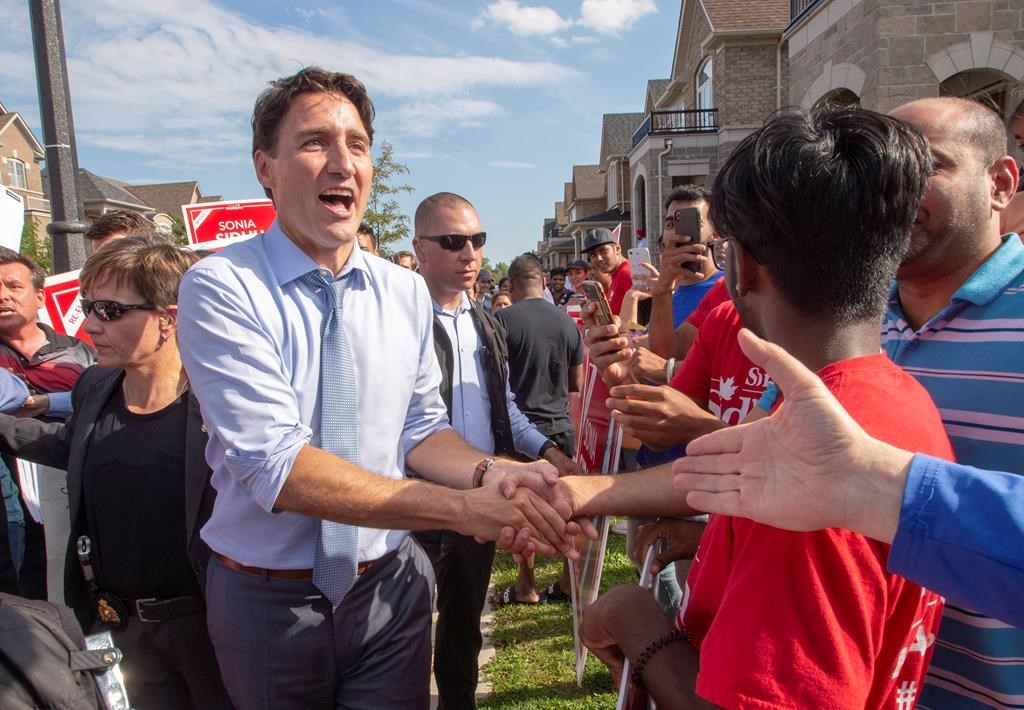 Ontario leaders — old and current — were pinned in the crossfire of Justin Trudeau and Andrew Scheer's battle Monday for the vote-rich province that's the gateway to federal victory.

Their fight focused in large part on whether a Liberal or a Conservative government would be best suited to work with the provinces to protect Canada's public health-care system. Over in Atlantic Canada, NDP Leader Jagmeet Singh and Green Leader Elizabeth May also jockeyed over their party's health-care policies.

Scheer and Trudeau, were trying to plunder a bountiful crop of votes in the densely populated communities around Toronto and the rest of the Golden Horseshoe around the west end of Lake Ontario.

Trudeau fired the first shot, telling Ontario voters not to "double down" on Conservatives after they elected Doug Ford premier in 2018. Trudeau used a new promise of a national pharmacare program to portray Scheer as a faithful Ford follower who won't defend people's interests in fighting for better access to doctors, drugs or mental-health counsellors.

Scheer, meanwhile, evoked the vanquished Ontario Liberal premier Kathleen Wynne, and her predecessor Dalton McGuinty, linking Wynne's political demise to a federal leader he branded corrupt and incapable of telling the truth. Scheer promised to make it cheaper for Canadians to buy homes, pledging to resurrect 30-year mortgages and ease the so-called stress test on mortgages, while accusing Trudeau of digging Canadians deeper into debt.

In Hamilton, Trudeau positioned himself as a defender of public health who will stand against Conservative cost-cutting, mentioning Ford by name at least a dozen times. He talked about Ford, former Conservative prime minister Stephen Harper, and Scheer as a troika of bogeymen.

"The question becomes for Canadians: who do you want negotiating with Doug Ford when it comes to your health?" Trudeau said.

The Liberal leader repeated that line, using it as a mantra to frame himself as the best defender of Canada's public health-care system.

"That is the choice people are facing: whether we continue to move forward, or we go back to the Harper years by doubling down on Conservatives who believe in cuts," Trudeau said, deriding the "trickle-down" economics approach of Harper, who Trudeau said had "failed" Canadians.

In the suburban Toronto community of Vaughan, Ont., Scheer deflected questions about his affiliation with Ford by lampooning Trudeau's focus on other Conservative leaders.

"The real question is: What's the difference between Kathleen Wynne and Justin Trudeau? The very same people who are the architects of the failed Kathleen Wynne-Dalton McGuinty government that raised taxes, ran massive deficits, mired in scandal and corruption, are now working for Justin Trudeau, and they're following the same playbook," said Scheer.

"So voters in Ontario know that they can limit the damage from Justin Trudeau to one term."

Scheer said he is committed to increasing transfer payments to the provinces for health care and education by three per cent.

In Halifax, Singh criticized both his frontrunning opponents, saying only a New Democrat government could help deliver the health care Canadians need.

"Justin Trudeau attacked Harper so viciously but he actually implemented his cuts to health care. And Mr. Scheer is going to keep it going," Singh said, sparking applause at a town-hall meeting.

The upbeat response allowed Singh to pivot from his uncomfortable debut in neighbouring New Brunswick earlier in the day where he was forced to address criticism that he has forgotten that province by never visiting, amid a summer controversy that saw some NDP candidates switch to the Greens.

Former NDP MP Yvon Godin, who held Acadie-Bathurst for about 18 years before the Liberals took it in the 2015 election, told the CBC in August he was concerned about Singh's inattention to the province.

"I'm really sorry," Singh said in Bathurst, N.B. as he introduced Daniel Theriault as the candidate in Godin's old riding. "I'm sorry I didn't get here earlier. I'm happy to be here. I'm honoured to be here and it's a beautiful place."

In Fredericton, May outlined her party's plan to break down barriers to mental health care, including reducing wait times and putting more money into services in rural and remote areas. "Universal health care is under attack," she declared.

Monday was Trudeau's second straight day courting suburban family voters in the Toronto area; he spent Sunday in Brampton, Ont., promising a big-ticket tax cut worth billions and a 25-per-cent reduction in their cellphone bills.

Ford responded to the attacks on Monday by leveraging them in a mass email fundraising pitch. "You've got the media repeating Liberal and NDP talking points about cuts to this, cuts to that," Ford said in the message. He said he had increased spending on health care and education by $2 billion. "When Kathleen Wynne's Liberals were in power, only the insiders did well. Now, bit by bit, it's you."

— With files from Allison Jones