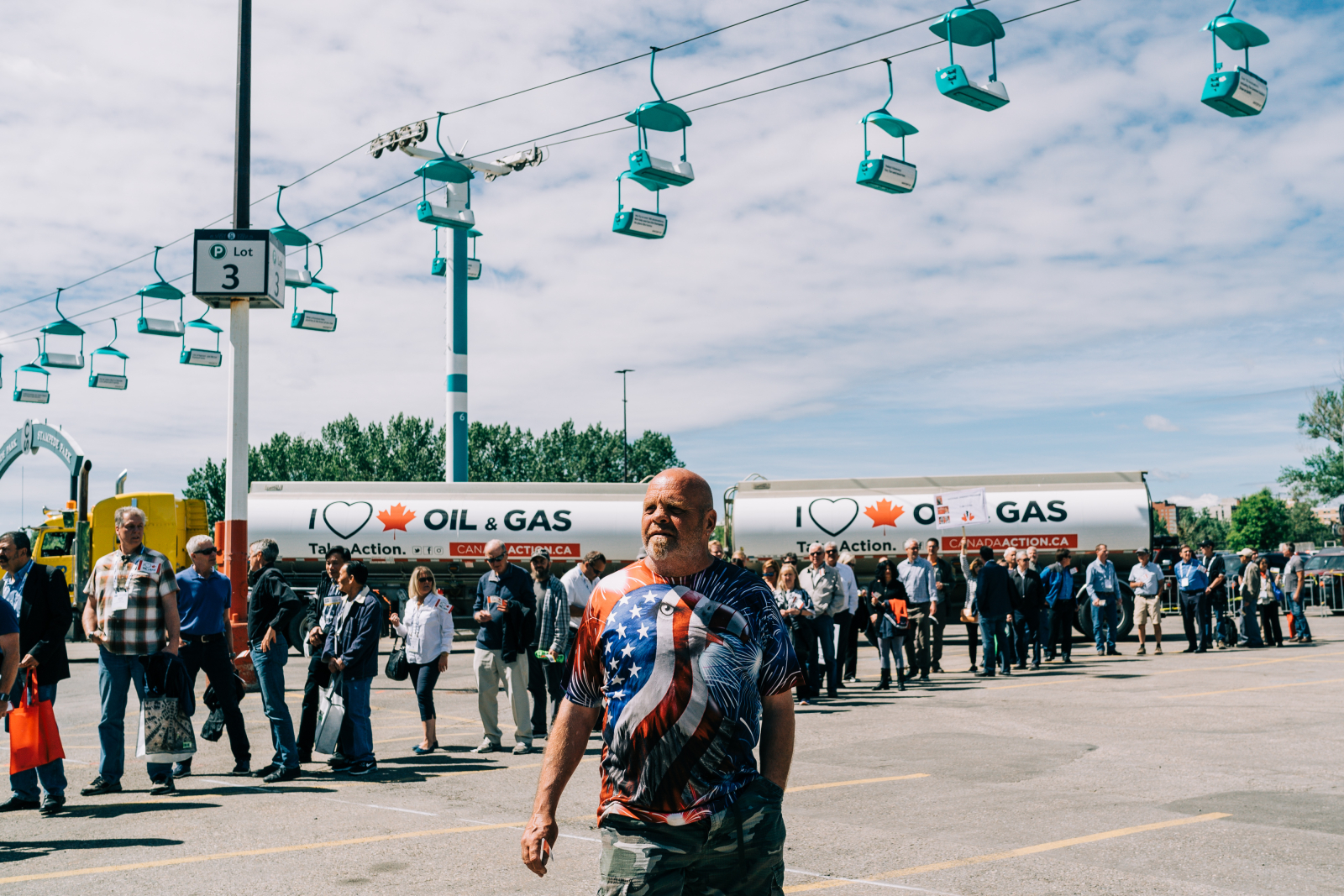 A man walks toward the podium of a pro-pipeline rally organized at the Global Petroleum show in Calgary on June 11, 2019. Photo by Louie Villanueva
Previous story
Next story

The last time Albertans had a go at electing federal politicians, they decided to send four Liberals and one member of the NDP to Ottawa.

This was a seismic shift for the province, having only elected — at most — four non-conservative candidates to the Hill at once in any election over the past 70 years or so. And even that level of support has been rare.

It wasn’t meant to last.

While Alberta has been hit with a number of shocking political results over the past few years, this federal election seems poised to return the province to old norms — a wash of Tory blue.

“These are conservative strongholds. I cannot imagine a set of circumstances that would change that before Election Day,” said Melanee Thomas, an associate professor of political science at the University of Calgary.

Thomas said there are only two of 34 federal ridings she’s watching, and both are in Edmonton.

The first seat is Edmonton Mill Woods, where Liberal incumbent Amarjeet Sohi — who was minister of natural resources — is running against the same candidate he defeated by 92 votes in 2015, former Conservative cabinet minister Tim Uppal.

The second seat Thomas has her eye on is Edmonton Strathcona. The urban riding has been held by the NDP’s Linda Duncan since 2008, but the race was split wide open when Duncan announced she wouldn’t be seeking re-election this time around. The seat was held by conservative parties for the 13 elections prior to Duncan locking it down for three terms.

This means it is conceivable Alberta will send only Conservative MPs to Ottawa on Oct. 21.

Should Alberta once again return to status quo, a self-fulfilling prophecy is likely to be set in motion. The province will only be favoured by Conservative politicians. Other parties won’t bother expending resources to try and curry favour, since their glimmer of hope for getting a foothold has been extinguished. Thus, Alberta voters will continue favouring the right.

After all, if buying a pipeline doesn’t tilt the scales, what will?

“Empirically, buying a pipeline is meant to help the Alberta oil and gas industry, it’s not designed to hurt it and I’ve heard some spectacular twists of logic for people to try to rationalize how Trudeau buying the pipeline is actually him trying to screw over Alberta. It doesn’t make any sense, but people will still try to turn themselves into a pretzel to make the argument,” Thomas said.

The province’s propensity to vote blue aside, the past four years have been far from smooth sailing for the Liberals in Alberta.

The only other Calgary seat taken by the Liberals was won by Kent Hehr, the former minister of sport and persons with disabilities. Hehr also faced sexual harassment allegations in early 2018, when a staffer at the Alberta legislature accused Hehr of calling her "yummy" a decade prior, when he was an MLA. She said women were warned about being alone with him in the legislature. Hehr resigned from cabinet, but is running for re-election under the Liberal banner in Calgary-Centre.

These were the first Liberals to be elected in Calgary since 1968.

However, Thomas doesn’t think these candidates ever had a shot at re-election, with or without scandal.

“I live in Calgary-Centre and would have told you the day after the election in 2015 that the Liberals would not hold either of their Calgary seats. This is the thing, 2015 was interesting for a variety of reasons, but one of the things that came through really powerfully in the voter-level data I was able to look at (showed) a really strong push for — or desire for — change,” Thomas said.

“We’d had a party that had been in power for about a decade, so that’s a very different context from what we have here... What that meant was the Liberals won seats that even they didn’t think they would win.”

Nonetheless, Thomas says, these issues — among others — have progressive voters in Calgary wondering where to park their votes.

All of this is playing out against a context of a more polarized media landscape, says Laurie Adkin, an associate professor of political science at the University of Alberta.

Adkin says she is worried Albertans are losing easy access to sources of news that would challenge how they see the world, between the insular existence many people live on the internet and how she sees most Alberta newsrooms leaning more to the right in their coverage.

At the same time, intellectuals and environmentalists are being targeted.

“This is a very repressive environment,” Adkin said.

On the left side of the spectrum, however, there is a tendency for a different kind of discourse suppression. Progressives are pressured more and more not to speak out against the problems they see in the left-leaning parties, or with their candidates — because, well, at least they aren’t the other guys.

“The electoral system is a factor, because people are compelled to vote strategically, and this also has a really repressive effect on political speech, as I have learned living in Alberta,” Adkin said.

“The (provincial) governments we’ve had in Alberta — pretty well forever — have put a lot of resources and a lot of money into what I call opinion-changing campaigns to persuade Albertans that we don’t have very much responsibility for the global climate crisis. That corporations and technology have the problem at hand, that acting on climate change through regulation and market-based policies will destroy any kind of security of livelihood for Albertans,” she said.

Therefore, despite the federal Conservatives having weaker policies and targets, according to experts, when it comes to addressing climate change, it is unlikely to be a key factor swaying the majority of Alberta voters.

“To say it’s extremely worrying is an understatement. So much rests on this election — provincially, federally and for the rest of the world,” Adkin said. “I can’t say I’m feeling terribly hopeful that Alberta will be a contributor to any kind of solutions this round, but I’m hoping that the rest of the country will hold us above water."

Thomas is quick to point out that research demonstrates Albertans still care about the environment, but political identity often overrules other issues, she explained. And environmental concerns and an understanding of the realities of climate change should also not be equated.

“I think people see their (political) identity as their interest,” Thomas said.

“What makes Alberta interesting, and I think unique in Canada, is that we have this one-party dominance, even though how we think and feel about issues is not that different when compared to other Canadians.”

But this isn’t going to be the election where that one-party dominance is challenged.

In Alberta, a shocking abuse of political power to protect the oil industry

Alberta has been Knuckle

Alberta has been Knuckle dragging uninformed CONservative barring an outlier for almost 80 years who cares what panderers to plant killing fossil think Ontario and Quebec decide and Ford cutting healthcare, education, arts, justice, environment, social services and research to name a few while still adding FIVE BILLION to the deficit has sealed its fate along with #NoPlanAndy being #ScheeringTheResume has sealed his fate! Good riddance to the bigot!

They should just separate. ..

They should just separate. ...even though I live here, though it's a good excuse to leave.

This is so depressing. Big

This is so depressing. Big oil creating a repressive atmosphere over a whole province - and wanting to broaden that over Canada, too. And yet Albertans will not be able to see it let alone deal with it. The local media there being no help either. Insularity is not a good thing. You lack perspective, you lack friends, you lack opportunities you cannot see. Not going to end well.

"That corporations and technology have the problem at hand, that acting on climate change through regulation and market-based policies will destroy any kind of security of livelihood for Albertans”

Right. Ignorance is bliss . . . until the coming climate disaster destroys ALL security of livelihood for Albertans and the rest of us . . .

The Conservatives are trying

The Conservatives are trying to kill the Trans-Mountain Expansion; not the natives. This takes the form of battling Bills C48 and C69, neither of which affects Candian oil but, served to stall the pipeline. Two days talking of this at the Calgary Stampede aced it. Kenny was since seen opposite an environmental lawyer, nodding and smiling his approval as she trashed the Transmountain. https://bit.ly/2nnSu82 and https://bit.ly/2of4YyR cover the two bills.