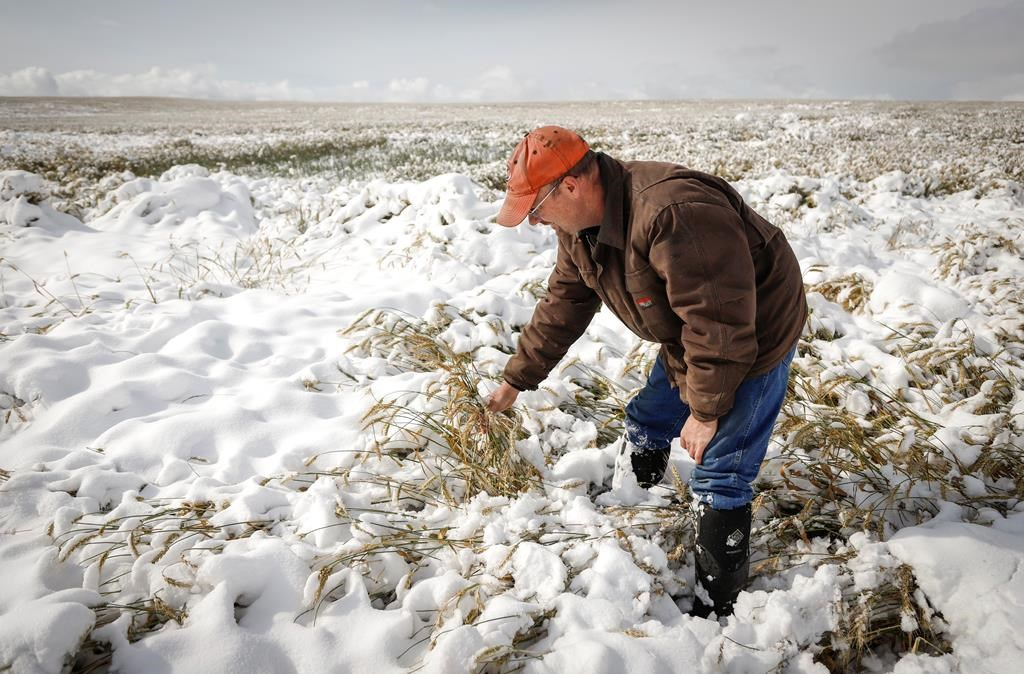 Farmer David Reid checks on his wheat crop after a weekend of snowy weather near Cremona, Alta., on Monday, Sept. 30, 2019. Some areas of southern Alberta have received over 60 cm of snow since last Friday. Photo by The Canadian Press/Jeff McIntosh
Previous story
Next story

Snow finally began to taper off in southern Alberta on Monday after an early winter wallop over the weekend that caused headaches for commuters and anguish for farmers.

Environment Canada meteorologist Kyle Fougere said at least 25 to 40 centimetres blanketed a large area from overnight Friday until Monday morning, when all warnings and watches were lifted.

Fougere said it's the time of year when chilly Arctic air and damp air meet in the region.

"When this Pacific moisture spreads over the cold air, that is a really good set up for these heavy snowfall events," he said. "We often see snowfall this time of year in the province, but these amounts are pretty significant."

Calgary had an accumulation of 27 centimetres at the airport.

It was a messy commute Monday. The Calgary Police Service logged 93 collisions between midnight and 11:30 a.m. Outside the city, travel was not advised and several schools were closed.

Waterton Lakes National Park in the province's southeastern corner was buried under 95 centimetres of snow, while parts of Lethbridge to the east received 50 to 60 centimetres and had power outages.

"There's nothing moving right now. It's been a long time since I can remember something like this happening."

He said roads were so bad on Sunday, he saw a snowplow in the ditch.

The snow is especially unwelcome to farmers as they scramble to finish a harvest delayed by bouts of severe weather.

Serfas said his harvest was done by the time the snow hit, but the yield was meagre compared with past years because his area got virtually no rain in the summer. Farmers elsewhere had to contend with unusually cool, damp conditions.

"Guys that have crops standing in areas with this kind of snow, it's going to prove difficult," he said. "I'm not gonna lie. It's going to be a challenge for guys to get their crop off."

Saskatchewan did not dodge the system, which dumped about 10 centimetres in the Cypress Hills in the southwestern corner, and was expected to blanket Regina and Saskatoon with about the same amount.

Fougere said there is some respite in the forecast.

"It will take a little while to get rid of all this snow and, until you do, the air temperature can't warm up that much," he said.

"But the westerly winds and that warmer air flooding into the province will certainly help to reduce the snowpack this week."

— With files from CJME