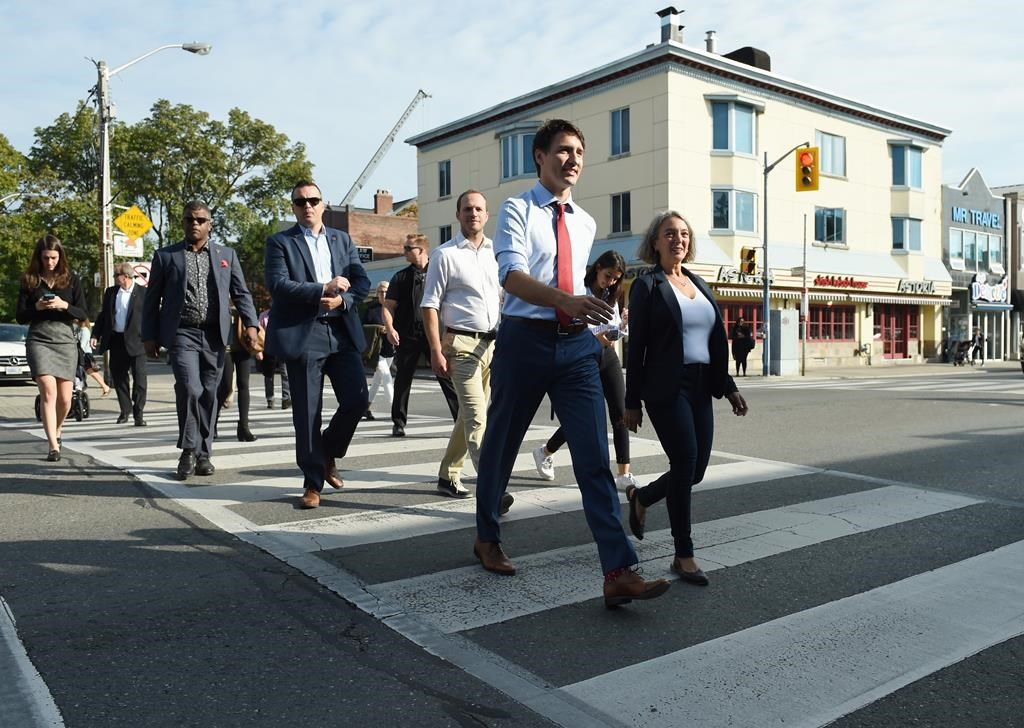 Liberal Leader Justin Trudeau crosses a street as he makes his way to make a policy announcement in Toronto on Friday, Sept. 20, 2019. File photo by The Canadian Press/Sean Kilpatrick
Previous story

Justin Trudeau tried to make virtue out of red ink Sunday as he released a Liberal platform that promises to impose new taxes on wealthy individuals, large international corporations, foreign housing speculators and tech giants to help cover the cost of billions in new spending and tax breaks for the middle class.

Even with the new taxes, the platform projects another four years of deficits if the Liberals are re-elected on Oct. 21 — $27.4 billion next year, falling to $21 billion by the fourth year of the mandate.

But in a news conference at the University of Toronto's Mississauga campus, Trudeau made it clear he's leaning in to the old tax-and-spend Liberal reputation in order to establish an important point of distinction from his arch-rivals.

"We are making a different choice than Conservatives do," Trudeau said in response to repeated questions about the persistent Liberal deficit.

"We're choosing to invest in middle-class Canadians, invest in people's communities because, quite frankly, that is what has worked over the past four years. Responsible investments have led to the creation of over a million new jobs, most of them full time, and lifting 900,000 people, including 300,000 kids, out of poverty.

"Conservatives are still making the argument that the way to grow the economy is through cuts and austerity and tax breaks that go to the wealthiest. We disagree."

Conservative Leader Andrew Scheer was taking a break from the campaign trail Sunday. But his finance critic, Ottawa MP Pierre Poilievre, told a news conference that Trudeau is effectively saying "Canada will literally go on adding debt forever." He predicted that a re-elected Liberal government would wind up imposing "massive tax increases to fund this irresponsible and costly platform" that would add $56 billion in new spending over four years.

"He expects Canadians to believe that money falls out of the sky or grows on trees," Poilievre scoffed.

And in Vancouver, Green party Leader Elizabeth May said her party would introduce a "robot tax" if elected — a levy to be paid by a company every time it replaces a worker with a machine, part of a strategy to ease the impact of the growth of artificial intelligence.

But Sunday was mostly about the Liberal platform, which Trudeau described as a "fiscally responsible" plan under which the Canada's debt-to-GDP ratio — already the best among G7 countries, at 30.9 per cent — would decrease every year of a second mandate. As well, he said Canada will retain its triple-A credit rating, shared with only one other G7 country: Germany.

According to the platform, the proposed new taxes, combined with revenue from the Trans Mountain pipeline expansion project, would fatten federal coffers by $5.2 billion in the first year, rising to $7.2 billion in the fourth year.

But the extra monies would be eclipsed by 48 new spending and tax break initiatives for the middle class, which the platform estimates would cost $9.3 billion next year, rising to nearly $17 billion by the fourth year of a second mandate. The platform does not, however, include costing for several promises, including the promise to introduce a national pharmacare program which Trudeau said will have to be negotiated with the provinces.

An advisory panel created by Trudeau and led by former Ontario health minister Eric Hoskins has pegged the cost of phasing in pharmacare over 10 years at $3.5 billion in 2022, rising to $15.3 billion annually by 2027. The Liberals are promising an extra $6 billion over four years to the provinces for health care priorities, including what Trudeau has called "a down payment" on an eventual pharmacare plan.

Singh said the absence of money to back up the pharmacare promise proves that Trudeau has "clearly walked away from universal pharmacare." he also criticized the platform for doing too little to provide affordable housing and to help post-secondary students.

The platform also doesn't provide costing for a promise to create a guaranteed family leave benefit for new parents who don't qualify for paid leave through Employment Insurance during the first year of their child's life.

The parliamentary budget officer was asked to cost the big ticket items in the platform, but the Liberals did not ask him to review every promise or the platform in its entirety.

In 2015, the Liberals won election promising to run up modest deficits of no more than $10 billion for several years before returning to balance by the end of the mandate. Instead, they ran up much larger-than-anticipated deficits and have now abandoned any pretence of balancing the budget in the short term. The platform, like the Liberal government's budgets before it, proposes no target date for staunching the flow of red ink.

The platform does promise that a re-elected Liberal government would impose an additional 10 per cent excise tax on luxury cars, boats and personal aircraft with price tags of more than $100,000.

And non-resident foreigners who own vacant property in cities like Vancouver and Toronto, where speculation is a concern, would face a "consistent national tax."

The Liberals would also crack down on tax loopholes that they say allow large corporations to excessively deduct debt to artificially reduce the amount of taxes they pay. And they would review government spending and tax expenditures in search of measures that disproportionately benefit the wealthiest individuals and large corporations — a measure the platform estimates would bring in $2 billion in the first year, rising to $3 billion by the fourth year.

The Liberal campaign has been rocked by the revelation that Trudeau appeared in black or brownface makeup several times in the past, as recently as 18 years ago. Trudeau has apologized profusely but some people of colour have suggested he needs to prove he's changed by doing more to combat racism.

The platform, written before the blackface scandal erupted, promises a number of measures to combat racism, including doubling funding for the federal anti-racism strategy and requiring all judges to take mandatory training on unconscious bias and cultural sensitivity.

This report by The Canadian Press was first published Sept. 29, 2019.