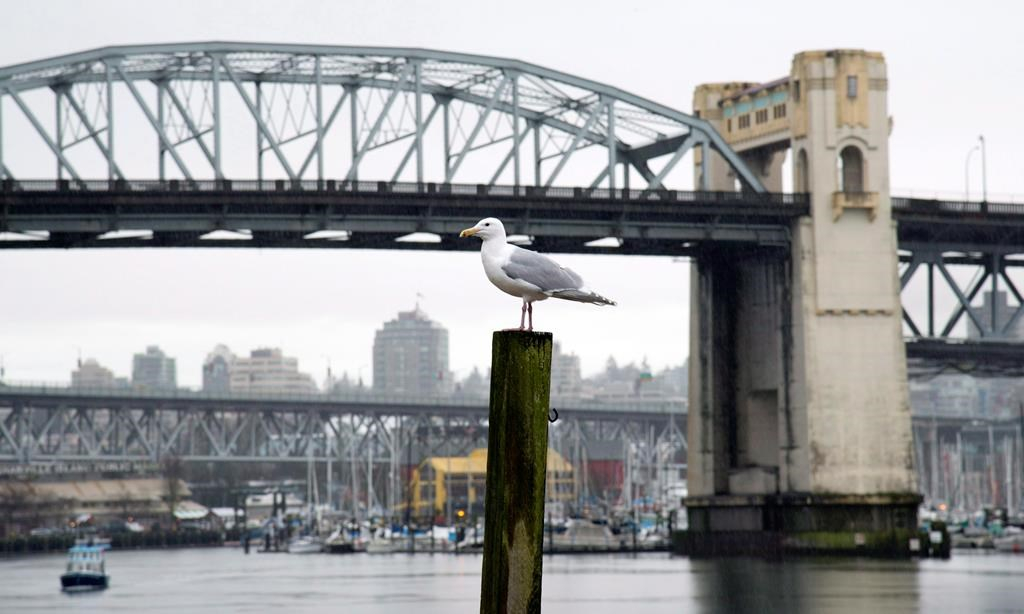 A seagull stands on a post in the rain with the Burrard Street Bridge in the background along English Bay in Vancouver, B.C. on Thursday, March 6, 2014. File photo by The Canadian Press/Jonathan Hayward
Previous story
Next story

A group of environmental activists is planning to try and shut down some of Canada's busiest bridges on Monday by having protesters lie down in traffic lanes.

The group's targets include the Angus L. Macdonald Bridge over Halifax Harbour, the Burrard Street bridge in Vancouver and the Prince Edward Viaduct in Toronto.

A Nova Scotia organizer for the group Extinction Rebellion says the planned acts of civil disobedience aim to show the public that major disruptions are inevitable if society fails to act on climate change.

The United Nations Intergovernmental Panel on Climate Change has said there will be irreversible changes if the world doesn't take rapid, intense action to cut greenhouse gas emissions.

In similar protests in the United Kingdom this summer, the group created traffic disruptions in several major cities that lasted for hours or even days.

A spokesman for Halifax police says "public safety" will be the primary focus of the force's response to any protest on Monday, and officers will "enforce federal and provincial statutes where necessary."

Halifax Harbour Bridges, which oversees both the Macdonald and MacKay bridges, said in an email that management wants to respect the right to peaceful protest while upholding the Crown corporation's mandate to ensure "safe cross-harbour passage."

The second bridge over the harbour, the MacKay, would remain open, he said, and the roughly 1,200 people who bike or walk across the Macdonald bridge daily won't be blocked.