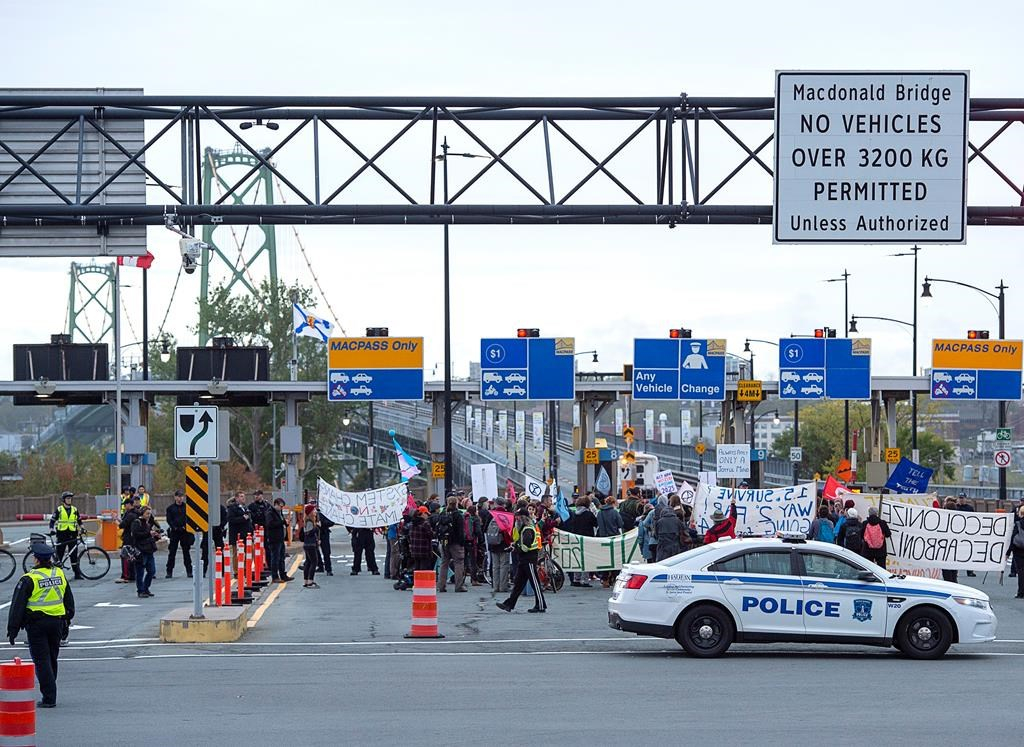 Robin Boardman says he will do everything he can to create the change needed to stop humanity from "racing towards the precipice of extinction and doing fuck all about it.”

The 21-year-old spokesman from Extinction Rebellion (XR) dropped out of university to devote himself to the cause.

He's one of thousands of activists from across the United Kingdom who will descend on central London in an attempt to bring traffic in and around government buildings to a two-week standstill.

XR, which now has 500 global chapters and has made global headlines for disruptive public protests, apocalyptic rhetoric and police arrests, recently celebrated its first birthday.

It has come a long way since a handful of activists conceived it in the sleepy, middle-class market town of Stroud in southwest England — once the heart of the industrial revolution’s cloth industry.

Next week, XR chapters from around the U.K. will man 12 sites around Parliament and other government buildings in Westminster, blocking off major bridges, roads and Trafalgar Square night and day.

London's Metropolitan Police Service is gearing up for confrontation and arrests as it contends with the approximately 9,500 activists who have committed to the blockade, XR estimates.

The action is the epicentre of a wave of protests being mounted by XR chapters in more than 60 cities worldwide, including several in Canada, on Monday and over the coming two weeks.

In Halifax, Toronto and Edmonton, activists blocked traffic on bridges, the Canadian Press reported. At Edmonton's Walterdale Bridge, video shows a handful of protesters being angrily confronted by one man urging them to allow one lane through.

Halifax police Const. John MacLeod says less than 100 protesters had gathered at the Angus L. Macdonald Bridge linking the city with nearby Dartmouth.

'You can’t behead this rebellion'

In Berlin, around 1,000 people gathered before dawn to block the Grosser Stern, a traffic circle in the middle of the German capital's Tiergarten park dominated by the landmark Victory Column. By lunchtime, another 300 people blocked Berlin's central Potsdamer Platz, placing couches, tables, chairs and flowerpots on the road. Police said the protests were peaceful.

In Amsterdam, hundreds of demonstrators blocked a major road outside the Rijksmuseum, one of the city's most popular tourist attractions, and set up tents. The protest went ahead despite a city ban on activists gathering on the road. The protesters ignored police calls for them to move to a nearby square.

In Spain, a few dozen activists briefly chained themselves to each other and an elevated road over a major artery in Madrid, snarling traffic during the morning rush hour. Police said 33 activists were taken to their premises and three were arrested for resisting orders by anti-riot officers.

At a busy press conference in central London last Thursday, Boardman said it was time to "stand up and take responsibility for our actions.”

Climate change activists' plan to spray fake blood on the Treasury did not get off to the best start https://t.co/PyboESYjF7 pic.twitter.com/wweTdptk2n

In a teaser for the two-week endeavour, the group commandeered a decommissioned fire truck to the Treasury Ministry last Thursday in order to drench it in fake blood — although in a comedic turn of events, the group lost control of the truck’s nozzle and bloodied several bystanders.

Spilling fake blood is an XR mainstay, among other headline-grabbing stunts that have included chartering boats to the middle of major traffic junctions in London, streaking in the House of Commons and activists chaining themselves to trains and buildings.

XR spokespeople said they expect between 20,000 and 30,000 people on London streets in total. Around 4,500 people are prepared to be arrested, they said, and 1,700 are willing to go on hunger strike.

The activists are hoping to hold off traffic in the area for as long as two weeks. “You can’t behead this rebellion. If you chop down one site, we revolve, thousands prepared to step into support roles — you need to take all of us down if you want to take any of us down,” spokesman Joel Scott-Halkes said.

The “decentralized” protest is “an enormous display of strength of the movement well beyond and outside of London. The Welsh are taking a site with Bristol; the east of England, they are riding on in. We’ve got Scotland coming down from the north” he added, joking that “it’s all quite Lord of the Rings.”

“We are going to very loudly, very clearly, very respectfully say that if a government is taking its people towards extinction, it is not a government anymore that we respect,” he said.

XR has three demands. It wants the British government to “tell the truth” about the climate emergency, commit to reducing carbon emissions to net-zero by 2025 and set up a citizen’s assembly on climate and ecological justice.

The smaller but growing Canadian XR chapters are making the same demands of their provincial and federal governments.

“We are calling for a massive social and economic mobilization on a scale not seen since the World War II home-front mobilization here in Canada to achieve (the target of net-zero by 2025). We acknowledge that it may even require a larger effort,” XR Quebec spokesman Anthony Garoufalis-Auger told National Observer in an email.

On Monday, XR activists from across Ontario will occupy the Prince Edward Viaduct in Toronto. XR spokesman Kevin Imrie told National Observer a few hundred protesters minimum would be expected at the “peaceful blockade,” and the growing chapter’s activities will ramp up over the winter to focus on citizens assemblies, education campaigns and working with experts on climate and urban design policy.

In Montreal, a "party" is being held downtown to mark the one-year anniversary of the UN’s International Panel on Climate Change (IPCC) report on Tuesday. The Special Report on Global Warming of 1.5 C, published Oct. 8, 2018, found there are only a dozen years left to limit global heating before drought, floods, extreme heat and poverty become significantly worsened.

“We’re meeting at a park, going to walk the streets and, at a certain point, we’re all going to sit down in the middle of a large intersection in Montreal and disrupt traffic,” XR Quebec spokewoman Elza Kephart told National Observer in an interview on Saturday.

There will also be a series of smaller actions, called “swarms,” for those who “aren’t quite ready for civil disobedience,” she added. Those protesters will confront motorists stalled at red lights with information about the climate crisis.

Kephart said she wasn’t sure whether the enormous turnout at Montreal’s Greta Thunberg-fronted climate march on Sept. 27 will help or hinder turnout for action planned in Montreal over the two-week protest. On the one hand, there’s momentum. But on the other, there’s the risk people are a little climate-action fatigued.

While energized by the march, she felt there was need for more radical action on climate. “No matter how big and how amazing marches are, I just deep down don't think that's what's going to change things, because you can too quickly return to business as usual.”

Kephart’s current film project is about pair of murderous pants determined to avenge the death of the young Indian worker who died picking their cotton.

“It's sort of really bizarrely coincidental with what's happening about the evils of the totalitarian capitalism and corporations and how we're basically going into our destruction if we don't do something,” Kephart said.

“It’s an idea I had a really long time ago, it's just really funny that it's coinciding exactly with the building of this movement.”

— with files from The Canadian Press and the Associated Press