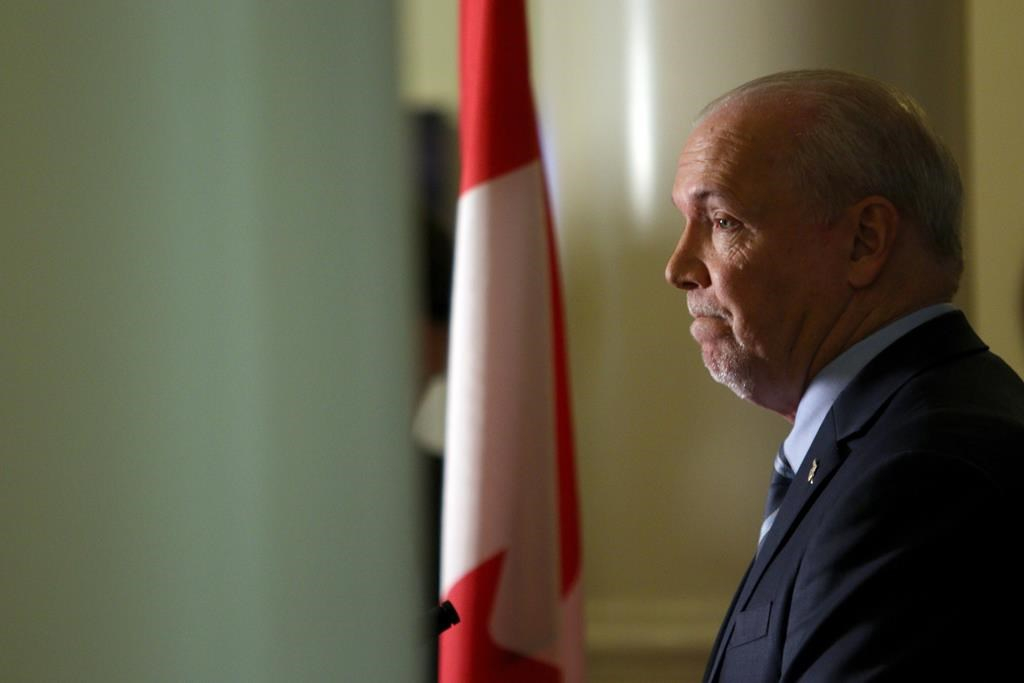 Premier John Horgan answers questions during a press conference in the Hall of Honour at B.C. Legislature in Victoria, B.C., on Monday, October 7, 2019. File photo by The Canadian Press/Chad Hipolito
Previous story

Premier John Horgan defended how his chief of staff handled allegations made against the former clerk of the B.C. legislature when he first learned of them in July 2018 as the Liberals questioned a decision to shred a document outlining the accusations.

Horgan says Geoff Meggs shredded the document after a copy of it had been given to the police.

A report released Tuesday on the conduct of former sergeant-at-arms Gary Lenz by a former Vancouver deputy police chief shows the premier's office was approached about allegations made against Lenz and former clerk Craig James.

It says a meeting that included Speaker Darryl Plecas and his deputy, Raj Chouhan, was held July 30, 2018, when a report of between 40 and 50 pages "with a long list of allegations" was produced.

Horgan says the men wanted Meggs to make the premier aware of the allegations but were told they should take the accusations to the police.

Once Meggs knew the document was in the hands of the police, Horgan said he shredded it.

"It was no longer a document that was worth keeping," Horgan told reporters Wednesday. "It wasn't created by our office. It was not a public document that was part of the running the government of British Columbia. It was in the hands of the police. There was no need for us to keep it."

Lenz and James have both retired since allegations about their spending first came to light in November 2018. Both men have denied any wrongdoing.

In a letter to Horgan on Wednesday, B.C. Liberal Leader Andrew Wilkinson says Meggs should have brought what he was told to the attention of the police and the house leaders of the three parties in the legislature.

"Mr. Meggs has admitted to shredding the evidence presented to him. This is indefensible, as it is his obligation to bring possible criminal activity to the attention of the police," Wilkinson said.

"Mr. Meggs’ conduct is an inexcusable obstruction of the judicial process. We are calling for you as premier to put your friendship aside, do what is right for the people of British Columbia, and immediately terminate your chief of staff, Geoff Meggs."

Meggs said Plecas brought "multiple copies of a draft report" containing allegations against the clerk to the meeting.

"I was in no position to verify the allegations," he said in a statement, adding that he urged the Speaker to go to the police and was later advised by Chouhan that he had done so.

"The document I reviewed was not evidence, but a copy of a summary of internal investigations conducted by the Speaker's office. There was no supporting documentation or back-up material."

Horgan said Meggs acted appropriately in his handling of the allegations and the document.

Horgan said he wasn't briefed on the document at the time and didn't know about the allegations against Lenz and James until after a special prosecutor was appointed.

He said the deputy Speaker informed him of allegations of wrongdoing against James in the summer of 2018, but he declined a request for a meeting with Plecas because the operations of the legislature are the responsibility of the legislative assembly management committee.

Horgan said he also didn't want to be involved because he had voted against the appointment of James when he was an opposition member of the legislature.

"More to the point though, and I think this is critically important, it's not secret to those of you who covered this place for a long time I voted against the appointment of Craig James for a myriad of reasons, some of them were public, some of them were private," he said.

"I felt that if there were allegations of wrongdoing, if I was involved, there could be a perception of bias."

Horgan said he asked Meggs to take the meeting instead and a document was left behind, which was later shredded.

"Geoff shredded the document," he said. "It was his to shred."