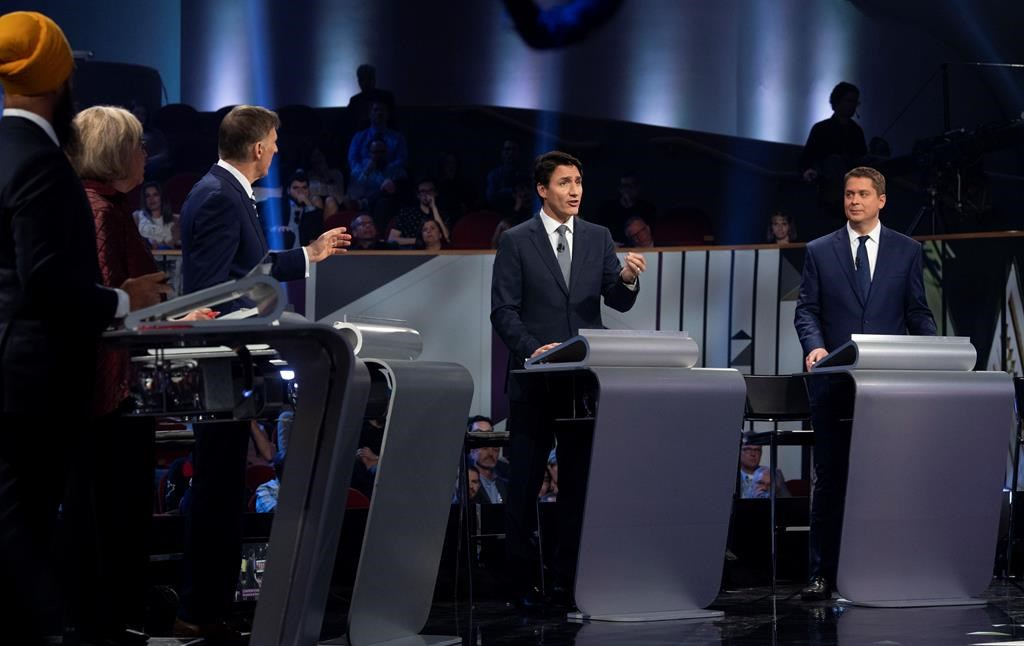 Party leaders entered the home stretch of the federal election campaign Friday, picking up the pace of their cross-country travel as they confronted listless poll numbers and a shrinking number of days left to inspire Canadians before they cast ballots on Oct. 21.

Conservative Leader Andrew Scheer was in Tsawwassen, B.C. to unveil his party's platform — detailing some of the billions in cuts he would make to pay for his promised universal tax cut and a host of boutique tax credits, while balancing the federal budget in five years. He's also planning to spend the campaign's final week detailing what his government would do in its first 100 days.

The Liberals actually scooped Scheer by releasing a portion of the costing of the Conservative platform before the leader's announcement. They highlighted the elements of the Tory blueprint containing $53 billion worth of cuts over five years, including $18 billion from planned infrastructure spending (though that money would be spent later, according to the plan) and another $14 billion in "hidden" cuts to unspecified operating expenses.

Liberal Leader Justin Trudeau was also in B.C. on Friday, after an exceptionally early morning rally at a downtown Ottawa food court, where he took a potshot at Scheer for waiting until after the campaign's leaders' debates to finally release his platform.

"The reality is, I think we all know it, you don't release your best work at 6 o'clock on the Friday of a long weekend," said Trudeau, who released his party's platform on Sept. 29.

At an event at B.C.'s Simon Fraser University later Friday, Trudeau framed the "important choice" facing voters this way: "Do we go back to the Harper approach with $53 billion of cuts announced in secret on a Friday night before a long weekend at the end of the campaign, or do we keep moving forward on a plan to fight climate change, to strengthen gun control, to invest in families and make life more affordable for the middle class and those working hard to join it."

Singh began the day early in Ottawa as well, with the release of the financial figures attached to his party's platform — after releasing the promises weeks ago. The financials include a series of tax increases, which Singh insisted will mostly hit the wealthiest Canadians, aimed at raising more than $30 billion next year to help pay for a national pharmacare plan, dental care and more affordable housing. It anticipates large deficits throughout the next four years.

Singh visited Montreal for public handshaking downtown before flying off for an evening event in Brampton, Ont., his old stomping grounds as a provincial politician before he jumped to the federal arena two years ago.

Green Leader Elizabeth May talked about foreign policy at the campaign office of her party's candidate in Ottawa Centre first thing, before decamping for a series of events in three different locations in New Brunswick.

Even Maxime Bernier, who has spent most of the campaign in his own Quebec riding, was on the move. The leader of the fledgling People's Party of Canada was scheduled to attend an evening rally in Halifax.

The early starts and packed schedules signalled a new full-tilt pace in the campaign as it heads to the wire on Oct. 21.

With advance polls open Friday through Monday, and families expected to discuss politics as they sit down to turkey dinners, both Trudeau and Singh are planning to campaign non-stop over the Thanksgiving weekend.

It was not clear whether Scheer or May will take a day off. Bernier is scheduled to campaign in his home riding of Beauce all three days.

Polls suggest the NDP has enjoyed a bit of a bump since Singh's well-received performances in three televised leaders' debates over the past 10 days. Combined with a bounce for the Bloc Quebecois in Quebec, Liberal hopes of winning a second majority have dimmed. Polls suggest they remain essentially tied with the Conservatives, with neither in reach of a majority.

Trudeau made a pitch Friday to progressive voters to unite behind the Liberals to stop the Conservatives — a message he is expected to hammer relentlessly over the final week of the campaign.

"My preference is to have a strong, clear mandate that will allow us to stand up to those conservative premiers from the Rockies to the Bay of Fundy, who don't think we should be acting on climate change, who think cuts to services that Canadians rely on is the way to grow the economy and continue to give tax breaks to the wealthiest," he said.

"The choice Canadians are facing is a really big one and I know they're going to be talking with friends and families over turkey and family dinners and reflecting on whether we continue to move forward as a country or whether we go back to the failed approach of the Harper years."

Liberal strategists say Trudeau will cover the country from coast to coast, without a day off right up to voting day. The Liberal party is also planning to start a barrage of new ads this weekend, having saved much of its advertising budget for the final 10 days of the campaign.

Scheer is also expected to travel from one end of the country to the other in the final week, with repeated trips to the Greater Toronto Area and Quebec, where the party still hopes to make gains.

The Conservative party, meanwhile, took steps Friday to shore up its base, going after the CBC for serving notice of a lawsuit against the party for using some 17 seconds of CBC footage in an online advertisement. Attacks on the CBC have in the past proven to produce some of the best fundraising results for the Tories.

In an email fundraising pitch Friday, the party noted that the CBC is a taxpayer-funded public broadcaster and argued that footage shot with "our taxes ... should be usable by those who fund them." The fact that the CBC is forcing the party to spend time and money during a campaign to fight a lawsuit was seen as evidence that "the deck is stacked against us."

This report by the Canadian Press was first published on Oct. 11, 2019.

Which party platforms make the grade on carbon pollution cuts?