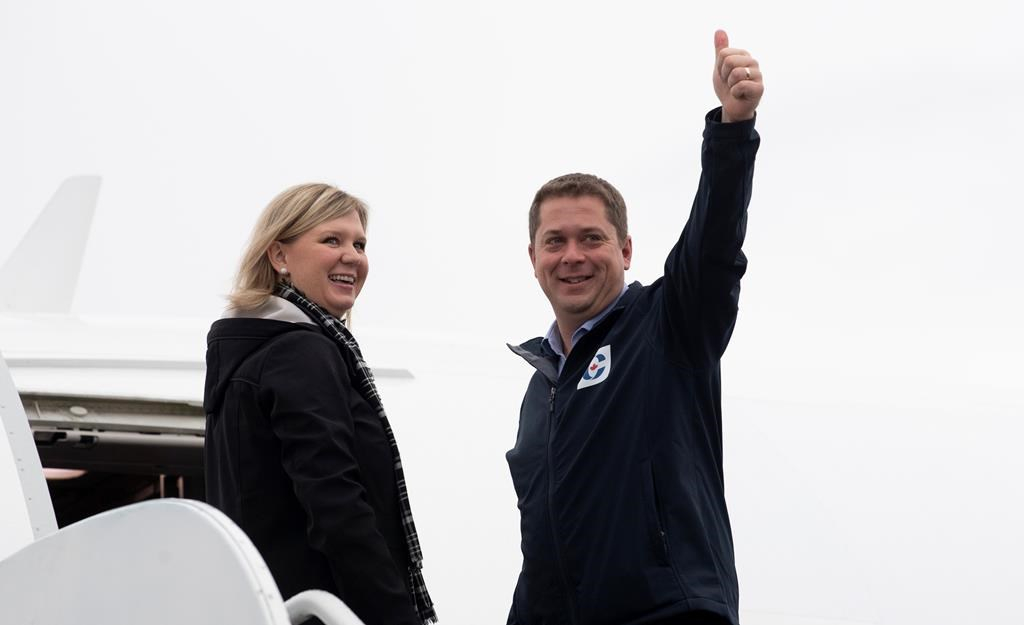 Conservative leader Andrew Scheer gives the thumbs up as he and his wife Jill board the campaign plane in Ottawa, on Monday, October 14, 2019. Photo by The Canadian Press/Adrian Wyld
Previous story
Next story

Andrew Scheer is raising the spectre of a reckless, tax-and-spend Liberal-NDP coalition government to urge Canadians to hand the Conservatives a majority on Oct. 21.

The Conservative leader warned Monday that such a coalition would lead to out-of-control spending, "massive" new taxes and "endless deficits" that would drive away investment and throw thousands of Canadians out of work.

Scheer played the fear card even though Liberal Leader Justin Trudeau refused to contemplate forming a coalition and NDP Leader Jagmeet Singh walked back his earlier speculation about joining forces with the Liberals to prevent the Conservatives from forming a minority government.

With only one week to go and polls suggesting the Liberals and Conservatives remain locked in a dead heat well short of majority territory, all three leaders were peppered with questions about a hypothetical coalition as they campaigned in three different provinces.

Singh opened the can of worms Sunday, saying his party would "absolutely" consider a coalition with the Liberals to ensure Scheer does not become prime minister.

During a campaign stop Monday in Windsor, Ont., Trudeau dodged multiple questions about a possible coalition, repeatedly responding that he remains focused on winning a majority.

"My focus is on electing a progressive government and stopping Conservative cuts," Trudeau said.

But Scheer pounced on what he portrayed as Trudeau's failure to rule out a coalition.

"Now, he's even leaving the door open to coalition government with the NDP in a desperate attempt to cling to power, a coalition that will lead to even higher taxes, less jobs, more deficits and bigger household bills," Scheer said during a campaign stop in Winnipeg.

"So my message to Canadians is this: only a Conservative majority government can prevent a government with Justin Trudeau as the spokesman but the NDP calling the shots."

Scheer asserted that Canadians have "a crystal clear choice between a Trudeau-NDP coalition that will raise taxes, run endless deficits and make life more expensive and a Conservative government, a majority government, that will live within its means, lower taxes, put more money back in your pockets."

Minority governments have been common in Canada, both at the federal and provincial levels. Generally, minorities have operated with the informal backing of another party or with the backing of different parties on different issues.

Formal coalitions have rarely been struck in Canada, although there is nothing in constitutional law or convention to preclude them.

Shortly after the 2008 government gave Stephen Harper his second consecutive Conservative minority, the Liberals and NDP negotiated a plan to form a coalition, with the support of the separatist Bloc Quebecois. Harper portrayed the plan as effectively a coup and prorogued Parliament to avoid a confidence vote. By the time Parliament resumed, the Liberals had backed out of the arrangement, which had proved unpopular.

Scheer seemed bent Monday on stoking the same fears. Yet he refused to condemn coalitions in principle, saying his objection was to Trudeau's alleged plan to form a coalition with the NDP.

Nor would Scheer say which party he would turn to for support if the Conservatives win a minority, saying only that he is campaigning for a majority.

He did rule out entering into "any type of negotiations" with the Bloc Quebecois, whose support in Quebec has surged. But the Bloc could support a Conservative minority without negotiating any formal agreement or coalition.

Bloc Leader Yves-Francois Blanchet has said his party would decide on a case-by-case basis whether to support initiatives proposed by either a Liberal or Conservative minority.

Green Leader Elizabeth May, who took a break from the campaign trail Monday, has said her party won't support any minority government that doesn't meet her high standards for combating climate change. She has denounced the Tory climate plan and maintains the Liberal plan doesn't go far enough.

On Sunday, Singh was unequivocal about his willingness to form a coalition to prevent a minority Conservative government.

But Singh would not repeat that sentiment Monday during a campaign stop on Vancouver's Granville Island, dodging repeated questions about how legitimate a coalition government would be or whether he'd insist on some NDP slots in a Trudeau cabinet.

"We're not talking about a coalition government ... I'm not negotiating the future today," he said.

Singh, whose party has enjoyed a bit of a bounce since last week's leaders' debates, said he's still running to be prime minister but that regardless of the election outcome, the NDP will stand firm on its priorities.

"You're not stuck with two choices," he said. "You can go beyond that. You can choose New Democrats who will fight for you, who have always fought for you and that's what we offer in this election."

With the Bloc and NDP eating into Liberal support, Trudeau ramped up Monday the message he's expected to hammer home every day until voting day: progressive voters must vote Liberal to stop the Conservatives.

He pointed out that the Liberals, NDP and Bloc all had strong contingents in the House of Commons during the almost 10 years that Harper was prime minister and they couldn't stop him from cutting programs and services, attacking unions and retreating from Canada's climate change commitments in the Kyoto protocol.

With the Detroit skyline behind him, Trudeau also argued that Canada needs a strong, stable progressive government to stand up to mercurial U.S President Donald Trump.

He accused Scheer of urging Canada to "cave" in to Trump's demands during renegotiation of the North American Free Trade Agreement. And he said Singh would scrap the new trade deal and reopen negotiations with Trump, creating instability and uncertainty.

"We need to continue to have a strong government with a clear focus on standing up for Canadians, standing up to Donald Trump, standing up to the forces of populism and chaos around the world and focus on investing in Canadians and promoting our values at home and abroad."

Singh accused Trudeau of lying about his stance on the new NAFTA. He said he does not want to scrap the deal but, rather, work with Democrats in Congress to strengthen the labour and environmental standards in the pact to make them enforceable.

This report by The Canadian Press was first published on Oct. 14, 2019.