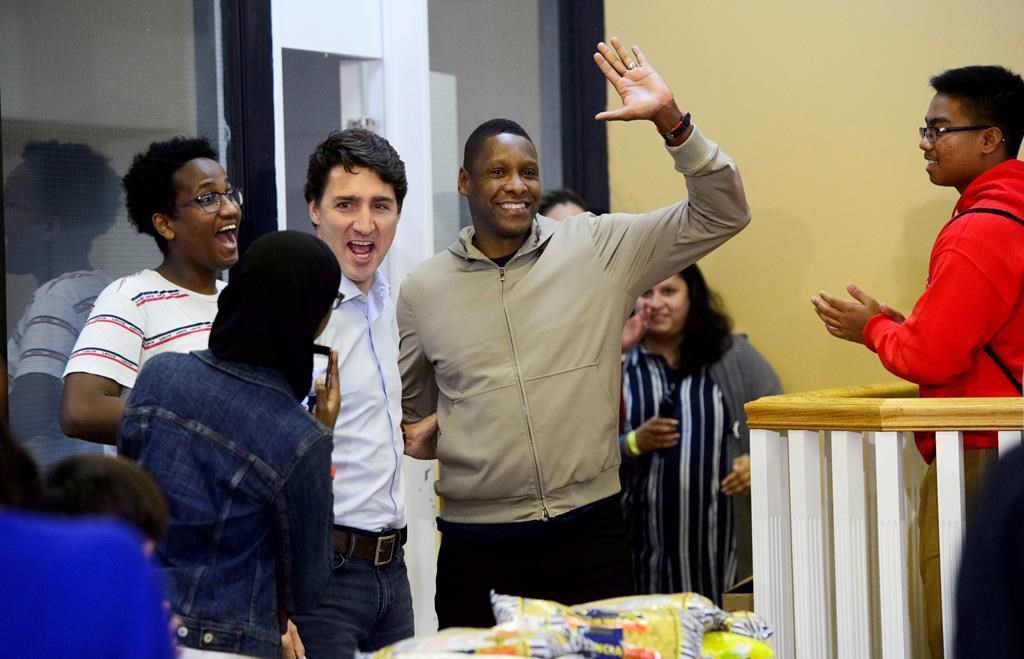 NDP Leader Jagmeet Singh said Sunday he will do "whatever it takes" to keep the Conservatives from assuming power, including forming a coalition government with Justin Trudeau's Liberals.

Singh was in a Liberal-held riding Sunday afternoon in Surrey, B.C., where he was pressed about his post-election intentions amid increasing rhetoric from Trudeau that voting Liberal is the only way centre-left voters can avoid making Conservative Leader Andrew Scheer prime minister.

With just eight days to go before the final votes are cast, the race is seemingly tighter than ever. Support for the NDP and Bloc Quebecois is continuing to tick upwards, keeping both the Liberals and Conservatives from pulling ahead into first place.

Singh is attempting to neutralize the Liberal fear factor by promising that even if Scheer's Conservatives end up winning the most seats but not a majority, the NDP would "absolutely" work with the Liberals, Bloc and Green party on a coalition government.

Trudeau — who is hoping to nab another electoral victory by pulling most centre-left voters into his camp like he did in 2015 — campaigned in Toronto and the surrounding 905-region Sunday. He said history has made clear that voting for the NDP can't stop Conservatives.

Trudeau reiterated Sunday that a Conservative government under Scheer will slash billions from essential Canadian programs, halt Canadian progress against climate change and serve up a win for the "flat out lies" and campaign of misinformation coming from the Conservative camp.

For Canadians who don't want that, Trudeau said the choice is "very, very clear."

"Do we give in to the polarization and the fear and the division and the misinformation being spread online, or do we continue to move forward, pushing back against Conservative cuts and choose a progressive government that is going to continue investing in people and continue fighting climate change," he said.

"I think it's very clear that Canadians are worried about what a Conservative government would do."

Conservative spokesman Simon Jefferies said the Conservatives are not being negative.

"The Conservative campaign has been positively sharing our plan to put more money in the pockets of Canadians so they can get ahead," he said in a written statement. "We have also been reminding voters about Justin Trudeau's record and explaining how he will continue to make life more expensive if re-elected.

Earlier this week, Singh laid out the six conditions he would have to support a minority government including climate change action, national pharmacare, interest free student loans, cuts to cell phone bills and investments in affordable housing, as well as a new tax on the "ultra-rich."

Bloc Quebecois Leader Yves-Francois Blanchet, the only other major party leader campaigning publicly Sunday, said he has no interest in forming a coalition with anyone.

"There will be no support for a government, for a party, for a coalition or anything of the sort," Blanchet said in French during a campaign stop in an NDP-held riding northeast of Montreal.

"We speak exclusively for Quebec and our friendships are more within Quebec than with the other parties in Ottawa."

Blanchet said he would support any government on any issue as long as the policy is good for Quebec, and that the determination of support will be made case-by-case.

In 2008, the Liberals and NDP formed a coalition with a written letter of support from the Bloc, that intended to topple the minority Conservative government under former prime minister Stephen Harper. To avoid losing power, Harper prorogued Parliament, and by the time the House of Commons resumed almost two months later, the Liberals had undergone a leadership change and the prospect of a coalition with the NDP dissolved.

Harper called the idea of the coalition an attempt to seize power by an "unelected" government, a line he repeated during the 2011 election when he worked to convince voters to give him a majority government rather than risk a coalition. They did for one term, defeating him in favour of a Liberal majority in 2015.

Some Conservative pundits and online voices have been warning of the idea of a coalition already, and it could become fodder for Scheer this week now that Singh has put it right out in the open.

Scheer — who was taking a day off to celebrate Thanksgiving with his family Sunday — is making his final week's push an effort to show voters comfortable with the idea of a Conservative government. After unveiling his full platform Friday, Scheer is now turning attention to detailing what the first 100 days of his prime ministership would look like.

All the parties were focused over the Thanksgiving weekend on getting out their voters, with four days of advance polls from Friday through Monday.

Singh's first act Sunday was to cast a ballot in the advance polls in his Burnaby South riding, a seat he won in a byelection last winter more than a year after he won the NDP leadership.

This report by The Canadian Press was first published on Oct. 13, 2019.