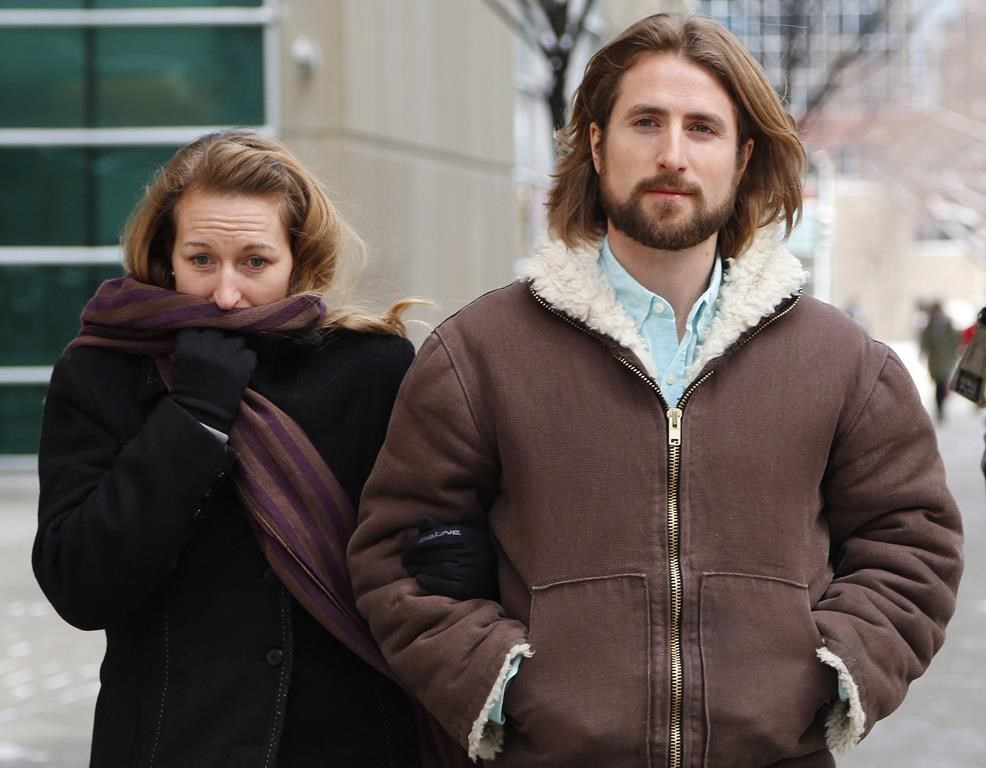 David and Collet Stephan leave for a break during their appeals trial in Calgary on March 9, 2017. File photo by The Canadian Press/Todd Korol
Previous story

The Crown is appealing the not guilty verdict in the case of an Alberta couple charged with not seeking medical attention sooner for their sick son.

Last month, Justice Terry Clackson acquitted David and Collet Stephan of failing to provide the necessaries of life in the death of 19-month-old Ezekiel, who died in 2012.

The couple testified they thought their son had croup and used herbal remedies to treat him. They called for an ambulance when he stopped breathing, but he later died in hospital.

Clackson sided with the defence expert who said the toddler died of a lack of oxygen, not bacterial meningitis as reported by the original medical examiner, Dr. Bamidele Adeagbo.

"The relief sought is that the acquittal be set aside and a conviction entered or a new trial be ordered," reads the appeal, filed Friday in a Calgary court.

In his decision, the judge noted the Nigerian-born medical examiner spoke with an accent and was hard to understand.

"His ability to articulate his thoughts in an understandable fashion was severely compromised by: his garbled enunciation; his failure to use appropriate endings for plurals and past tenses; his failure to use the appropriate definite and indefinite articles; his repeated emphasis of the wrong syllables; dropping his Hs; mispronouncing his vowels; and the speed of his responses,'' Clackson wrote.

The judge, without explanation, also called out Adeagbo for "body language and physical antics ... not the behaviours usually associated with a rational, impartial professional imparting opinion evidence.''

The Crown said in its appeal notice that Clackson took into account "irrelevant considerations."

"The trial judge's comments in the trial gave rise to a reasonable apprehension of bias," the Crown wrote.

The judge erred by insisting prosecutors had to prove taking Ezekiel to the doctor would have saved the boy's life and mistakenly established a medical standard unknown to law, the Crown added.

Clackson's comments prompted a letter of complaint to the Canadian Judicial Council, signed by 42 doctors and lawyers from across the country, asking it to investigate.

"In reading Justice Clackson's reasons, he makes a number of ad hominem attacks on Dr. Adeagbo which lack a judicial mien, and in which some may perceive racism,'' the letter reads.

"In particular, Justice Clackson harshly mocked Dr. Adeagbo's manner of speech and accented English, and thereby inappropriately implicated his national or ethnic origin as a person of African roots.''

The council has confirmed it had received the complaint, as well as two others.

Alberta's justice minister was asked about the appeal at a news conference Tuesday, but offered no opinion.

"We leave the decisions regarding certain appeals to the lawyers that are handling those files," Doug Schweitzer said.

David Stephan said Tuesday he needed to get more detail before he could comment on the appeal.

"We were made aware by the media that the Crown is appealing the 'not guilty' verdict," Stephan wrote on Facebook.

"We still have not received anything official from the Crown and as of yet, are not fully aware of all the points of appeal."

And what action is being

And what action is being taken to remove the judge from the bench?