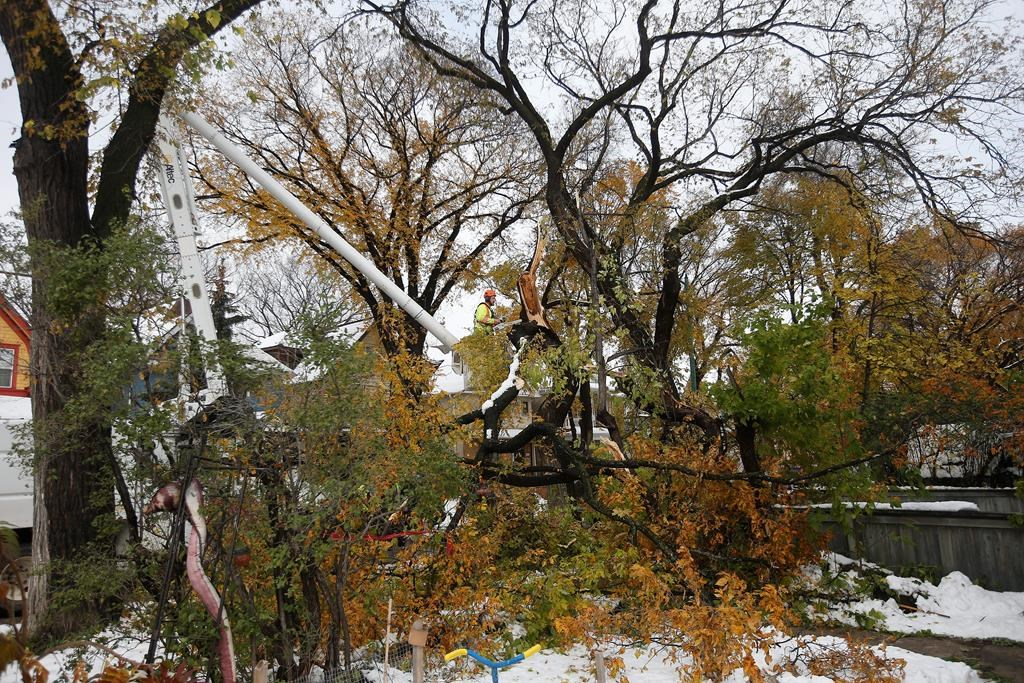 Crews cleanup after a snow storm which hit parts of Manitoba on Thursday and Friday in Winnipeg on Sunday, October 13, 2019. Photo by The Canadian Press/John Woods
Previous story
Next story

More than 30,000 Manitoba homes and businesses remained without power Sunday in the wake of a snowstorm that the province's Crown energy utility said had left an unprecedented amount of damage to transmission lines, towers and more, and will take days to repair.

"In some areas, we have more lines and poles down than standing," Manitoba Hydro chief executive officer Jay Grewal said Sunday.

"Our crews are out there working hard, 16 hours a day, doing their best to restore the power."

Premier Brian Pallister declared a state of emergency early Sunday morning. The move makes it easier for Hydro crews to access private land and invokes help from neighbouring provinces and states — Ontario, Saskatchewan and Minnesota — who were being asked for workers, poles and even transmission towers.

Grewal said the utility is already sourcing towers from its suppliers in Ontario.

"So really the challenge is the logistics — to get that equipment to the locations that we need, given the limited access due to weather on the roads."

A blast of heavy, wet snow started pummelling much of the province Thursday and continued into Friday. More than a quarter-million customers lost power at some point as the slushy snow brought down tree limbs and power lines.

Most had been restored by Sunday as the weather cleared and highways reopened, allowing crews to get to where they were needed. But only 80 per cent of damaged areas had been assessed, and Grewal was unable to say how long it would take for everyone to get their electricity back.

A news release from the utility said it will take days to repair the damage.

Among the hardest-hit areas was Portage la Prairie, a city of 13,000 people that still had wide swaths without power Sunday. City officials warned on social media that the city's sewage lift stations were operating on backup power and that residents should not flush their toilets.

Several First Nations had begun evacuating the elderly and other vulnerable people into a Red Cross emergency shelter in Winnipeg. The provincial government asked all residents to avoid non-essential travel.

In Winnipeg, Lynn Penner was enjoying her first full day of electricity since Thursday. Her suburban home went without power from Friday evening until late Saturday night. With temperatures hovering around the freezing mark, her family put on sweaters as the house cooled and found a place to keep perishable food.

Downed tree limbs had partially blocked Penner's street until some of her neighbours took matters into their own hands.

"Some neighbours got together and ... the chainsaws were running Saturday morning."

The City of Winnipeg said it could be months before an estimated 30,000 city-owned trees that were damaged can be fully cleared from public spaces, and Mayor Brian Bowman has declared a local state of emergency.

Ontario Premier Doug Ford issued a statement saying his province is ready to help his neighbours in Manitoba.

"Our government has reached out to Premier Pallister to offer our full support in whatever capacity is needed," Ford said.

The most encouraging news Sunday was the weather outlook. Little precipitation was in the forecast, temperatures were expected to rise and roads were re-opening across the province.

"We're optimistic as we see the number of houses that are having power restored go up and the number that don't have power go down," Pallister said.

The province is also warning that rivers have been rising because of the precipitation, and that it is monitoring the levels as the snow, mixed with rain, melts.

— with files from Rob Drinkwater in Edmonton

This report by The Canadian Press was first published on Oct. 13, 2019.