Bring those who question climate change into the discussion: panellists

By The Canadian Press in News, Politics | October 16th 2019
#1116 of 1256 articles from the Special Report: Race Against Climate Change 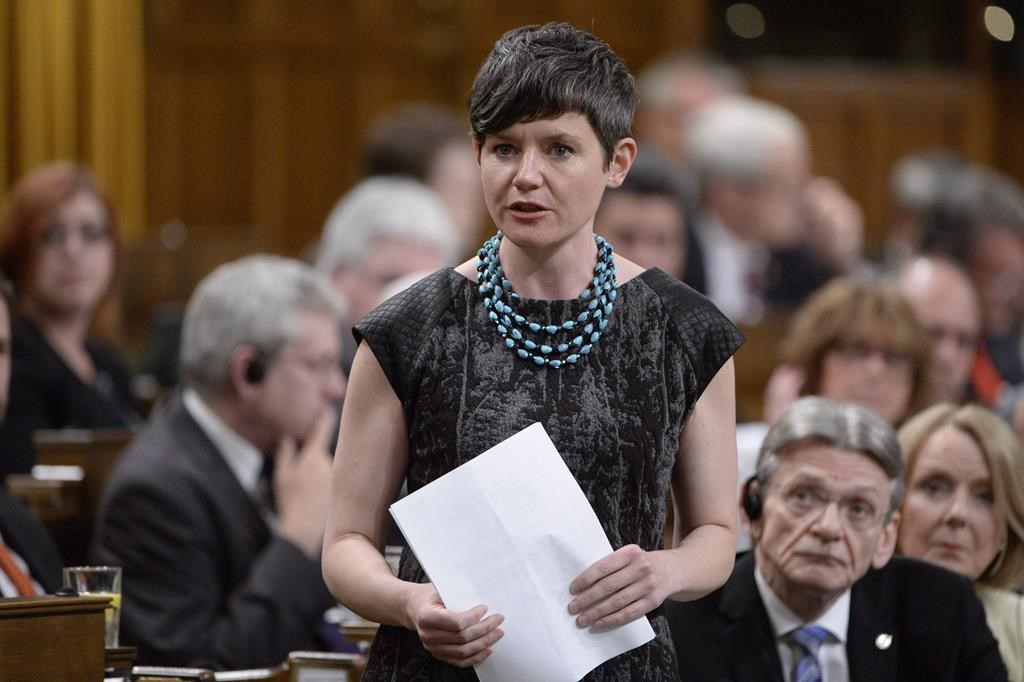 NDP MP Megan Leslie asks a question during Question Period in the House of Commons in Ottawa on Wednesday, June 3, 2015. File photo by The Canadian Press/Adrian Wyld
Previous story

A way must be found to bridge the tense political divide in Canada over climate change, or some citizens and political leaders will just keep avoiding the topic, panellists said Monday during a public forum in Halifax.

Megan Leslie, the chief executive of the World Wildlife Fund-Canada, said there are "extreme outliers" among political parties on the issue, and efforts must be made to shift people from denial to discussion.

"It is on us as civil society ... to work with people who have those beliefs and bring them into the conversation," the leader of the conservation group said during the MacEachen Institute of Public Policy and Governance event

During her presentation, Leslie focused on her organization's call to preserve wild areas and habitats to reduce the rapid decline in species abundance. That would also keep these areas — whether wetlands, coastal estuaries or grasslands — as landscapes where carbon continues to be absorbed.

"A third of our global emissions comes from the destruction of nature .... As a wildlife area we want to protect those areas where we know carbon is locked in the soil," she said.

Leslie said when Canadians learn that protecting wilderness also reduces carbon in the atmosphere, it opens fresh horizons for discussion on the climate change topic.

She also said in an interview there's been too much divisive rhetoric thrown around during the current federal campaign.

"I think the conversation is very polarized now because it helps politicians get certain votes, so they can yell and scream at one end or the other end of the spectrum, and we pay attention and we follow based on where we're at," Leslie said.

In an interview after the presentation, she cited Alberta Premier Jason Kenney as an example.

Kenney recently said he didn't attend September's day of global action on climate change because "much of it" was "coming from the radical left" — a view that organizers have described as untrue.

However, Leslie said if people make climate adaptation efforts at a local level, then political leaders will follow.

"Now that we're getting to be successful, politicians of all kinds are lining up to support that .... If we as civil society start figuring it out, I think political leaders will follow us," she said.

Panellist Kate Sherren, a professor at the school for resource and environmental studies at Dalhousie University, said in her research coastal residents in Nova Scotia struggle to accept the need to adapt to a future of rising sea levels and more intense storms.

However, when coastal dwellers were asked to imagine the changes as helping future generations enjoy the coast, "it helps citizens remember the way their communities worked together in difficult times," she said.

Dr. Robert Strang, the chief medical officer of Nova Scotia, said one of his approaches is to mention the impact of climate change on health, whether he's discussing the spread of infections or the need to act to prevent damage from intensive storms hitting the coast.

There has been growing evidence that climate change is already having major impacts on Atlantic Canada.

The Canada's Changing Climate Report released earlier this year projects that the region will experience extreme sea-level change in the coming years. This will result in more frequent high water-level events, causing damage to coastal infrastructure and ecosystem, the report said.

In a telephone interview from Alberta, Martha Hall Findlay, president of the Canada West Foundation, said she agrees with Leslie that the climate change debate has become too polarized and the current election campaign has worsened the situation — casting Albertans in a negative light.

"The key is how do we actually figure out how we get to where we want to go in a time frame that works and also one that doesn't hurt a lot of people in the process."

Unfortunately there is no way

Unfortunately there is no way to 'sugar coat' the impact of global warming as detailed in UN IPPC Reports, peer reviewed by the brightest scientific minds in the world.

Current CO2 levels of 415ppm reflect emissions of 30 years ago and if all CO2 emissions were stopped today it would take approximately 100 for CO2 levels to decrease and existing impacts of global warming to subside.

Therefore from UN reports:
>need to reduce CO2 emissions at least 50% by 2030
>need to leave approximately 70% of all fossil fuels in the ground

While a 'Just Transition' and 'Climate Justice' are critically important the urgency is to reduce global CO2 emissions before national GDP and economies collapse under the weight of catastrophic climate events.

While talk is critically important however climate denial of scientific facts probably have no place in those discussions.

While talk is critically

While talk is critically important, denial of the weight of existing scientific evidence of climate change has no place in these discussions. While climate science must be expressed as scientific evidence, rather than absolute fact, it must be emphasized that the volume of that evidence makes denial impossible due to the mountain of evidence from different viewpoints and sources and methods that would have to be disproven with alternate explanations. This means there can be no sensible discussion of whether critical levels of man-made climate change exist or not. The only room for discussion is the nature of the mountain of scientific evidence and whether that evidence is sufficient to warrant global social change, and the risks of not acting on the basis of existing evidence.
As well, the economic effects of climate change should be considered from the point of view of the economic stimulation associated with new investment, rather than as a social cost and drag on the economy. There needs to be discussion of the evidence that indicates that a move to a sustainable economy will invigorate the present lack-luster economy, and a productive discussion will go from there to discuss the ways and means of re-directing capital (both public and private) to invest in the infrastructure to make that happen.

So Jason Kenney thinks that

So Jason Kenney thinks that normal, informed people are the "radical left"? Wow!
The only reason there is any denying going on is because of the incredible amounts of money Big Oil has thrown around to deceive people. I think that as these court cases proceed (various jurisdictions suing oil companies for the damage climate change will do because they knew and lied about it instead of informing everyone) people will realize what a horrible crime has been committed against all life on Earth and supporting oil companies will no longer be politically viable. Kenney and the other stooge Premiers need to start thinking about what their long-term legacy will be. Are you a leader or are you a corrupt troll?

By The Canadian Press in News, Politics | September 21st 2019