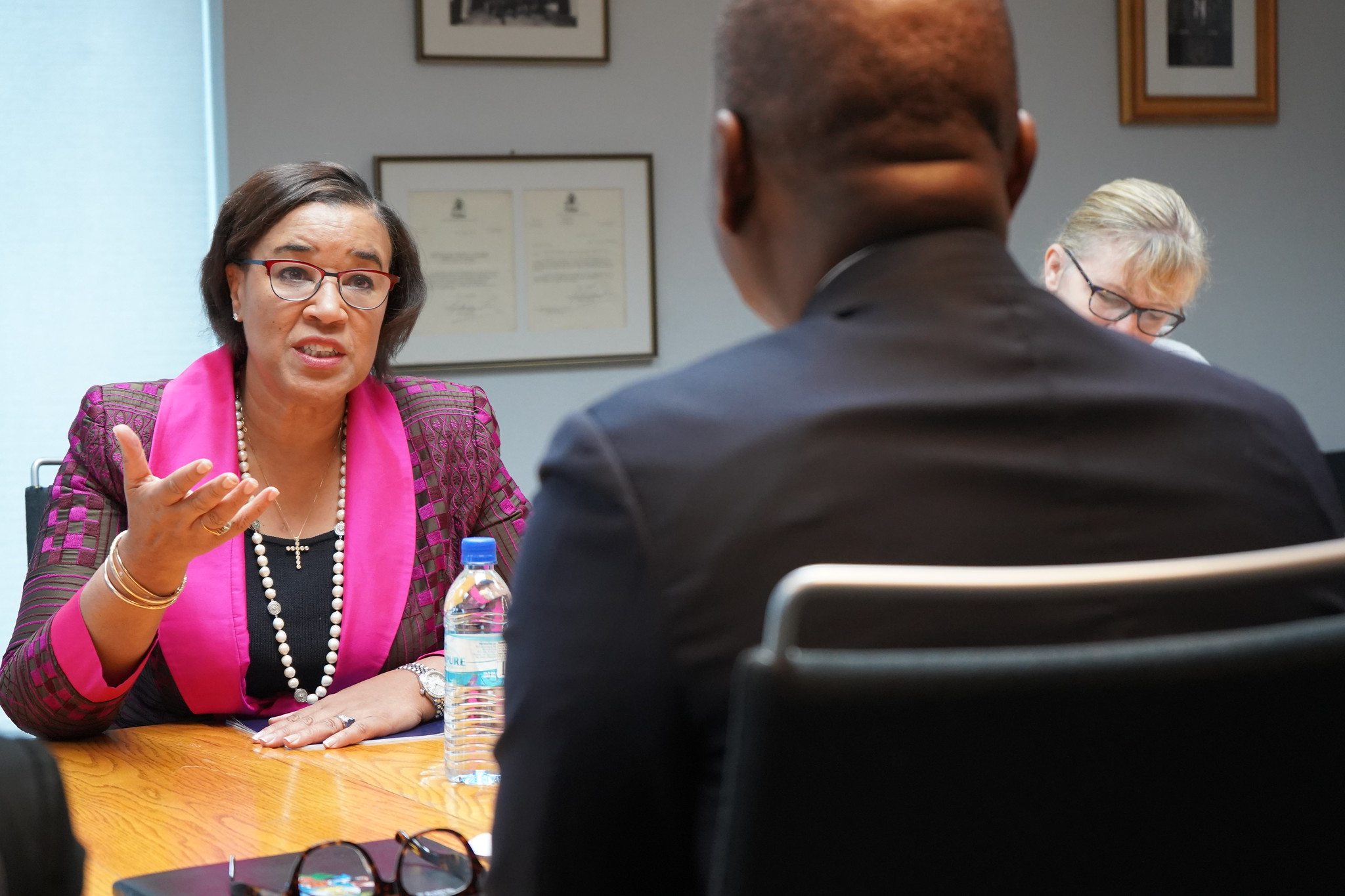 Secretary-General of the Commonwealth Patricia Scotland meets with The Bahamas' Foreign Affairs Minister Darren Henfield in October 2019. Photo by The Commonwealth
Previous story
Next story

Thirty years ago this month, the Commonwealth of Nations signed an environmental declaration that is remarkably prescient.

The Langkawi Declaration, signed in Malaysia in October 1989, warns about the degradation of the environment from "the burning of fossil fuels" and other forms of pollution.

It notes the “greenhouse effect” may lead to “severe climatic changes that could include floods, drought and rising sea levels," and it ​​​​​calls on countries to develop strategies for “adapting to climate change” and “reducing greenhouse gas emissions.”

Thirty years later, the secretary general of the Commonwealth says she believes the world is finally paying attention to climate change in a serious way — and not a moment too soon.

“I believe that we need to encourage every single country, and every single individual — every single one of us — to take personal, regional and national responsibility for the climate crisis that is now facing us," Patricia Scotland said in an Oct. 17 phone interview with National Observer.

"Together, I genuinely feel that we will beat this. But I know we will not beat it if we do it on our own.”

Scotland has seen destruction up close. She recently visited The Bahamas, ravaged by Hurricane Dorian, and spoke there about the "existential threat this climate crisis presents to small vulnerable island states and to the least developed."

An 'interlink' between climatic disasters and debt

The Commonwealth is deeply involved in the climate fight, pushing initiatives like a climate finance hub, a disaster risk portal and a new program called Common Earth that aims to harness strategies to restore environments damaged by climate change.

Last month, the Commonwealth hosted an environment ministers meeting on the sidelines of the United Nations Climate Action Summit in New York. The meeting was intended to accelerate carbon-pollution cuts and sustainable growth in Commonwealth countries. Patricia Fuller, Canada’s ambassador for climate change, represented Ottawa at the Sept. 25 meeting.

This week, Commonwealth finance ministers and bank governors gather in Washington, D.C. to discuss how to prevent future debt crises. But "there’s an interlink between climatic disasters and national debt," Scotland noted.

Bank of England Governor Mark Carney recently said the global financial system is continuing to back projects that will emit carbon pollution at such high amounts as to heat up the planet by more than 4 C — more than double the limit in the Paris Agreement, the Guardian reported.

Carney, who is a former Bank of Canada governor, and others have championed the idea that banks and firms should be forced to disclose the risks they face as a result of the climate crisis, as a way to provide investors with better information to make more informed decisions supporting the low-carbon economy.

Scotland said she was interested in hearing from bank governors on that and other topics. “The great opportunity of getting the bank governors to come is to listen to suggestions such as those being promulgated by Mark (Carney) and others, and say, ‘Is this the way forward?’” she said.

“Of course, I am really interested in what Mark Carney is saying, and I’m even more interested to see what the response will be from his fellow governors of central banks, because getting the banks intimately involved in this is going to make a real difference."

The Bank of Canada declared this year that banks loaning money to the oil and gas sector are exposed to risks from climate change that could become destabilizing to the Canadian financial system.

Yet more than a third of the world’s top 75 banks by assets, the Financial Times reported, have still not backed the Task Force on Climate-related Financial Disclosures, the initiative set up by a body formerly chaired by Carney called the Financial Stability Board.

National Observer also reported this month that the Canada Pension Plan Investment Board, a Crown corporation that manages more than $400 billion — including hundreds of millions of dollars worth of oil and gas companies — has just begun examining how much carbon pollution its holdings emit.

Smaller states 'now the ones who are paying for it'

The global scientific consensus is that if humanity doesn’t severely cut back on its carbon pollution, caused by the burning of coal, oil and gas as fossil fuels, it will face extreme sea-level rise affecting hundreds of millions of people, and more intense and frequent heat waves, droughts, freshwater availability and the extinction of many species, among other consequences.

“I think it’s not just what Mark (Carney) has suggested," said Scotland. "We’ve got to look at many, many different elements to see how can we make the sequestration of carbon a much more important issue at the top of people’s agendas.”

For the Commonwealth, the climate crisis means that smaller, more vulnerable states — who have not been responsible for the bulk of emissions in the industrial age — are nevertheless "now the ones who are paying for it,” Scotland argued.

In 2017, hurricane Irma knocked out power for more than a million people, left tens of thousands without drinking water, spun off dozens of tornados and was responsible for more than 100 deaths and tens of billions of dollars in damage. But hurricane Maria, a deadly storm which came soon after Irma that year, was even worse.

Maria devastated Dominica, Puerto Rico and the U.S. Virgin Islands — one of the worst natural disasters in history to affect that area, killing thousands of people and destroying hundreds of thousands of homes and $139 billion in damages. Puerto Rico is still recovering, two years later, and experiencing a painful “brain drain,” losing almost half a million of its residents, or 14 per cent of its population, as the storm convinced people to pick up and leave.

This year, hurricane Dorian became the worst natural disaster in the history of the Bahamas. It left tens of thousands homeless. Millions of gallons of oil spilled as a result of the storm and is now threatening freshwater. The country is still struggling to get electricity, running water, banks and grocery stores running.

“The consequence of these climactic episodes on our financial reality, and the ability that these countries will have in the longer term to meet the developmental needs of their individual citizens, is really quite shocking," said Scotland.

At the Commonwealth environment ministers meeting, the group put out a short statement committing to “tackle and reduce the devastating impacts of climate change on our countries’ peoples, economies, land and ocean environments.” They also said they would share ideas in order to “formulate multilateral actions across the Commonwealth.”

Scotland opened the meeting, noting that no country in the Commonwealth is unaffected by the effects of climate change. She also discussed the Climate Finance Access Hub, which so far has helped countries access US$27 million.

But financing gaps remain significant, she added. The hub is essentially operating on Australian and U.K. financial support.

Canadians go to the polls on Oct. 21 to elect a new Parliament, and in so doing, decide which political party will run the government. The decision will have a profound effect on how the country responds to climate change.

The governing Liberal party, led by Prime Minister Justin Trudeau, has for the first time established a countrywide price on carbon pollution, and coupled it with other significant environmental policies such as a crackdown on methane pollution from oil and gas operations and a clean-fuel standard to help decarbonize transportation.

The government, however, has continued to preside over the expansion of oil and gas infrastructure, including through subsidizing or purchasing assets, technologies or firms, the result of which critics say has slowed Canada's transition to a low-carbon economy.

The Liberals' principal opponents, the Conservative party led by Andrew Scheer, promise to undo most of this work, suggesting it is too costly and economically unfeasible. They would scrap the carbon tax and many of Trudeau’s other environmental regulations. They promise emissions cuts too, but have so far not revealed their precise calculations over how that might happen.

Scotland said she wouldn't weigh in on the “internal politics of any given country." But she did express support for policies that help combat the climate crisis. “What I will say is, that I am obviously very supportive and grateful of any country who wishes to try and put this climate change agenda further up their criteria of what is really important to them,” she said.

“The issue is that I think a number of countries have some internal conflicts, in the stresses and strains that they will go through in order to produce that which they aspire. And I think there are many countries who are in that position. But I will always be there to celebrate, and applaud, when they take steps which actually benefit climate and help us get this issue under control.”