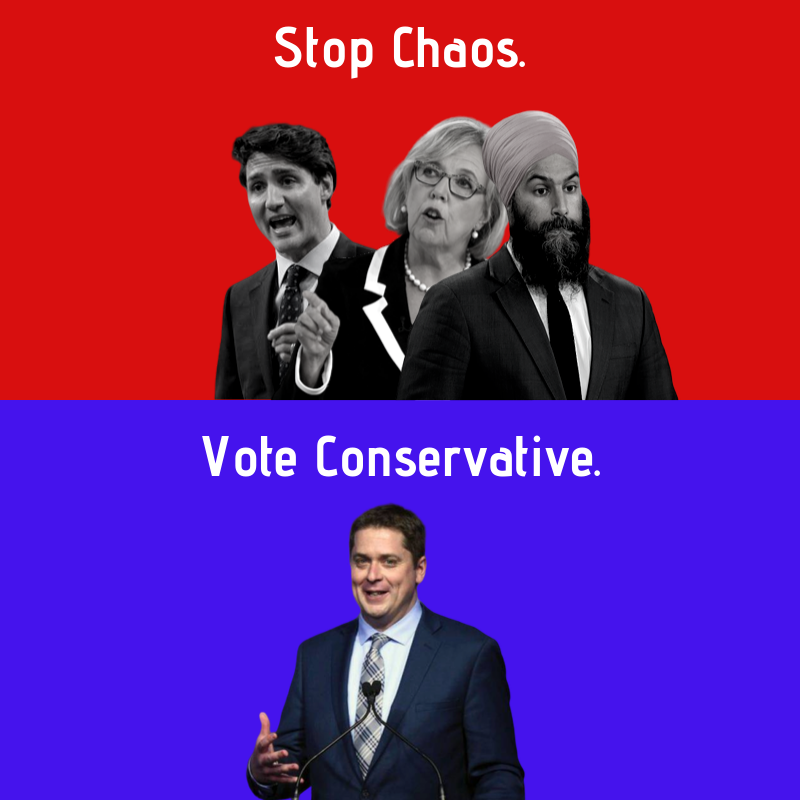 A meme from posted by Proud to be Canadian, a right-wing political meme page, on Oct. 15, 2019.
Previous story
Next story

If you’ve scrolled through Facebook in the past year, you may have encountered the right-wing meme machine.

The social media pages — whose names usually include the words “proud” or “strong” — started springing up in 2016, the year after Prime Minister Justin Trudeau and former Alberta premier Rachel Notley defeated conservatives and swept into power. They aren’t affiliated with any party, but spread anti-Liberal and anti-NDP messaging mainly through funny memes that seem designed to go viral.

You’ve heard of them for a reason. Fast-forward to the run-up to the Oct. 21 federal election, and these pages — some related, some not — have amassed significant influence on social media. Alberta Proud, for example, has more than 180,000 followers on Facebook, which is just over half the size of the following of the Liberal party but far more than the Edmonton Journal's 101,000. Another page called Ontario Proud — a loud voice in that province’s 2018 election — regularly clocks more social media engagement than many of Canada’s largest news outlets.

Though these pages’ folksy humour suggests they might have grassroots origins, interim financial filings to Elections Canada show they are often funded by corporations — which aren’t allowed to donate to political parties — and wealthy donors, who are limited in how much they can donate to parties and candidates.

Though Canada’s election law also imposes spending limits on third-party groups, such entities often serve as a way around the rules that apply to candidates and political parties, said Melanee Thomas, a political scientist at the University of Calgary and Ekin Fellow at the McGill Institute for the Study of Canada.

“Our election law is really, really ill-equipped to deal with this,” she said. “There are flags that pop up all over the place with it.”

Third parties also allow political parties to stay out of the fray.

In general, political parties in the current federal election have focused on positive ads about their own candidates, while third-party groups have taken on the bulk of the negative campaigning, a report by the Digital Democracy Project found.

‘Do we have a democratic right to lie to each other?’

Most regions in Canada have their own local “Proud” page, but there are national versions as well. They tend to fall into two camps. Ballingall’s group includes Ontario Proud, BC Proud and a national one called Canada Proud. These have been the focus of months of news coverage.

Groups like Canada Proud and Proud to be Canadian seem folksy, but they’re often backed by corporate donors. Here's what you need to know. #elxn43 #cdnpoli

Ballingall has said his pages were actually inspired by a friend’s success with Alberta Proud, a page that’s part of a different family of groups called Canada Strong and Proud. Headed by Chris Russell, a Newfoundlander who has a day job at an insurance company, the network includes a national flagship called Proud to be Canadian and regional affiliates like New Brunswick Proud and Ontario Strong, in addition to Alberta Proud.

Ballingall’s group of pages are technically not related to Canada Strong and Proud, despite their confusingly similar names. But their relationship isn’t entirely separate: Ballingall’s content-production company, Mobilize Media, has also done work for pages in the Canada Strong and Proud Network, the Globe and Mail reported (Mobilize Media is also the main vendor used by Canada Proud).

It’s not particularly surprising that these right-wing pages and their left-wing counterparts like North99 have been so popular, said Elizabeth Dubois, an assistant professor at the University of Ottawa who studies political uses of online media.

But the pages also tap into more intense feelings of political anger, frustration and anxiety. Content that taps into that frustration “fires people up,” Dubois said.

Those powerful reactions are heightened by the often-misleading content they share, Thomas said — to make information easily shareable and simple to digest, the format inherently lacks the ability to convey nuance and uncertainty. The result is a “slanted presentation” that has “very little information,” and is geared toward achieving a political goal.

“You can’t get full information with a meme,” Thomas said. “What they want is for people to be disinformed.”

One Alberta Proud post from July, for example, falsely says court judgments halted the Trans Mountain pipeline expansion because “one small oil tanker per day” from a new proposed marine terminal “might harm the local orcas.” ⁠In reality, though judges found issues with the government’s assessment of the risks to orcas, their primary issue was that the federal government had failed to fulfil its legal duty to consult First Nations.

Another post from the Canada Strong and Proud Network claims a carbon tax would result in “higher costs for families,” kill energy-sector jobs and support overseas oil and gas operations that are worse for the environment. The post is misleading: Canada’s budget watchdog found carbon tax rebates mean most families will get back more than they pay, experts say a decline in energy-sector jobs can’t be attributed to the price on pollution and the law includes measures to ensure Canadian companies remain competitive with overseas rivals.

National Observer has also previously fact-checked a post by Canada Proud that claimed “Canada could actually split up” after the Oct. 21 election, an idea experts said was “illogical.”

It’s unclear whether politically fuelled social media pages can actually sway elections ⁠— there aren’t many studies that have examined the phenomenon, Dubois said. In one case, a Facebook tool encouraging people to share the fact that they’d voted did boost election turnout. However, that 2012 study also showed that voters were mostly influenced by people they had close, real-life ties with.

“Do we have a democratic right to lie to each other?” she said. “There’s a legal vacuum on a lot of this.”

Many of the Proud entities also do surveys. In June, many Ontarians got a text message asking them to participate in a poll by Ontario Strong, a group that’s part of the Canada Strong and Proud network. Data collections allow third-party groups to engage in “micro-targeting,” a technique allowing political campaigns to aim their messages at key swing areas rather than blasting them out through TV or print ads, which are more expensive and reach a broader audience.

The pages often publish content duplicated or shared from their sister groups, a practice that has raised concerns in the past, as Canadian election law blocks third parties from splitting into multiple groups to get around campaign spending limits. In July, the Liberal Party wrote a letter to the federal election commissioner, alleging Canada Proud was co-ordinating with BC Proud.

Electoral officials in New Brunswick, meanwhile, are looking into Alberta Proud’s sister page in that province. In September, a local MLA complained that the group had “unethical” ties with the provincial Progressive Conservatives (election law also blocks third-party groups from co-ordinating with political parties).

An Elections Canada spokesperson told National Observer that, in general, the federal election commissioner is responsible for determining whether a third-party group is breaking rules. But that would only happen after the Oct. 21 election, and Elections Canada doesn’t comment on activities by individual groups.

Accountability can also be tricky when it comes to third-party groups. Political parties and their leaders have to face questions from the media, but since third-parties aren’t seeking office themselves, they have no obligation to do so.

Canada Proud, for example, has been nearly 37 per cent funded by four corporate backers, according to Elections Canada filings from Sept. 30. (Ballingall has previously said his group also received strong support from smaller donors, and that left-wing political groups are generally outspending right-wing ones.)

Beyond a disclaimer on the network’s social media pages network, the power structure behind its various pages isn’t clear.

Not all of the groups in the Canada Strong and Proud network have filed financial statements with Elections Canada. But filings from the ones who have show that the network is backed primarily by the Manning Centre, a pro-oil conservative think tank based in Calgary.

The think tank donated more than $300,000 to various groups in the network.

This week, the Manning Centre told the Globe and Mail it raised the cash by putting out a fundraising call to its network of donors. The think tank declined to disclose who those donors were. It’s legal for groups to raise money and donate the funds to third-party political groups, and they wouldn’t have to disclose the original source of the funds, Elections Canada said.

Canada Strong and Proud pages have also received donations from members of the pro-oil Modern Miracle Network. A National Observer analysis of Alberta Proud’s backers during the Alberta provincial election shows that just under a third of the group’s funding came from donors connected to the oil and gas industry. More than half of the money came from corporate benefactors, including real estate companies.

On its website, Canada Strong and Proud says that while Canada hasn’t always been perfect, “we were usually at the leading edge of making the world better” and “Canadians should be proud of our past.”

⁠In general, third-party groups that either accumulate donations upward of $10,000 or spend the same amount on campaign expenses are required to file interim financial returns before the election ends. All third parties have to file financial reports after the election.

If National Observer knows how many corporate backers there are for specific meme groups, why can’t you also tell us their names?

Hi Kenneth! No problem spelling out the names, it's all in public documents. They've been reported in the past, so it was more of a style choice not to list them this time. For posterity: Canada Proud's corporate backers are Merit Contractors Association of Canada, Peter Ekstein Holdings Inc., Yellowbird Products Limited and Coril Holdings Ltd. If you're interested, this link should take you to all of the third-party financial returns that have been filed so far: https://www.elections.ca/content.aspx?section=fin&document=index&dir=oth...

Thanks for the awesome

Thanks for the awesome coverage on this. So much mis-information out there!