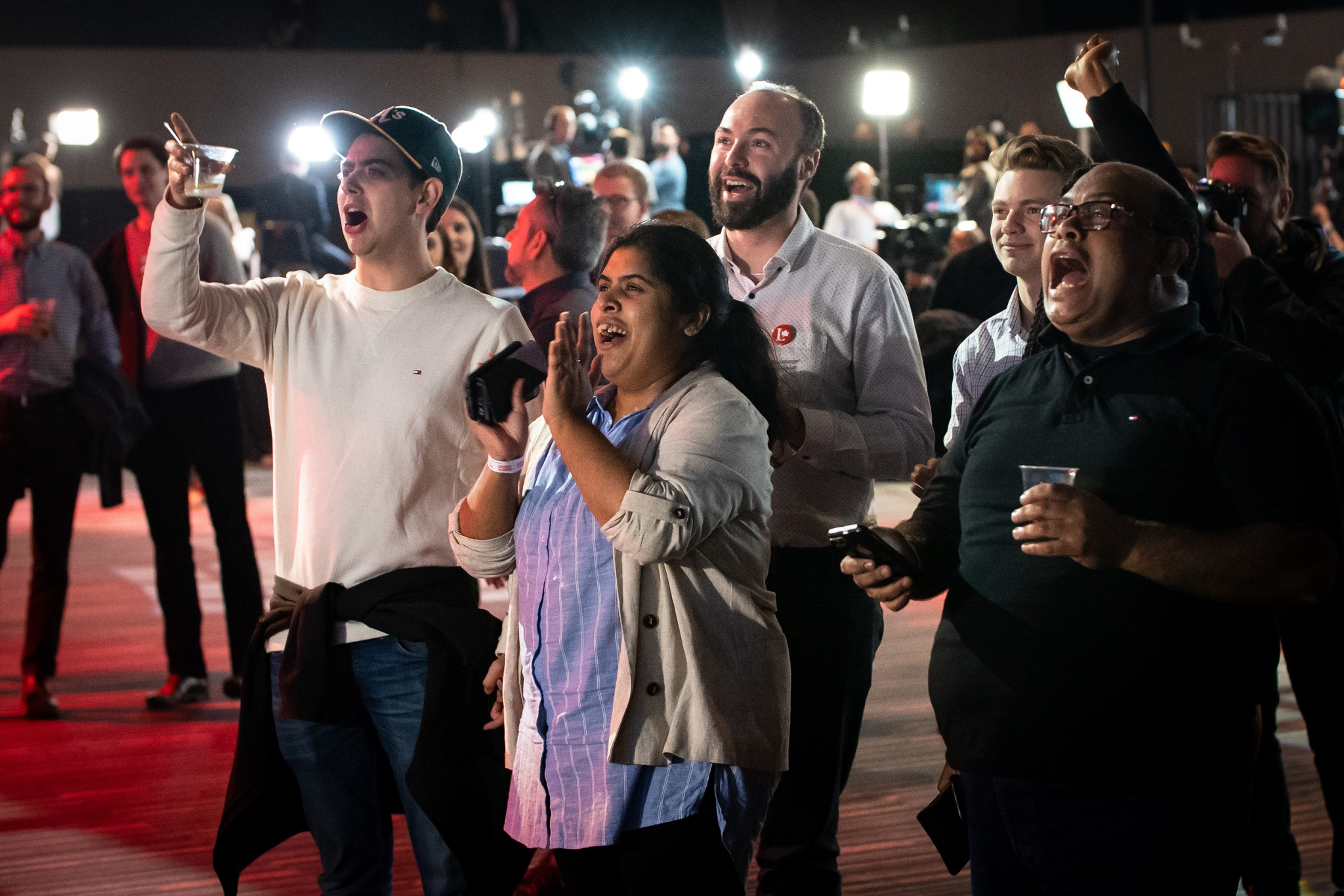 The governing Liberal Party had largely positive results in Monday night's federal election when it came to key politicians on environmental files, with the exception of Amarjeet Sohi, who had been the natural resources minister.

"With at least 63 per cent of voters casting ballots for parties that put forward strong climate platforms, it is clear that a majority of Canadians asked for more ambitious and urgent climate action," said Catherine Abreu, executive director of Climate Action Network Canada.

"People voted out of fear of the Conservatives today, rejecting their threats to roll back climate policy. At the same time, voters did not have enough confidence in the Liberal climate record to hand them another majority."

Catherine McKenna, the Trudeau government’s one and only environment and climate change minister, was re-elected in her riding of Ottawa Centre on Monday.

As of 11:50 p.m. ET, McKenna was leading the NDP's Emilie Taman by over 8,000 votes, or 47 per cent. The Conservative Party candidate, Carol Clemenhagen was in a distant third.

Over the last four years McKenna was tasked with stickhandling a difficult balancing act — promoting the Trudeau government’s carbon pollution pricing regime while backing the government's purchase of the Trans Mountain pipeline and expansion project.

She became the face of Prime Minister Justin Trudeau’s environmental battle early on, a position that would give her an enormous public profile.

Months after the Trudeau government signed a climate plan with the provinces, McKenna was contending with legal threats from Saskatchewan in early 2017 as she asserted the federal “right” to price pollution. (So far, courts have upheld that right; Ontario’s case is being appealed to the Supreme Court.)

As right-leaning politicians tilted against environmental policies across the country, winning provincial elections in Alberta, Ontario and elsewhere, they often invoked McKenna's name personally. Online trolls targeted her; the abuse drifted into the real world and led to the minister requiring protection.

In a bid to perhaps differentiate her candidacy from the rest of the Trudeau team, McKenna put up unusual election signs in colours like bright pink, black and white that sported phrases such as “vote for gun control” and “vote for public service jobs.” Former Liberal prime minister Jean Chretien also campaigned with McKenna.

Taman, a former public prosecutor, battled McKenna for control of the young, densely populated riding. Taman had been the NDP’s hope to bring Ottawa Centre back to the party, after McKenna scored an upset victory in 2015.

The riding is filled with many young professionals who work in the city’s downtown, as well as young families who want to live in the core of the city. It was considered a toss-up through the last hours of the campaign.

This year, Taman ran on a campaign emphasizing inequality, the climate crisis and confronting intolerance.

Atwin, who ​has worked in First Nations education, had the wind at her sails, boosted by Green success in the region. New Brunswick Green Leader David Coon, for example, has held the provincial riding of Fredericton South since 2014.

The Greens also made a breakthrough provincially in P.E.I., capturing over 30 per cent of the vote and securing eight seats. Greens also elected their first Ontario MPP, and in spring, a second federal Green Party MP was elected.

Atwin was able to beat Liberal incumbent Matt DeCourcey as well as fight off Conservative candidate Andrea Johnson. CBC News said Atwin had won at 11:45 p.m. ET with 14,318 votes or 33.3 per cent.

Atwin ran as a provincial Green in 2018 and campaigned on healthcare with a focus on mental health. She worked with Oromocto First Nation and their students attending Oromocto High School, and Kingsclear First Nation and their students at Fredericton High School, according to the Brunswickan, and carried out educational research on behalf of Indigenous communities in New Brunswick.

When Stephen Guilbeault described his decision to leave the environmental activist world and run for the Liberals recently to the National Post, he summed it up as “been there, done that, got the T-shirt.”

On Monday, it was clear this position paid off for Guilbeault, as he coasted to victory in his riding of Laurier–Sainte-Marie.

The populous, small riding was held by the NDP’s Hélène Laverdière, who announced she would not run in 2019. Laverdière took the riding away from former Bloc leader Gilles Duceppe.

It is the third-most dense riding in Canada, and younger and poorer compared to the average across the country. Guilbeault fought off a challenge from the NDP's Nimâ Machouf.

Guilbeault stunned the environmental activism community when he decided to run for the Trudeau camp. Guilbeault, who has protested pipelines, formerly worked as an activist for Greenpeace before co-founding Quebec environmental organization Equiterre.

He benefited from massive name recognition, but also found himself campaigning for a government that bought the Trans Mountain pipeline expansion project. He explained his position as a desire to support the Liberal environmental package as a whole.

“If you only look at a tree, you lose sight of the forest,” he told CTV News. “I understand why some people are so angry about the pipeline...you have every right to be angry but look at the whole picture.”

Sohi, the former three-term Edmonton city councillor was in a tough fight against Uppal, who Sohi beat in 2015 by just 92 votes, in a race that went to judicial recount.

Sohi was one of only three Liberals in Alberta, along with fellow Edmontonian Randy Boissonnault and Calgarian Kent Hehr. The Liberals have been polling far back in second place in the prairies.

In his first ministerial job, Sohi showcased billions of dollars in funding for major infrastructure initiatives, some of which involved mega-projects like light rail developments that the Liberals were hoping would cut carbon pollution.

But after he was shuffled into the natural resources profile, he found himself defending many policies that had become political roadkill in his home province of Alberta.

The Trans Mountain oil pipeline snakes through Alberta and British Columbia to end up at the Burnaby Terminal in the Vancouver area.

Throughout the election it has cast a political shadow over the riding — but Terry Beech, the Liberal incumbent, was leading in his riding of Burnaby North-Seymour late into election night.

Beech, who won the riding with 36 per cent in 2015, battled it out this election campaign with Svend Robinson, a 25-year former MP, as well as Heather Leung, who was a Tory candidate but was dropped due to comments deemed offensive.

He voted against the pipeline project, and has maintained that his constituents don't support it.

Robinson, who suffers from bipolar disorder, was planning a political comeback. His career was disrupted after he stole an engagement ring from an auction and pleaded guilty to theft over $5,000 in 2004.

Burnaby North-Seymour is smaller and less dense than average. It is richer than the average across the country, and well-educated, with more than half holding postsecondary degrees.

Jonathan Wilkinson, the Trudeau government’s fisheries minister and the former Parliamentary secretary for the environment to Catherine McKenna, hung on to his riding of North Vancouver.

In 2015, Wilkinson, a former constitutional negotiator, beat out former Harper government Parliamentary secretary for finance Andrew Saxton, who had held the seat between 2008 and 2015. The riding had been reliably conservative until 2004.

Like Sohi in Edmonton, Wilkinson faced a rematch in his riding with Saxton. The Liberal minister, who helped promote the government’s multi-billion dollar Oceans Protection Plan, accused his People’s Party opponent of spreading misinformation this campaign.

Editor's note: This story was updated at 4:51 p.m. ET on Oct. 23, 2019 to include additional information related to Jenica Atwin.