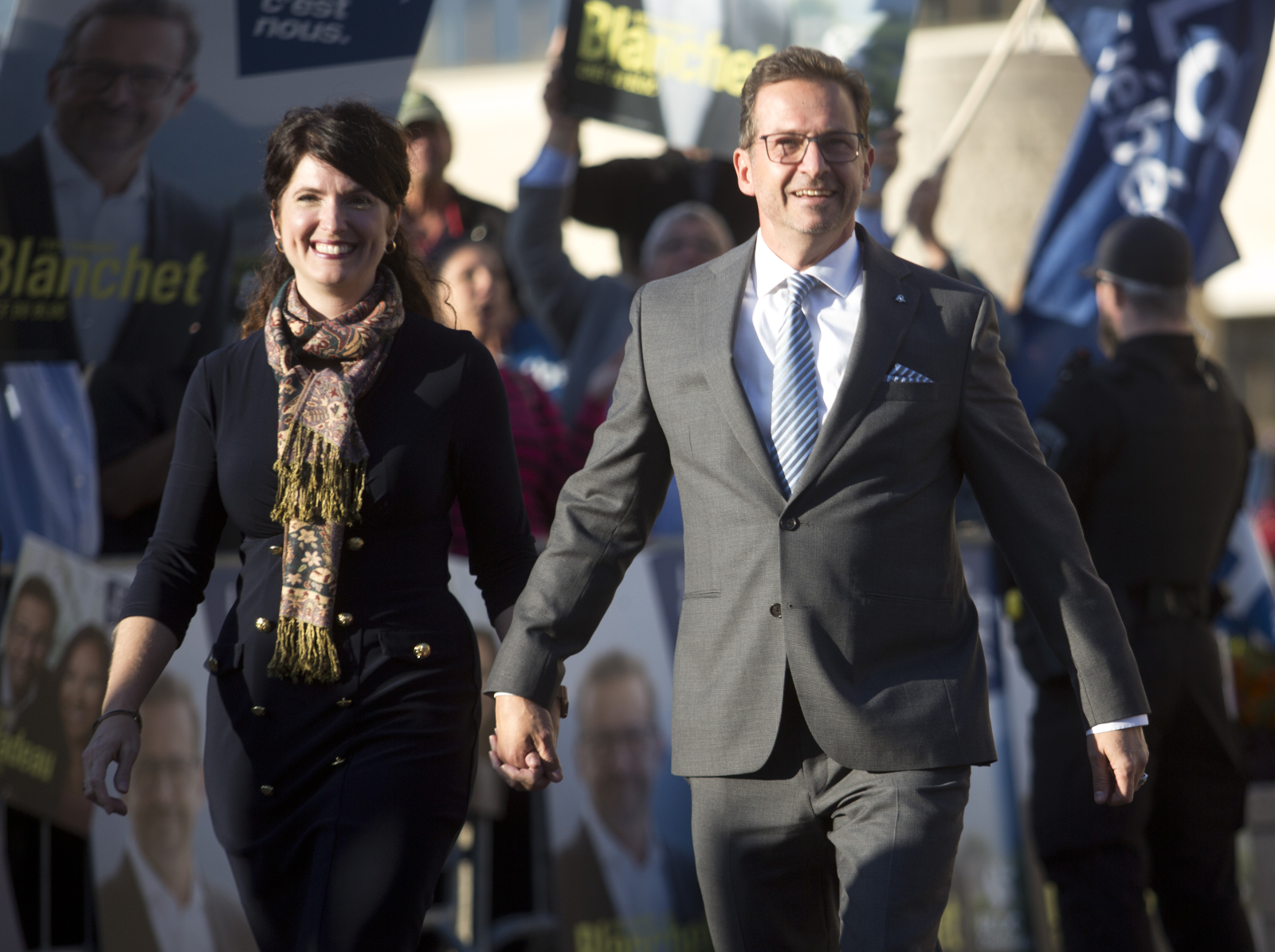 Bloc Quebecois leader Yves Blanchet and his wife walk into the official leaders' debate in Ottawa on Oct. 7, 2019. Photo by Andrew Meade
Previous story
Next story

As polls had predicted, the Bloc Québécois has swept Quebec, erasing all the impact of the NDP’s 2011 Orange Wave.

The Bloc was left with just four MPs after the NDP’s stunning victory. In 2015, that number rose to 10. On Monday, they won 22 more seats to hold 32 seats.

The Bloc victory stopped the Conservative Party’s hope of forming government. The Conservatives needed to make gains in Quebec but instead, they lost two seats from what they had won in 2015. Andrew Scheer’s performance in both the English and French language debates set the polls in Quebec into a dive that he could not recover from.

But the biggest loss of the night was the NDP, who went from 15 seats in 2015 to just one. Popular NDP candidates Ruth-Ellen Brosseau from the riding of Berthier-Maskinongé and Guy Caron from Rimouski-Neigette-Témiscouata-Les Basques both lost their seats to the Bloc. Former NDP-turned-Green Party candidate Pierre Nantel also lost his seat.

The Liberals held on to enough seats, likely allowing them to form a minority government. They won five fewer seats than in 2015. They swept most of the island of Montreal and kept their two seats in Quebec City. Co-founder of the environmental organization Equiterre Steven Guilbeault won his seat in the riding of Laurier-Ste-Marie in Montreal.

The best result of the night was that Maxime Bernier lost his own seat in the Beauce. Originally elected to the Conservative Party, Bernier took the seat from his father, a popular local politician. When he ran for leader of the Conservatives, not even his own riding supported his candidacy. His loss wasn’t too surprising — his opposition to Canada’s milk management system made him unpopular in dairy farming communities across Quebec — but it spells the end for any remaining doubt about his party’s legitimacy.

Bernier never should have received the coverage that he did, and far too many journalists treated him like a serious candidate. The media created Bernier and gave him power; power that he never merited. His presence in the debates and the fact that many platforms ran his concession speech demonstrates that Canada’s journalists are ill-equipped to cover the rise in the far right. Thanks to the attention Bernier received, it created the illusion that he had more support than he really did, and even though his loss shouldn’t be a surprise, it has surprised many who thought that his seat was going to be the only one that his party could win.

It is also likely that journalists outside Quebec won’t know how to treat the Bloc’s victory. Where they victorious because of racist rhetoric made possible by Quebec’s religious symbols bill?

Caroline Desbiens, one of the four Bloc candidates who was found to have made Islamophobic comments in the past won her election in the riding of Beauport-Côte-de-Beaupré-Île d'Orléans-Charlevoix, east of Quebec City, for example. The other three lost to the Liberal and Conservative candidates.

Quebecers have had almost a decade break from the Bloc and a constellation of forces, from the strong performance of Yves-François Blanchet, to their strong environmental platform and their play to xenophobia all helped, writes @NoLore.

Or, was the Bloc victorious because they have simply been waiting for the right conditions to make a come-back?

Quebecers have had almost a decade break from the Bloc and a constellation of forces, from the strong performance of Yves-François Blanchet, to their strong environmental platform and their play to xenophobia all helped.

Their victory was a mix of all three factors and how these forces will influence the Bloc’s performance in government will depend on how the parties work together, and the political priorities of the provincial Coalition Avenir Quebec. The Bloc’s role is to represent the will of Quebecers and if that will is expressed in one way at the national assembly, it will be similarly expressed in Ottawa.

The good news for Canadians is that the Bloc’s support has helped create a minority government, where all parties except the Conservatives are united in the need for climate action. The Bloc, the NDP and the Greens will have the power necessary to force the Liberals to improve their environmental policies, if the parties can figure out how to work together.

The next few years under this government will be driven by social forces. As the parties vie for popularity, social movements will find that their voices not only matter, but can influence government policy. Just weeks ago, more than 500,000 people marched in the global climate strikes, the vast majority of whom marched in Quebec.

Tonight’s real winner is the climate, as long as activists exert the pressure necessary to force the minority government into action.