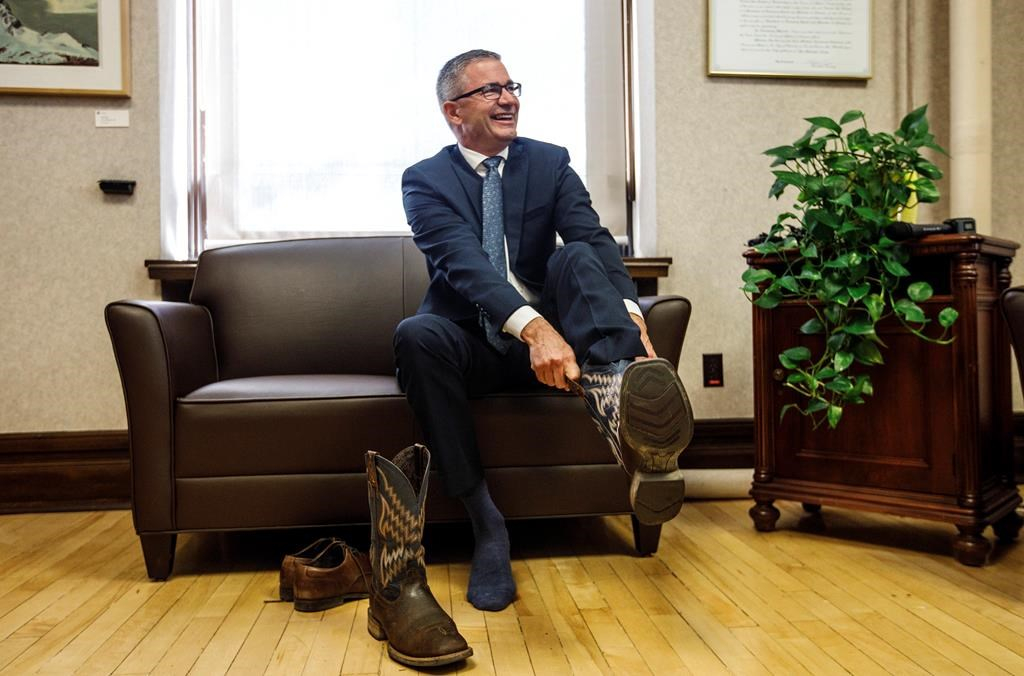 Alberta Finance Minister Travis Toews puts on a pair of cowboy boots during a pre-budget photo op in Edmonton on Wednesday, Oct. 23, 2019. Photo by The Canadian Press/Jason Franson
Previous story
Next story

But Kenney, in a TV address Wednesday night, reiterated that health and education funding will not be reduced and maintaining front-line services is a priority.

"This will be a challenging budget. It will not be easy," said Kenney, adding the exact reduction figure is 2.8 per cent.

"These are necessary decisions. In fact, I would argue that they are long overdue. We must embrace transformative change to get a smarter government. That's not going to happen overnight."

The budget is the first one by Kenney's United Conservative government since it defeated the NDP in the spring election.

Kenney has promised the budget will be a landmark spending document that will balance the books in four years and reorient Alberta's economy long after that.

He has pledged to get it done by getting more value for public money while reducing overall spending and ending a recent run of multibillion-dollar deficits he says threaten to cripple future generations with unsustainable debt.

"If we don't act decisively now, we will face far bigger challenges in the future," Kenney said.

The premier did not get into specifics, but said the impact on public service jobs will be "modest" with the overall size of government being reduced mainly through attrition.

He said some capital projects will be delayed or scaled back and that inefficient programs will see reduced funds or be changed or scrapped. There will be increased funding for mental health, addictions and some social programs aiding the most vulnerable, he added.

The former NDP government ran four years of multibillion-dollar deficits as it worked to match services with population growth while embarking on an ambitious program of repairing and building infrastructure — all as sluggish oil and gas prices squeezed the bottom line.

Alberta ran a $6.7-billion deficit in the last fiscal year that ended in March on $48.4 billion in operational spending.

MacKinnon's panel reported back in August that the province is spending more per capita for public services than comparable regions and getting poorer outcomes.

The operational budgets of health and education alone represent close to 60 per cent of total program spending.

Kenney has promised to rein in spending while growing the economy by delivering incentives to the private sector to create jobs. His government has already passed legislation to cut the corporate tax to eight per cent from 12 per cent over four years.

The NDP, now in Opposition, calls it a regressive plan that rewards corporate friends, has not created jobs and is likely to reduce services and supports for those who can least afford it, including students and people relying on disability payments.

Notley said Albertans can expect downloaded costs in the budget. A recent proposal from the province has suggested that rural municipalities pick up some or most policing costs, and the MacKinnon report has urged the government to remove a cap on tuition.

"(Kenney) told you he was going to cost you less, but you're actually going to pay more," said Notley.

"You're going to pay more in property taxes, in school fees, in tuition, for insurance (and) for home heating.

"You will pay more unless you're a wealthy corporation."

Earlier Wednesday, Finance Minister Travis Toews pulled on a pair of size 10 cowboy boots as part of a tradition among finance ministers to showcase footwear before the budget.

"This will be a thoughtful, surgical budget," he said, adding his boots, like the budget, reflect the heritage, resilience and self-reliance of Albertans.