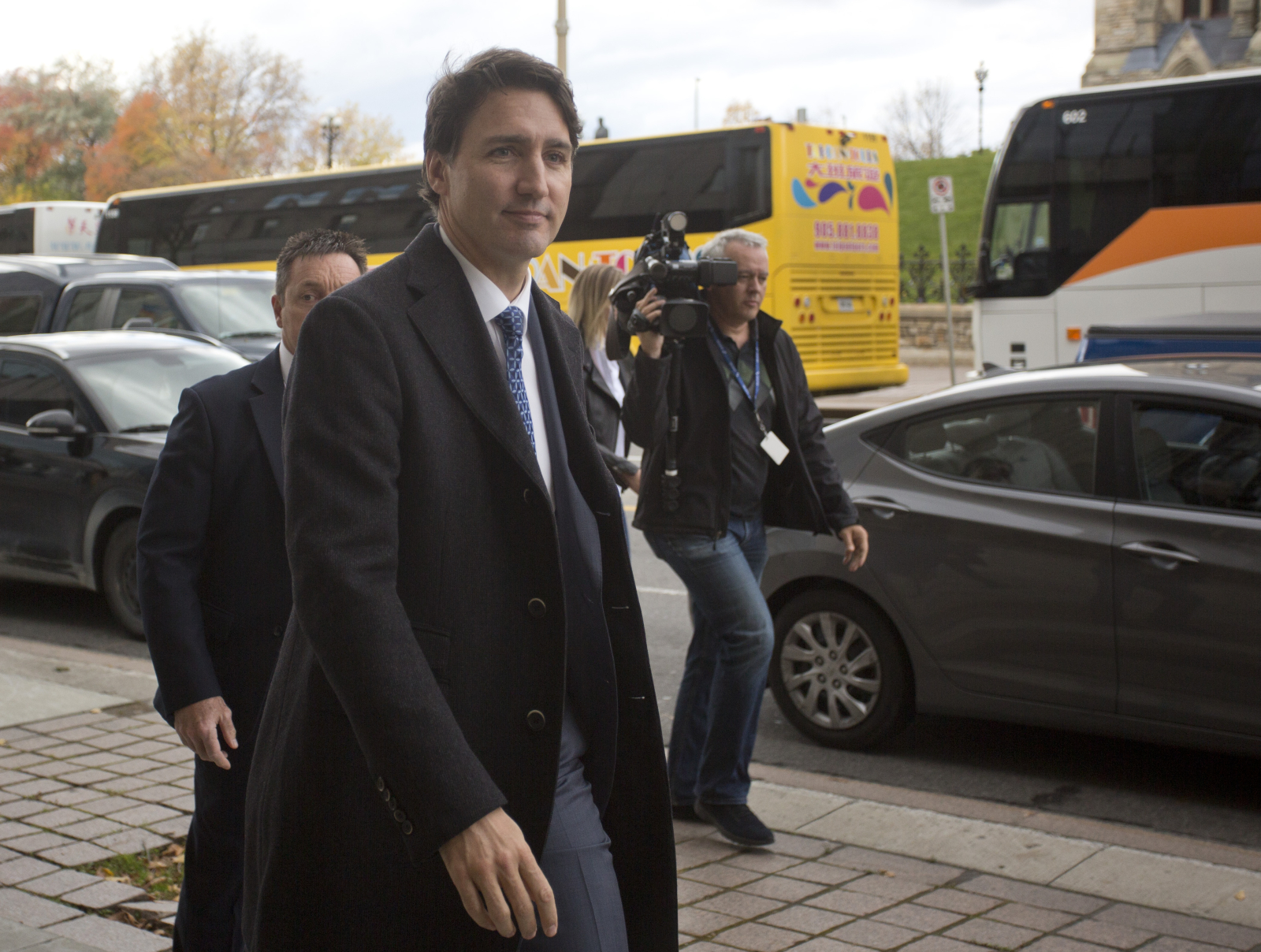 Prime Minister Justin Trudeau walks from the press theatre in Ottawa after speaking with reporters on Oct. 23, 2019. Photo by Andrew Meade
Previous story
Next story

When Perry Bellegarde stood with Justin Trudeau in 2015 in the early days of the Liberals’ first term, he described reconciliation as “a new word that everybody's talking about.”

On Wednesday, speaking to reporters for the first time since being re-elected, the prime minister mentioned he had spoken once again with the Assembly of First Nations leader — and then gave a faint echo of those words from four years ago.

“We will continue to engage with Indigenous leadership across the country, Indigenous communities, strong voices to ensure that reconciliation isn't just a word that we use,” Trudeau said at his press conference in Ottawa.

The subtle reframing of reconciliation from “a new word” to not “just a word” illustrates the challenge facing Trudeau when it comes to Inuit, Métis and First Nations rights, as he prepares to welcome a new cabinet on Nov. 20 and begins the difficult task of governing with a minority Parliament.

The Liberals point to their record of ending long-term boil water advisories, major investments in Indigenous youth, bills protecting Indigenous languages and child welfare, an Inuit apology and Chief Poundmaker exoneration, and the implementation of some Truth and Reconciliation Commission (TRC) recommendations, among other accomplishments.

Bellegarde himself said this week that the government had accomplished more for Indigenous rights than any other in its first term. “I think there’s going to be more pressure on Prime Minister Trudeau to make Canada work, so it works for everybody, including First Nations people,” he told the Globe and Mail.

Still, the disillusionment felt by many was thrown into stark relief during the election campaign when it was announced that the government would challenge a human rights ruling to compensate First Nations children who were horrifically taken from their homes as part of the on-reserve child welfare system.

While Trudeau has said he agrees with the ruling and is committed to finding a solution, the decision rang similar to the Liberals' stalled progress on an Indigenous rights framework, or Canada's failure to fulfill its legal duty to properly consult First Nations over the Trans Mountain oil pipeline.

Indigenous women and girls also continue to be murdered and disappeared at astonishingly high rates, despite the finding by a national inquiry that violence against them and two-spirit, lesbian, gay, bisexual, transgender, queer, questioning, intersex and asexual people “amounts to a race-based genocide."

"I've heard the critiques that we need to be doing more, and I agree with them," Trudeau said when National Observer asked what it meant to him that reconciliation shouldn't be just a word.

"I am impatient as well about closing the gaps, about moving forward on economic opportunities, on better support and Indigenous-led systems of support for their communities,” he added.

“We have moved forward in a meaningful way on a broad range of issues and local successes across the country on reconciliation, but there is much more to do...that is going to be my focus on Indigenous relations because no relationship is more important to me than the one with Canada's Indigenous peoples.”

Trudeau commits to reaching out to Westerners

Throughout his remarks, the prime minister sought to emphasize two priorities: “the fight against climate change and affordability.” He repeated those two elements several times in his answers to various questions.

Trudeau also discussed how he would address the fact that the Liberals were shut out of Alberta and Saskatchewan this election.

He said it was “extremely important that the government works for all Canadians” and he would be reaching out “specifically to Westerners to hear from them.”

Alberta Premier Jason Kenney and Saskatchewan Premier Scott Moe both released open letters to Trudeau following his election. The letters contained various demands: Kenney wants to see an energy corridor built across the country; while Moe called for a “new deal” including scrapping the carbon pollution pricing regime that Trudeau put in place.

“I spoke with both premiers of Alberta and Saskatchewan yesterday, but I'm also speaking with people like (Calgary) Mayor Naheed Nenshi and others to talk about how we can make sure that the concerns, the very real concerns of Albertans are being addressed and reflected by, by this government,” Trudeau said.

“This is something that I take very seriously as a responsibility to ensure that we are moving forward in ways that benefit all Canadians, and I will be listening and working with a broad range of people to ensure that that happens.”

Trudeau also recommitted to building the Trans Mountain pipeline expansion. The pipeline system is now owned and operated by the government. “Getting our resources to markets other than the United States and getting that done as quickly as possible remains a priority for us,” he said.

And he ruled out either a “formal” or “informal” coalition with other political parties to pass legislation in Parliament, saying instead he would sit down with party leaders and talk about “priorities.”

Three weeks to weigh in on proposed pipeline