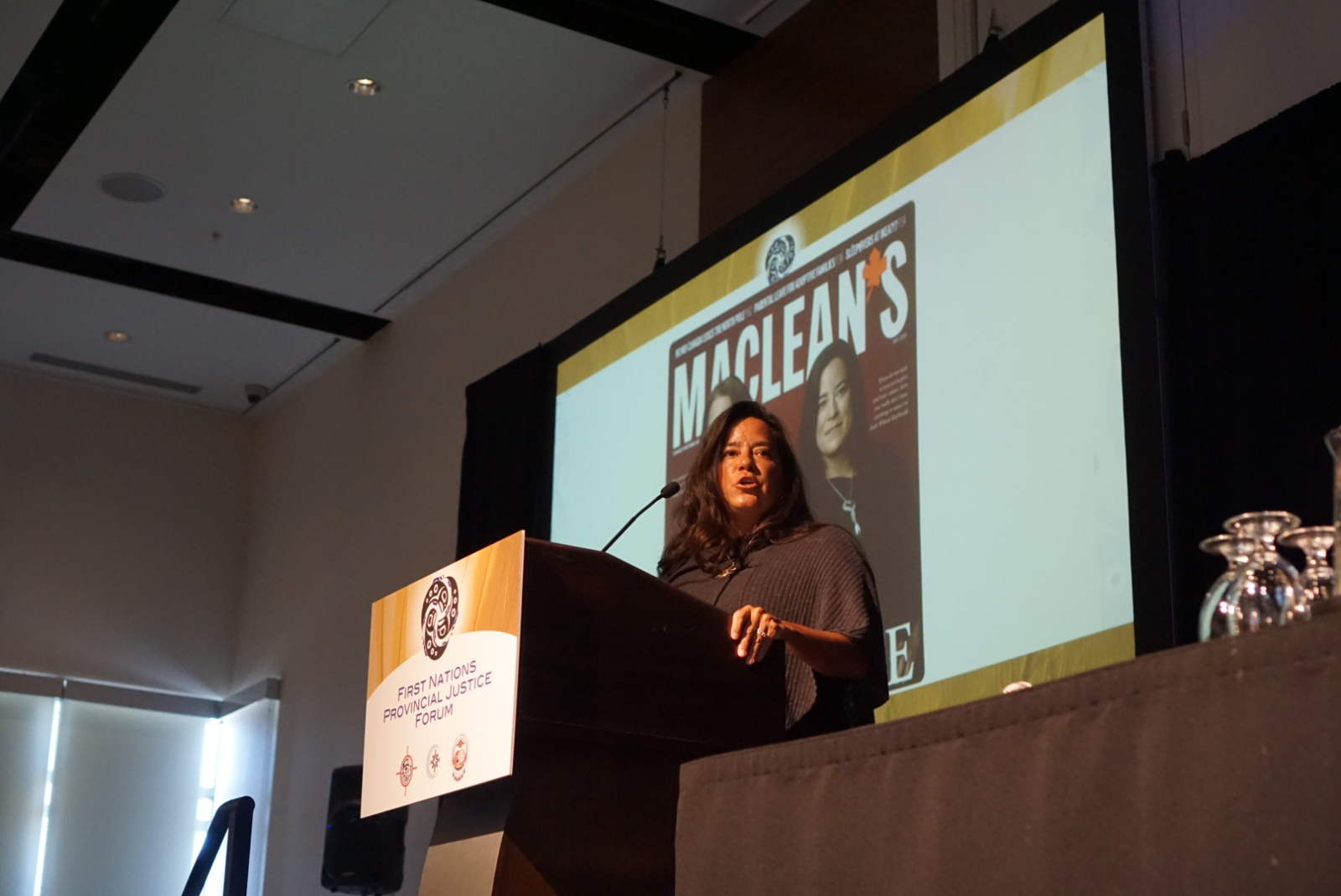 Jody Wilson-Raybould said she fears the federal Liberal government from which she was recently ousted has “fallen back” on recognizing Indigenous rights and that the pace of judicial reform is “not fast enough or as well-coordinated as it could be."

The former justice minister identified multiple shortcomings such as the Liberals' stalled progress on a new Indigenous Rights Framework and lack of funding for First Nations to pursue self-government during her speech at a B.C. justice forum on Wednesday. All of these issues were being pursued while Wilson-Raybould was in cabinet and the government has continued to work on them without her after she resigned in February.

Wilson-Raybould said that more federal funding would help create more Indigenous courts along the lines of the six developed in partnership with B.C's provincial government.

Both women were removed from the Liberal caucus earlier this month by Prime Minister Justin Trudeau after speaking out about the pressure his office and others put on Wilson-Raybould to intervene in a corruption case involving Quebec construction company SNC-Lavalin.

Attendees lined up to take photos with Wilson-Raybould and Philpott before their speeches began. Many people used Wilson-Raybould's Kwak'wala name, Puglaas. After their speeches the council held an honouring ceremony for the two former ministers, and women in the room gathered to sing the Women’s Warrior Song.

In her speech, Wilson-Raybould referred to Trudeau’s remarks to the House of Commons in February 2018 when he promised to implement a new Indigenous Rights Framework by the end of 2018. Many people were skeptical of what it would entail, but before more details were announced, the Liberals delayed the legislation until after the next federal election, which is due by October.

In his 2018 speech, Trudeau said “we need to get to a place where Indigenous Peoples in Canada are in control of their own destiny, making their own decisions about their future.”

“As you all know, this has not occurred,” she said. “I fear we may have temporarily fallen back into a less audacious, less meaningful conversation...the federal government has fallen back once again into a pattern of trying to ‘manage the problem’ with Indigenous peoples and make incremental, intermittent shifts rather than reforming the status quo.”

She said she faced resistance to implementing her final directive as justice minister on civil litigations with Indigenous Peoples, which she began working on in 2017 and issued in January this year. The directive included recommendations on how to incorporate rights-recognition and reconciliation into litigation, and to "promote cooperation over adversarial processes".

In her speech, she said some people in government were fearful of shifting norms of the court, but she didn't name who she was referring to. Former principal secretary Gerald Butts submitted texts with Wilson-Raybould to the House Justice Committee in the aftermath of the SNC-Lavalin scandal.

In the texts, she said she was going to announce the directive after addressing all the concerns her cabinet colleagues raised over the prior six to eight months and that "I am confident we are in the right place." Butts didn't demonstrate any open resistance.

Later, following a pivotal December meeting at the Chateau Laurier in Ottawa, Butts texted Wilson-Raybould to say it was nice to see her.

“Nice to see you too," Wilson-Raybould replied. "Thx for the convo. Please say alo to PM. Heard him speaking my language in his speech... Good luck in Montreal — we stick to our guns/plan we will be good.”

In Wilson-Raybould's address on Wednesday she said the federal government must recognize Indigenous law as an equal part of “a multi-level system of evolving cooperative federalism” before issues like incarceration, children in care and land claims can be resolved.

She concluded by telling the Justice Council, “I look forward to seeing how your [Indigenous justice] strategy continues to develop and how it is implemented over the coming years, and how it will affect this much-needed transformation.”

The council is focused on over-representation of Indigenous people in incarceration and Indigenous children in care. They invited Indigenous leaders from across the province to the two-day forum to collect their insight on how to best address these issues.

Wilson-Raybould was justice Minister until recently and was offered Indigenous Affairs which she refused. Now she complains about slow progress? Look in the mirror. And let's have the First Nations take some responsibility for failure and slow progress, on most things the 600 plus "Nations" that make up the first Nations can't agree on anything amongst themselves so it will be slow and they are a big part of that as is JWR.

The memo you missed is that

The memo you missed is that the mandate of Indigenous Services Canada is to implement the provisions of the Indian Act, a piece of legislation that was oppressive to First Nations in many ways such as outlawing cultural practices (i.e. potlatches) and imposing governance structures that conflicted with FN's traditional governance structures. Jody Wilson-Raybould and her family fought to reform or eliminate the Indian Act well before she was courted to join the Liberal Party, and in his testimony before the committee Gerald Butts acknowledged in hindsight that offering the ministry of ISC to JWR wasn't a wise decision - me, I'd call it a dumbass tone-deaf blunder that would have tipped JWR off to the fact that Trudeau and his coterie were at best paying lip service to indigenous issues rather than really trying to understand and deal with them. The minister that made the most progress in resolving serious issues facing the First Nations was Jane Philpott. In one fell swoop Trudeau got rid of his 2 most effective ministers... but then, clearly he's more interested in ass-kissers than people who do a good job.

Who cares what JWR and JPot

Who cares what JWR and JPot have to say. JWR should have taken the IND. AFF portfolio when she was offered it. She and sidekick Jane have become tedious symbols of entitlement. There is no entitlement room in public office.

Thanks for your colonialist,

Thanks for your colonialist, click-bait viewpoint, not.

Jody and Jane simply acknowledge the fact that our Liberal government will never implement UNDRIP, even though it promised to, because it dramatically alters the playing field: environment exceeds economy. The Liberal government fears the consequences and resulting lost votes. Same for the federal Cons. We need an honest and just government to recognize Aboriginal rights and climate justice.