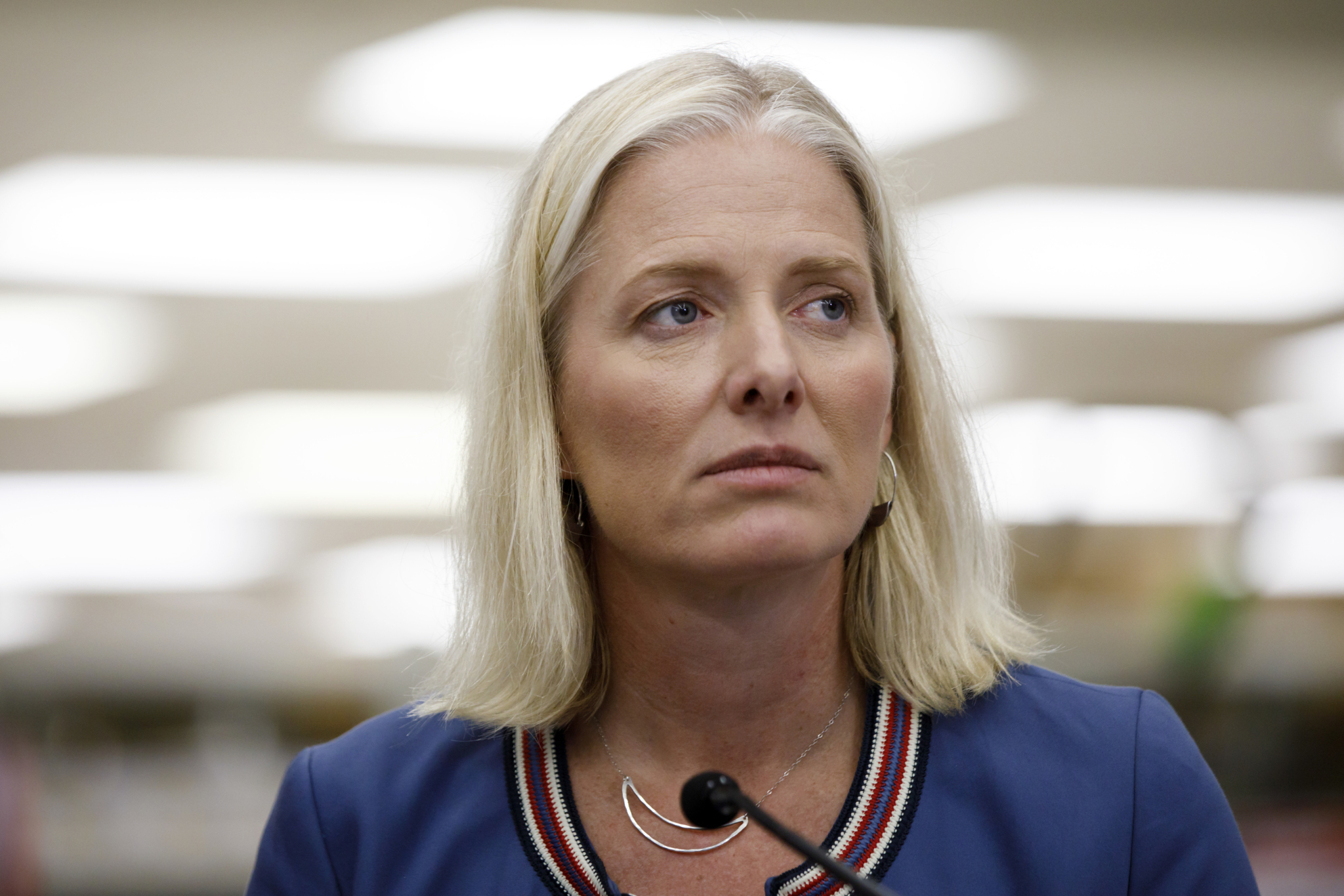 Catherine McKenna, Canada's Minister of Environment and Climate Change speaks during an event in Toronto, Ont., on Aug. 27, 2019. Photo by Cole Burston
Previous story
Next story

Three days after the election, a blown-up photo of Catherine McKenna on the front window of her campaign office was defaced with a vulgar four-letter slur painted in deep red letters.

The Ottawa Centre MP, who served as environment minister for the last four years, was speechless in her reaction to seeing “c--t” written over her face, but wasn’t surprised,

"It's the same as the trolls on Twitter. It needs to stop,” McKenna told reporters Thursday, six weeks after she had to employ security personnel after a passerby in a car attacked her and her children outside a movie theatre by yelling “F*** you, Climate Barbie.”

McKenna has spoken publicly time and again in recent months about the intensity of her social media engagement — so much so that it prompted one climate scientist to explore what was happening more closely.

A data analysis by Conor Anderson, a PhD candidate in the Climate Lab at the University of Toronto, found that replies to McKenna’s tweets have intensified significantly — in both their level of frequency and in offensive nature — since April 1, 2019, the day the federal carbon tax took effect in Ontario, Saskatchewan, Manitoba and New Brunswick.

That day was also the day the largest volume of tweets were sent her way in her four-year tenure.

Of these replies, the most came from what appear to be anti-Liberal users or accounts such as Friends of Science, a Calgary organization that argues climate change is nothing close to a global emergency, and falsely claiming that it isn’t caused by people or carbon emissions but rather the sun. Human activity such as the burning of fossil fuels has caused 100 per cent of the global heating since 1950, according to the Intergovernmental Panel on Climate Change’s fifth assessment report.

The content of these replies focused on the carbon tax, but also waged a huge number of hateful attacks that were both personal and professional.

Ironically, the third-most replied-to-tweet over McKenna's four years was one in which she denounced twitter attacks.

And since then, it’s only gotten worse.

“It is easy to see that tweets directed at McKenna have become more negative, both in terms of volume and proportion,” Anderson told National Observer. “With this negativity has also come abuse.”

Anderson examined 13,170 Twitter replies to McKenna’s tweets from Nov. 4, 2015, (the day McKenna was appointed environment minister) to Sept. 8, 2019 (the day McKenna announced she required security. He looked at who the most frequent responders were and the nature of the messages McKenna received, both good and bad.

There are limitations to this data: deleted or blocked tweets are not included, for one. The data also doesn’t include direct tweets sent to McKenna. But Anderson said for the most part the data shows a troubling trend between climate conversations and online vitriol.

McKenna is a heavy Twitter user, Anderson said, which has inadvertently made her a high-profile public persona. Her most active days have coincided with major environmental moments: the June 5, 2018, World Environment day or the day she defended the federal carbon tax after Saskatchewan decided to challenge the policy in court.

A sentiment analysis — that is an analysis of whether a tweet reply was positive or negative — shows that the replies have gotten disproportionately offensive over time, a huge majority of which employ sexist slurs.

The most commonly used of these slurs, according to Anderson’s research, is “Climate Barbie” — a term first used in Canadian politics in 2017 by Tory MP Gerry Ritz, who later apologized for doing so. The phrase appears as early as mid-2016 in The Rebel, a Canadian far-right website.

Anderson’s analysis shows that replies to McKenna using “Barbie” peaked on the day of the carbon tax implementation.

“No one should have to put up with abuse, no matter their position or their politics,” Anderson said. “I applaud Minister McKenna for her perseverance and dogged dedication to her portfolio. She puts up with so much abuse in the interest of remaining accessible to Canadians via Twitter.”

Editor's note: this story was updated on Oct. 25, 2019 at 10:33 a.m. to accurately reflect the number of times McKenna's Twitter replies mention "Barbie." It was also updated to include the fact that "Climate Barbie" first appeared in The Rebel.

A landslide win for climate politics. Now beware its nemeses

Thanks so much for this

Thanks so much for this analysis. We/I knew targeting McKenna was horrific, this puts it into hard relief. We must do so much better.