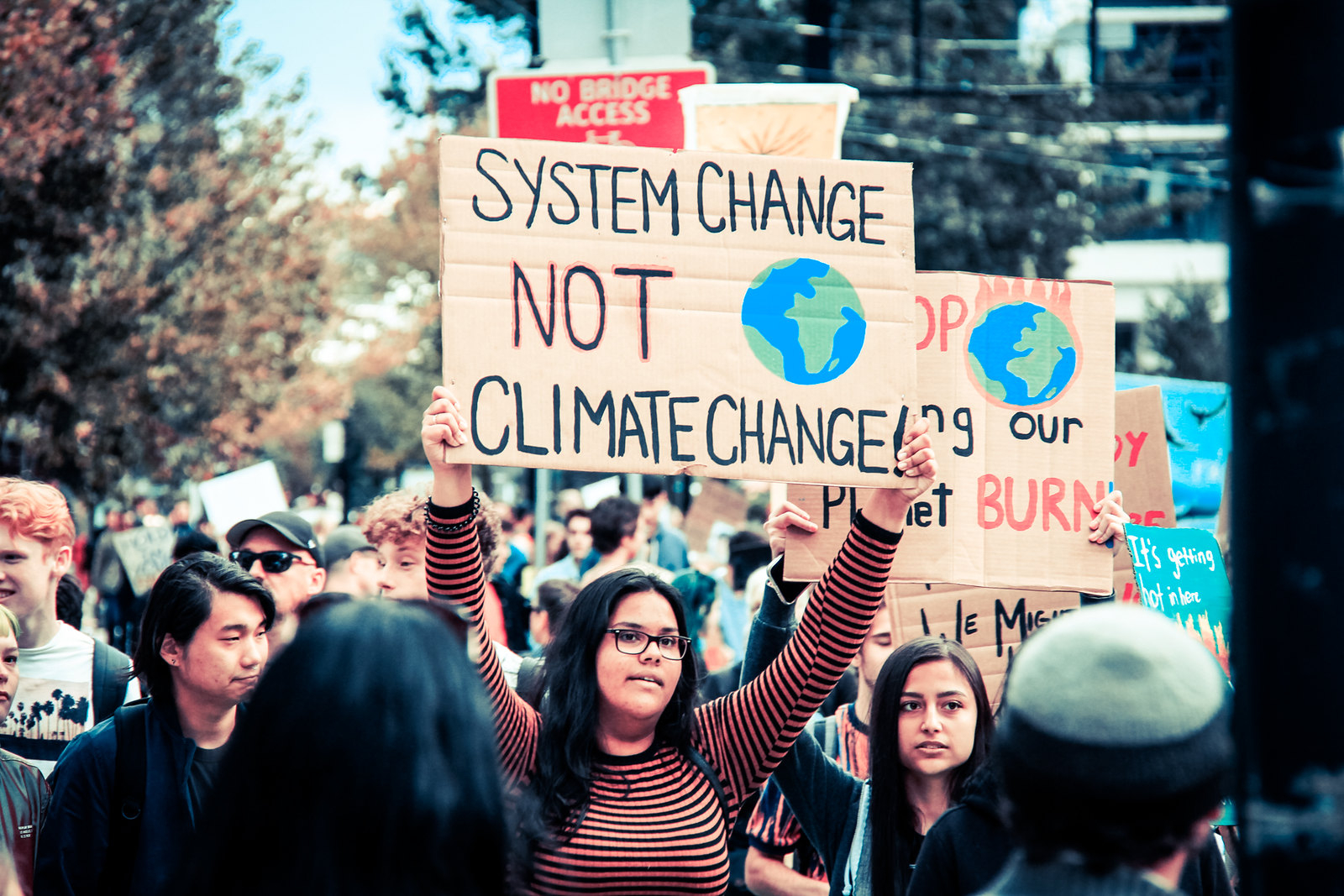 Climate strikers took to the streets in Vancouver on Sep. 27, 2019, as part of a global climate strike. Photo by Chris Yamikov via Flickr Commons
Previous story
Next story

Sustainabiliteens, a youth climate advocacy group in Vancouver, will lead a march alongside Swedish activist Greta Thunberg in an historic moment today.

16-year-old Thunberg has inspired youth around the world to strike from school on Fridays to protest government inaction on climate change in a movement she calls Fridays for Future.

This Friday for Future she will be in Vancouver joining organizers in a "post-election climate strike," showing that teens are keeping up the pressure on Trudeau's new minority government to take more action on climate change.

The climate strikers will gather at Vancouver Art Gallery in the downtown core at 11:00 a.m. and plan to begin their march at 11:30 a.m.

I reached the Pacific Ocean! pic.twitter.com/Qp1r2nARfV

This isn't the only climate action taking place in the city. Earlier this month, another group called Extinction Rebellion blocked Vancouver traffic for 12 hours on Burrard Street Bridge, a main route in and out of downtown. The group says they have more plans for traffic disruption.

Thumberg's visit comes shortly after she participated in a rally in Edmonton last week. Last month, she attended a global strike march in Montreal where 500,000 people marched. On the same day, 150,000 marched in Vancouver.

While in Montreal, she met with Prime Minister Justin Trudeau and afterwards told media “he’s obviously not doing enough" to act on climate change, but that she tells all politicians to do the same thing: “act on the science.”

Vancouver schools have tweeted at Thunberg asking her to visit their students, and not surprisingly, she's gotten more invitations than she can keep up with.

@GretaThunberg a million thanks for inspiring all these young climate change activists at False Creek Elementary. #fridaysforfuture. . https://t.co/ck0Y3OTtyp

In a desperate hope to get Thunberg to visit Victoria on Vancouver Island, Olympian gold medalist Adam Kreek offered to paddle her across the water, the Times Colonist reported. He had heard she was avoiding taking a ferry due to fossil fuel emissions.

She tweeted on Tuesday that she was unaware of any invitation from Victoria and had "definitely not declined it" because of emissions from public transportation.

"I try to visit as many places as I can, but there’s unfortunately not enough time to visit everywhere," she wrote.

PS. I don’t know anything about an invitation to Victoria, and I have definitely not declined it because of “emissions” from the public transport ferry. Just so you know:)
I try to visit as many places as I can, but there’s unfortunately not enough time to visit everywhere.

Some critics have pointed out that the public and the media have paid far more attention to Thunberg than other youth activists who have been sounding the alarm on climate change for a long time.

"She is fearless, earnest, passionate about the planet and determined," wrote Chika Unigwe for The Guardian. "But so are her peers."

"Born in a wealthy country, to parents who can afford to accommodate their daughter’s convictions, and in a culture where children are encouraged to speak up, Thunberg has intersecting privileges," Unigwe continued. "She is aware of this and regularly mentions her fellow youth activists in her speeches, to remind journalists that there are others working alongside her."

Perhaps most famously in Canada is Autumn Peltier from Wikwemikong First Nation, who is a long-time water protector who has spoken in the UN and to the prime minister. Xiuhtezcatl Martinez from Mexico, of Mashika descent, gave his first speech at 6 years old and founded an international environmental group called Earth Guardians. And Ta'Kaiya Blaney from Sliammon First Nation began writing her first protest song (against the Northern Gateway pipeline) at eight years old, and has spoken and sang at the UN, Idle No More events, and Occupy Wall Street.