In Saskatchewan, students learn about climate change through an oil and gas filter: report 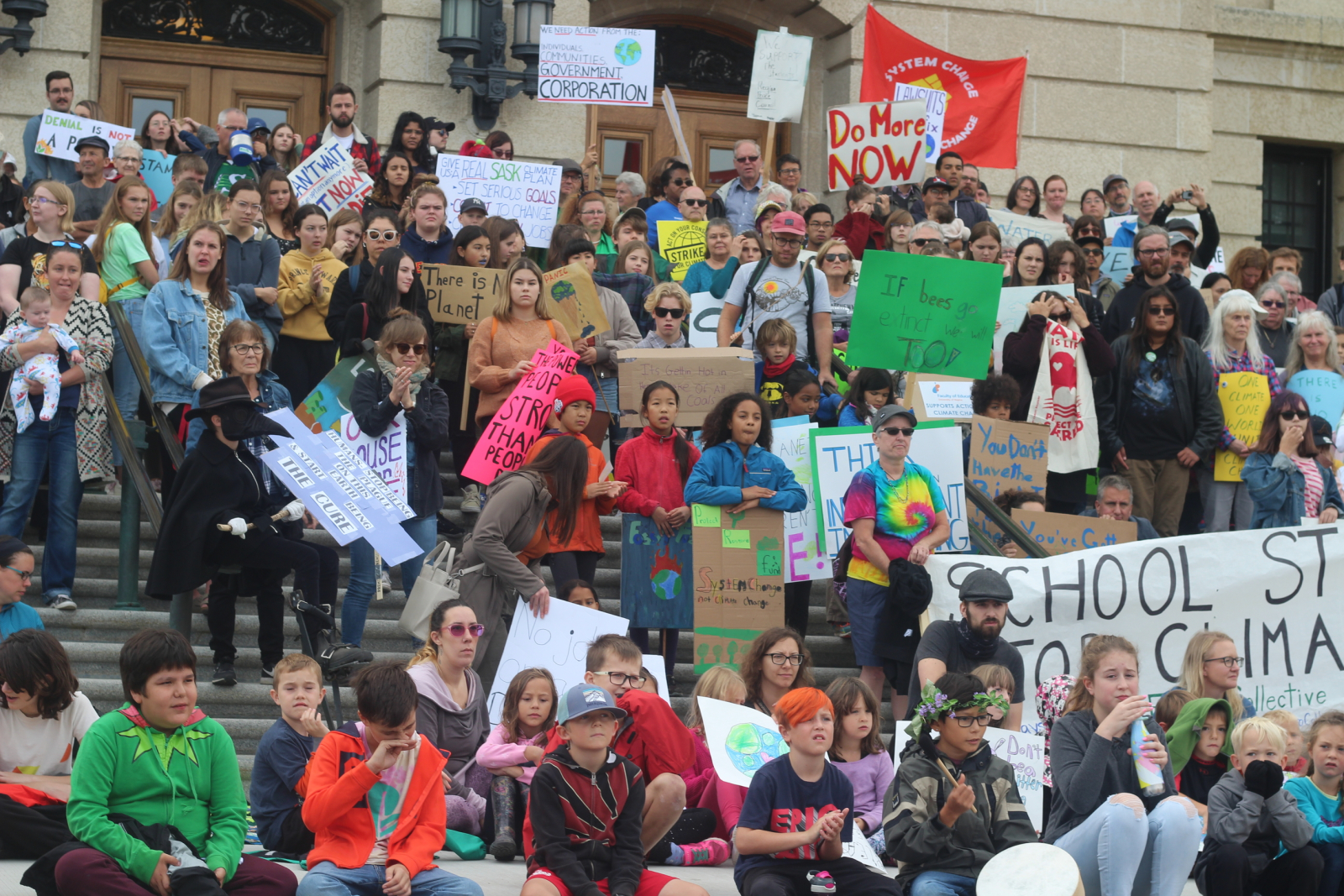 Public education in Saskatchewan has become a key tool in securing the 'hegemony' of the oil and gas industry, a new study has found. Regina Student Climate Strike on Sept. 20, 2019. Photo by Jeremy Davis / Flickr
Previous story
Next story

For Saskatchewan's oil and gas industry, the next stop is schools.

Public education in Saskatchewan has become a key tool in securing the "hegemony" of the oil and gas industry and "obstructing" the transition to a low-carbon economy, a study has found.

The September 2019 report titled “Petro-pedagogy: fossil fuel interests and the obstruction of climate justice in public education” was written by Emily Eaton, a University of Regina geography and environmental studies professor, and Nick Day, a public school teacher in Regina.

The research was supported by the Social Science and Humanities Research Council of Canada (SSHRC) as part of the Corporate Mapping Project, jointly led by the University of Victoria, the Canadian Centre for Policy Alternatives and the Parkland Institute with the aim of "investigating the power of the fossil fuel industry."

The report explores how public education in Saskatchewan has restricted "the imagination of possible climate solutions to individual acts of conservation that fail to challenge the structural growth of fossil fuel production and consumption."

Saskatchewan is Canada’s second-largest oil-and-gas-producing province. Many of its schools are in rural communities dependent on oil, gas and coal industries that contributed 14.5 per cent of the provincial GDP in 2016.

Eaton and Day interviewed teachers, out-of-classroom educational workers and third-party organizations engaged with public education in this landscape to understand how teaching practices and resources were working "to centre, legitimize and entrench a set of beliefs relating to climate change, energy and environmentalism that align with the interests and discourses of oil-industry actors."

What they found was a troubling influence of oil and gas in climate education across the oil-producing province.

Education non-profits funded by the oil and gas industry were found to be promoting fossil fuel interests and perspectives as "legitimate and necessary to learning about environmental issues," the report says. Any learning about the environment that didn’t consider the interests of the industry was considered "unbalanced and biased."

This kind of learning exists despite the fact that just 20 fossil fuel companies can be directly linked to more than one-third of all greenhouse gas emissions produced since 1965.

"Gone are the days when fossil fuel companies have had the strategy of outright climate change denialism," Eaton said in an interview with National Observer. "They're taking a more subtle approach now. And that includes, for example, insisting that any teaching about climate change and greenhouse gas emissions or energy resources must also include the perspective of industry... They also make the claim to students that modern life isn't possible without oil.

According to University of Regina researchers, the influence of oil and gas has instilled in Saskatchewan's education system a troubling worldview that doesn't acknowledge the urgency of the climate emergency.

"They're really obstructing the kind of scale of actions that we would need in order to confront the climate crisis that we're in right now."

‘You can never tell the whole narrative’

According to the report, the influence of oil and gas has instilled in Saskatchewan's education system a troubling worldview that can manifest in the classroom in several ways.

First, students are told to reflect on all the ways in which fossil fuels permeate their lives. This is easy in a place like Saskatchewan, where most, if not all, students will have one or two parents in the oil industry or its affiliates.

For example, SaskEnergy has an online learning centre, often employed by public schools, that suggests students interview older family members to learn how home heating has changed in the past century.

In another teaching resource developed by the Regina Catholic School Board and IPAC CO2 — a research project aimed at establishing international standards for the capture and storage of carbon dioxide — students learn about the technological solution of carbon capture. The Powerpoint resource includes prompts for students to reflect on how they use fossil fuels by "using a computer, driving a car, heating homes, turning on lights."

Then, students are shown how both the government and industry are already committing to greener production processes and initiatives such as new technologies and reimagined industry “best practices.”

The clear implication is that, if consumers express their demands through enlightened purchasing decisions, fossil fuels can be both "the cause and the solution to environmental crises," Eaton said.

"Then, it's really for students to think... only about their individual acts."

The report provided an example: an organization called Inside Education provides schools with an array of resources on the technical aspects and ecological effects of getting energy resources out of the ground. The so-called “energy efficiency and stewardship action kit” included items meant for individualized climate action: a shower timer, LED light bulbs, an energy monitor for individual appliances, a pedometer, a mesh produce bag and a mini solar panel.

"Overwhelmingly, we noted that organizations promoted individuals as consumers of resources, making active and voluntary choices in their personal and school lives” the report says. “Lessons on global climate change and the environmental impacts of energy production were rarely followed by a focus on collective action or policies meant to curb the production of fossil fuels."

One Saskatoon-based teacher, who wished to speak anonymously for fear of retribution, told National Observer that the classroom narrative around climate change had been subverted by industry "in subtle and very obvious ways."

"There's a threshold of conversations you can have," he said. "You can never tell the whole narrative. You can talk about the economic benefits, never the negative impacts."

This teacher explained that the industry had painted "a really friendly picture" of fossil fuels that had to be employed in lesson plans. If it wasn't, there would be complaints and backlash from both the school board and, most importantly, parents who work in the industry.

Often, such lessons can quickly become polarized, he said, as students come with their own narratives: a lot of students have ancestry or strong connections built of oil and gas.

Another way in which oil and gas propagandizes for fossil fuel is by sending its representatives directly into classrooms.

According to the report, at one particular school, an employee of a Calgary-based oil and gas company made a presentation to grades 5 and 6 students about how fossil fuels are formed, accessed and extracted. Afterward, the students planted trees in the schoolyard as part of an “outdoor classroom”’ project funded by the oil company.

Part of the problem, according to Eaton, is that while the Saskatchewan public education curriculum now includes climate change as a lesson, there are, thanks to government austerity, few opportunities for teachers’ professional development.

"The oil and gas industry has tried to fill that space as well," Eaton said in an interview. And they have done it, she said, in a way that is skewed toward one particular narrative, which obstructs progress by not mentioning climate change at all and hiding its absence behind talk about less impactful or non-climate-related environmental initiatives.

In 2013, Inside Education hosted a three-day environmental education program for 11 Saskatchewan public school teachers. The program was funded by the Canadian Association of Petroleum Producers and the oil and gas companies Cenovus, Apache and Penn West. It focused on issues of local environmental importance including wildlife, ranching, watersheds, native prairie conservation and outdoor education — issues that were delivered as balanced and that included the perspectives of different stakeholders.

"Only one workshop in the three-day long agenda was devoted to the perspective of the oil industry and the topic of climate change was not broached specifically, although there was a workshop on wind energy," the report notes.

In this way, climate education in the province has been forced to find a balanced narrative, so much so that the oil and gas industry has become "natural partners and stakeholders in curriculum renewal and school content," Eaton said.

An educator who piloted the new Grade 12 Earth-science curriculum told Eaton that industry representatives attended the meetings where teachers discussed and refined the curriculum before it was formally adopted.

"According to this educator, the industry representatives were circulating resources in the hopes that teachers would incorporate lessons pertaining to their industries," the report says.

This is inherently problematic because it misses big aspects of the climate crisis conversation Eaton believes students need to be taught, such as the history of climate change denialism and the role of corporations in promoting their interests and how to identify them.

"We would like to see the development of more independent curriculum materials that are about climate change for both the natural and social sciences and that encourage student engagement in responses to the scale and the scope of the problem ahead of us," Eaton said.

"You're framing young minds to think in a certain way that's going to influence their decisions in the future," she added. "It matters what we tell them about oil and gas today, if we're going to save the world from climate change tomorrow."

All governments use schools

All governments use schools to instil their ideology, philosophy and political agenda into students' open minds: they approve the curriculum. Traditionally, history has been used to develop national pride; religion to develop respectful and submissive behaviour; sex education to control population. Now climate change is used to help the petroleum industry.
It is the responsibility of educators to provide a wide range of facts to their students in oder to balance their government's biases (without losing their job!)

"In this way, climate

"In this way, climate education in the province has been forced to find a balanced narrative, so much so that the oil and gas industry has become "natural partners and stakeholders in curriculum renewal and school content," Eaton said. "
A balanced narrative is not, in my view, one that provides equal parts truth and lies, that ignores the harms and focuses on deep history, while promoting the current comforts and not mentioning science.

They should come study it

They should come study it here in Alberta. They’d find the exact same thing. And now with Kenney at the helm wanting to rewrite curriculums, well, Polarization is only going to be more extreme.