Did memes affect the 2019 federal election? 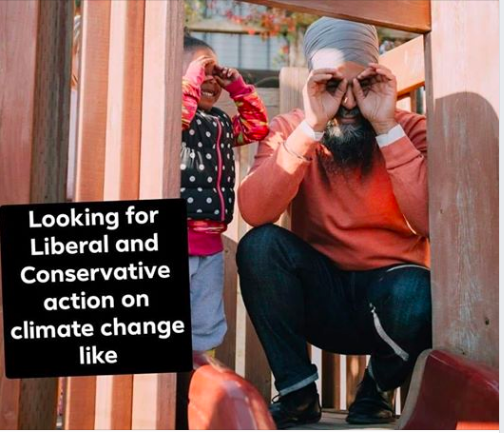 In the run-up to the 2019 federal election, a batch of politics-focused social media pages cranked out memes aimed at changing voters’ minds.

But despite that investment of money and effort, it’s not clear how significant an effect the third-party meme pages had on the actual outcome of the election, experts told National Observer.

“Is this going to swing elections? Probably not,” Fenwick McKelvey, an associate professor at Concordia University who studied political memes, told National Observer ahead of the Oct. 21 vote. “These are all open questions that we’re going to work on.”

Memes aren’t a new phenomenon, and neither is political campaigning by third-party groups that aren’t formally connected to a party or candidate.

But the idea of blending the two rose to prominence in 2018 after the Ontario provincial election. Ahead of that vote, former political staffer Jeff Ballingall started a popular Facebook page called Ontario Proud, which used memes ⁠to skewer then-premier Kathleen Wynne (Ballingall has said he was inspired by a similar page based in Alberta).

When Wynne and the Liberals lost the election to Doug Ford and the Progressive Conservatives, Ballingall said he thought Ontario Proud “helped bring that change,” citing social media engagement that topped that of many mainstream media outlets.

In a phone interview with National Observer, Ballingall said he believes Canada Proud's meme campaign was effective during the federal election as well. The group was far outspent by unions, which may have played into the results of the election, he added, but Canada Proud’s content still reached millions of people in the final days before the vote.

“We have to improve, but we’re proud of our impact,” Ballingall said. “Trudeau still lost the popular vote.”

Researchers' understanding of the impact of social media campaigning isn't absolute. This election was the first where scientists and journalists could access the Facebook ad library, providing a new window into online campaigning. But social media companies also aren't very transparent about how their algorithms work, which means key parts of platforms may change without notice and require fresh understanding, McKelvey said.

“This could be ineffective and still ultimately not be in the spirit of free and fair elections," said Fenwick McKelvey, an associate professor at Concordia University who studied political memes during the federal vote.

"These systems are evolving as fast as we can study them," he said. “I don’t think there’s ever going to be a point where we’ve figured it out.”

Key pieces of the overall picture are also missing — multiple factors usually drive someone to vote for a specific candidate, or to become partisan. And someone who sees or engages with a Facebook ad isn't necessarily convinced by it, McKelvey said.

"Just because you see something doesn’t mean you change your behaviour," he said.

'They didn’t seem as influential as I expected'

It’s not clear whether Ontario Proud actually affected the 2018 provincial election, or how that manifested in the federal vote. At this point, there isn’t a lot of data to back up either concept, according to Elizabeth Dubois, an assistant professor at the University of Ottawa who studies political uses of digital media.

Right-wing groups have tended to be the most popular online, said McKelvey, who studied political memes during the election along with a group of students at the Algorithmic Media Observatory. Their research isn't omniscient, as memes are often circulated in private groups, and it's possible there were relevant pages or groups they weren't aware of.

However, very little of the meme-based campaigning by third parties was positive, the researchers found — the pro-Conservative groups tended to promote content that portrayed Trudeau negatively as opposed to talking up Conservative Leader Andrew Scheer, and vice versa.

NDP Leader Jagmeet Singh was the only candidate to inspire a significant number of positive memes, McKelvey said. Those memes also tended to be the highest quality, using modern formats and capturing more complex ideas, like arguments against strategic voting.

McKelvey said he had thought the right-wing groups might drive more of the online conversation about the election, as their followings were often larger. But the researchers didn't find that talking points from conservative memes inspired their own news coverage or went viral beyond partisan circles, as TikTok videos made by Singh did.

"They didn’t seem as influential as I expected," McKelvey said.

In some ways, the meme campaign reflected the mainstream one: both the Liberals and Conservatives campaigned negatively against each other, while Singh experienced a last-minute surge in popularity that was reflected in positive memes about him. But Trudeau won a minority victory in the election despite being largely unpopular online, indicating that the online conversation wasn’t reflective of how voters felt as a whole, McKelvey said.

‘These are political actors with specific motives’

The notion that any of these groups were capable of swinging an election was always a bit questionable, McKelvey said. Campaigning tends to affect voting by just a few percentage points, he added, and other factors like get-out-the-vote efforts are also an important part of understanding what happens at the ballot box.

“A lot of these claims that ‘we’re so popular’ are using social media analytics to infer something we don’t know,” he said. “It’s not clear (social media engagement) translates into being popular and unpopular.”

It’s also hard to trust social media engagement metrics, which aren’t always transparent and can easily be manipulated. Facebook, for example, was recently sued by advertisers who said the platform overinflated analytics that purported to show how well video performed on the site.

Advocacy organizations also have an incentive to frame their work as successful to keep driving donations, Dubois said.

“Many of these groups have been started by political staffers and campaigners, people who understand that they need to get a message out to media at a specific time so that it can be in that day’s news cycle,” Dubois said. “These are political actors with specific motives.”

Ballingall said he’s not concerned about the veracity of social media analytics, because his numbers still top those of traditional campaigns. Canada Proud has also amassed a “massive” set of data about its supporters that can be used in the future, he added.

“We still have better numbers than anyone.”

“This could be ineffective and still ultimately not be in the spirit of free and fair elections.”

Whether social media campaigns have a serious effect on the ballot box may still be in question, but they have the potential to sway the political conversation, according to University of Calgary political scientist Melanee Thomas, who is also an Ekin Fellow at the McGill Institute for the Study of Canada.

One example, she said, is right-wing meme pages’ amplification of separatist rhetoric in Alberta. Even though it’s fairly normal for nearly every riding in Alberta to have a Conservative MP, the groups have been using the 2019 election results as proof of separatist anger ⁠— rhetoric that is also being used by Alberta Premier Jason Kenney.

“I don’t think any of this is good for democracy,” Thomas said.

Though there is a high level of frustration in Alberta right now, tied to the decline of the province’s oil and gas sector, political third-party groups that produce memes often have rich and/or corporate backers, Thomas noted.

Those groups have used that money to construct narratives that tie Alberta’s identity to oil and gas, which stokes fear and anger towards anything that’s framed as a threat to one or the other, Thomas added.

“The elites know what they’re doing, and I think they think they’re entitled to the levers of power,” she said.

“I have moral issues with how a lot of this (is) playing out.”