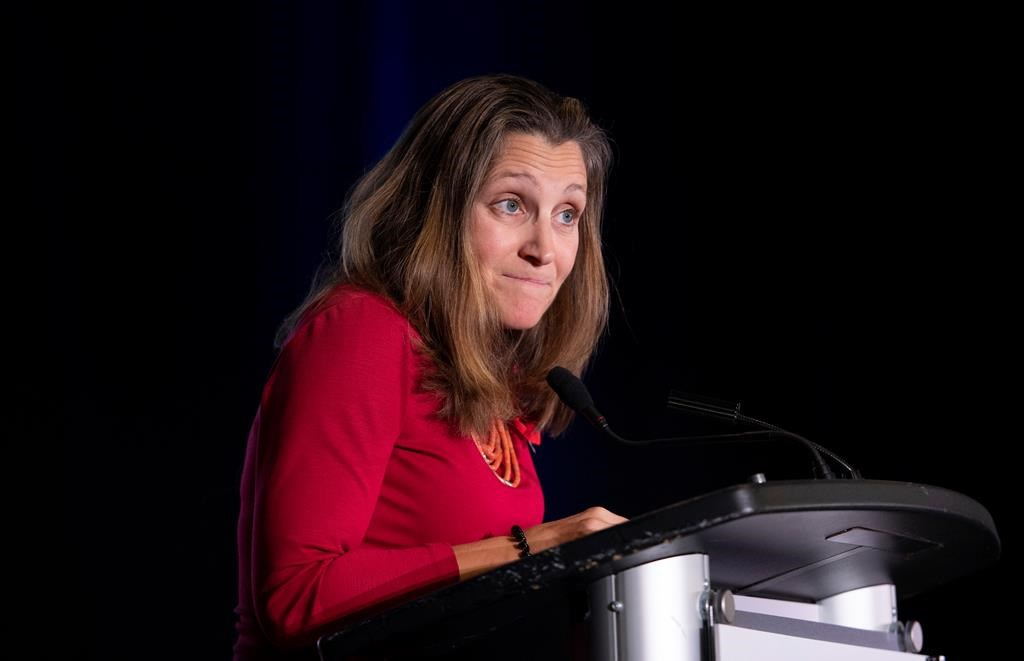 Minister of Foreign Affairs Chrystia Freeland delivers an address at the Triennial Congress of Ukrainian Canadians in Ottawa, on Friday, Nov. 1, 2019. Photo by The Canadian Press/Justin Tang
Previous story
Next story

Foreign Affairs Minister Chrystia Freeland is touting the country's Ukrainian community that spans provinces such as Alberta and Saskatchewan, as well as the rest of Canada, as a great unifier in post-election Canada.

She also pointed out Friday that she is Alberta-born, even though she now represents a downtown Toronto riding.

Freeland was addressing the opening of a three-day policy convention hosted by the Ukrainian Canadian Congress.

Freeland is one of the 1.3 million Canadians of Ukrainian descent, which represents one of the country's most influential diaspora communities.

Coming out of a federal election that has divided the country, Freeland suggested that Ukrainian-Canadians not bound by political affiliation can serve as a unifying example for a country that might feel divided.

The Liberals won a minority government, but were shut out by the Conservatives in Alberta and Saskatchewan, which is forcing Prime Minister Justin Trudeau to somehow ensure regional representation when he unveils his cabinet on Nov. 20.

"I represent University-Rosedale, but I am originally a proud Albertan," Freeland said off the top of her breakfast speech.

"We've just been through an election campaign. And elections campaigns inevitably and quite rightly are about drawing contrasts," she added.

"But after elections, it is also important for the people who have the privilege of being chosen by Canadians to represent them in Parliament, it is then important for us to come together, and to recognize that collectively we have a responsibility to represent all Canadians, and to govern for the whole country."

Freeland said she was inspired to see a roomful of Ukrainian Canadians representing all regions of the country.

She said the community "brings together Ukrainians from Ontario, from Quebec, from Alberta, from Saskatchewan and from Manitoba.

"I don't want to forget anybody else, of course from Atlantic Canada, from B.C. We're a community that really spans that regional divide in a way that is very powerful."

This report by The Canadian Press was first published Nov. 1, 2019.

Trudeau turns to political veterans on how to form government