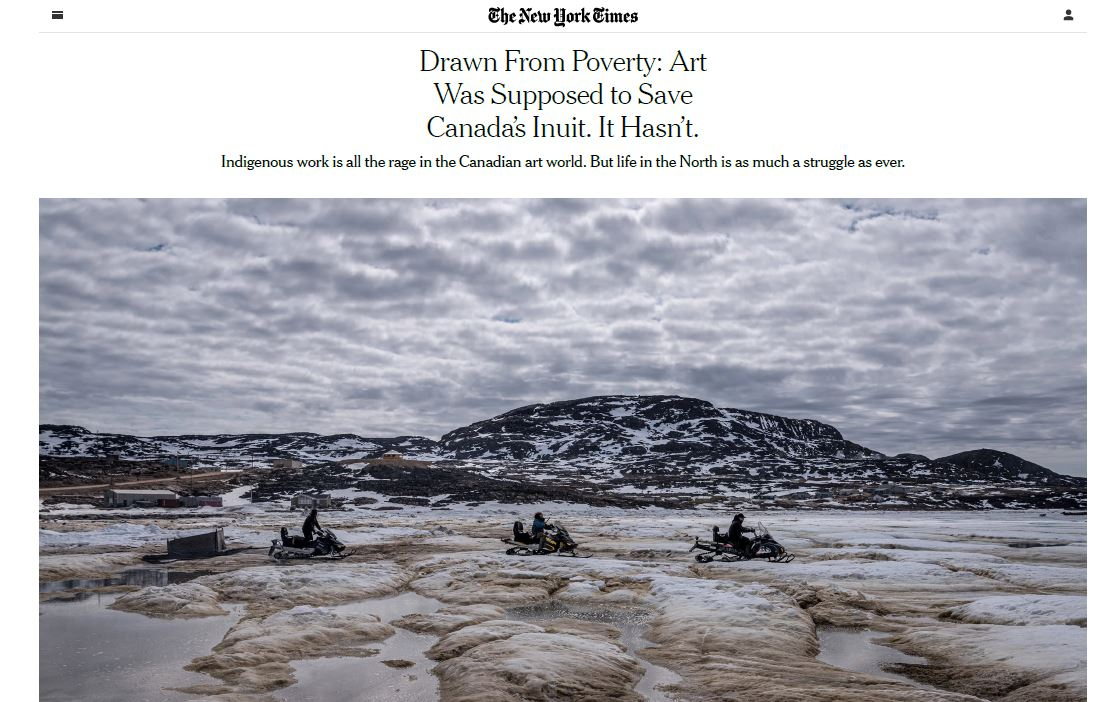 It’s not the first time Indigenous people have been burned by the media.

Most recently, it was an article about Inuit in Cape Dorset, Nunavut, published in the New York Times, entitled “Drawn from Poverty: Art Was Supposed to Save Canada’s Inuit. It Hasn’t.”

Now, the Native American Journalists Association (NAJA) has called on the Times to do an audit on how the story went to print. Francine Compton from the association said that they’ve set a meeting for Nov. 11, and the Times’ communications director confirmed this to National Observer.

In a statement, NAJA cites a journalist’s duty to avoid harming people, and said one “must be held accountable." NAJA calls out the Times for having “seemingly ignored its free Indigenous coverage training” that the association gave to their newsroom in May.

A complete lack of nuance and complexity without the faintest mention of colonialism. Teach this twitter thread and the garbage it’s attached to in J-School in a class called, “Without Context - White Woman Adventures In The North.” https://t.co/4wYHiOXjSq

“We’re putting the New York Times on the stand, in a sense, because that training was done,” said Compton. She’s from Sandy Bay Ojibway First Nation and is on NAJA’s board of directors.

She said she dreaded reading the article — but felt she had to after seeing responses online and being tasked to draft NAJA’s response.

“I had to read the full article so I knew exactly what everyone was really outraged about,” she said. “And not just outraged. It was actually real hurt and pain it caused … not only to the sources, but all Inuit.”

The association also calls for the Times to issue an apology and hire more Indigenous journalists who know about the long history media has of stereotyping Indigenous people.

Ari Isaacman Bevacqua, director of communications at the Times, told National Observer no one was available for an interview and Porter is reporting in the Bahamas.

In an email statement, she said they “welcome” NAJA’s offer to meet.

“The issues that we recount came up repeatedly in the lives of the people we interviewed and profiled. They were frequently raised by members of the Cape Dorset community as significant, persistent challenges they wanted solved," she said. She then said the article also includes positive aspects about Cape Dorset.

“We look forward to continuing the conversation on these important topics with NAJA.”

Article doesn't use the words colonialism or trauma

Compton, who is also an executive producer at APTN, says journalists can report on these types of issues — but they need to practice trauma-informed journalism, contextualizing issues such as addiction within colonialism and institutionalized racism.

The article does not use the words colonialism or trauma. Yet, the article makes at least seven references to alcohol, drinking, bingeing or being drunk. It uses the word poverty five times (including the headline), without delving into how the government has set restrictions on hunters’ ability to sell game meat — which makes it hard for them to make a living — or the failings of the Nutrition North program and other economic factors.

Some other important terms are missing, Compton says: genocide, Truth and Reconciliation Commission, or missing and murdered Indigenous women and girls inquiry.

Taken together, some of the article’s descriptions can sound dystopian. Porter describes Cape Dorset as a place “plagued by poverty, alcoholism and domestic abuse” where “brutality is never far away.” She describes people who were “once the epitome of self-reliance” but are now living lives “defined” by poverty. In the headline, she suggests Inuit need to be saved.

That’s not the home or people that Lisa Koperqualuk knows.

Koperqualuk, who lives in Iqaluit and advocates for Inuit rights, said Porter used sweeping generalizations in the article about poverty that didn’t make sense when the focus was meant to be on the young Inuit artist, Oosoolie Saila.

“It was about the art of this young woman. But the title of the article was about, well, that art was supposed to help ‘save’ the Inuit and that hasn’t happened… I just couldn’t agree with that,” she said.

Since a friend shared the article with her, Koperqualuk said she’s really concerned about how some people may read it.

“Not everyone knows who we are,” she said. “They might take that article at face value and think it’s true.”

Porter did mention the history of the government’s “systematic attempts to erase Indigenous cultures,” and how the government brought Inuit into towns, displacing them from communities and committing dog slaughters.

Alethea Arnaquq-Baril, a documentary filmmaker who made the film Angry Inuk defending Inuit seal-hunting, expressed her anger and disappointment regarding the article, since she had assisted Porter in her reporting.

“I am gutted by how bad this article is, and that I ever welcomed the author into my house,” she said. “She arrived in the North having no idea what to even write about, and I gave her a bazillion ideas, and instead she chose to reinforce stereotypes.”

Indeed, Compton says NAJA created a stereotype bingo card made up of common tropes about Indigenous people used by the media, such as “vanishing culture,” “alcohol” and “sexual assault.” She says she crossed out boxes as she read Porter’s article.

She said an apology is in order, and that NAJA is open to doing more training with them.

She said that for her, the “authoritative tone” of the article was one of the things that bothered her most, which she said reads like an outsider coming in and saying, “I’m going to tell you what life is like for Indigenous people in Canada.”

Porter doesn’t appear to have responded to the negative criticism she’s received online.

Compton thinks Porter was capable, with the time she was allotted, of doing the work necessary to include nuance and complexity. In fact, Porter visited Cape Dorset three times.

“It almost felt like the illusion of time spent was written into the piece,” she said, “but there really wasn’t any meat in the piece.”

Inuit combine nine different scripts for writing Inuktitut into one

Media staff seem to be in a

I have spent 75 years of my

I have spent 75 years of my life reading, reading, reading. It is only relatively recently I have been gifted with the wide variety of reading materials coming out of the American indigenous traditions and mind set.

I have to be honest and say that after decades immersed in western, white, culture and literature it is often a struggle for me to fully appreciate where indigenous writers come from or to understand the references, the cultural echos that resonate in their work. It is doubly dispiriting to recognize that what these indigenous writers are doing is "translating" their mental processes, their cultural world view into the language and the psychic landscape of their colonial oppressors.

This is, perhaps, the great impoverishment that is happening to humanity as cultures and languages are extinguished globally. Those of us in the dominent societies are fools to scoff at these losses. Every loss, every extinction diminishes us, destroys the complexity of human evolution, of the varied experiences of humans on this earth. It is, whether we know it or not, spurring the development of "artificial intelligence".

As of this wrting, my reading suggests that artifical intelligence is an oxymoron. AI can, superficially, replicate human speech and human communication modes. However, the further you push its apparant capabilities, the more AI degenerates into gibberish word salads. AI intelligence is a "stripped down" simulacrum of human communication - lacking all the millenia of human experience, emotion, and context.

How long will it take, how humongous a digital machine will it take to replicate humanity? Meanwhile, we carelessly consign to oblivion the lives and minds of whole legions of humans.

The NY Times, like so much of "western media" is incapable of translating the "other" for its dominant audience. If it wants to do justice to its "cultural explorations" is should be savvy enough to use, and to quote accurately, the local, native, narrative.

It is this systemic failure, or refusal, of the dominent european colonial mind to learn and understand the humanity of the world's "other" humans, that has led us into the cul-de-sac of the current understanding of globalization. What the movers and shakers of the world want is the homogeneity of humanity. It would be so much more cost effective! And terminally stagnant!

It has suddenly occured to me

It has suddenly occured to me what an Inuit, or a San writer would have to say about the malevolent forces at work in the Colonial societies: drug addiction, alcholism, greed and corruption, mental and emotional abberations requiring billions spent on mind and mood altering drugs...systemic injustice, wrongful incarceration, predatory impoverishment?

Perhaps the NY Times needs to commission a variety of "other" humans to parachute into North America and to report on the state of our society, from their perspective.

There is nothing quite like the shock of learning how "others" see us.

You mean they might not actually be "jealous of our freedom"?

In other words the stories

In other words the stories have already been written by the training... It is clearly a form of censorship. Regardless of some route causes, the problems outlined are real and truthful. The rules in the training force journalists to focus on looking backward and blaming rather than forward looking fixing. I think it is sad.

I don't think this 'training'

I don't think this 'training' is a form of censorship. If an author doesn't agree with the conclusions embedded in the the 'training', they can always write about that, but since those conclusions have a lot of evidentiary history behind them, they'd better be ready with really solid rebuttals or be prepared to be trashed.
The 'training' is not about censorship, but is instead a way of pushing journalists into contextualizing the issues at a deeper level, rather than just skimming through stereotypes to produce lazy journalism, then floating off to the next assignment.
Finally, without a hard look at the past which has generated these 'issues', one cannot come to terms with this past, and create solutions and a new future that doesn't simply repeat the past yet again.
It looks like people in 'Indian Country' (had to laugh at the cliched trope in the Bingo Cards own descriptive text) have had enough and are pushing back. Can't say as I blame them.

What are you doing, National

What are you doing, National Observer? Is this journalism or proselytizing? After reading Ms. Wood’s piece I wondered how badly the New York Times had done. For some reason, despite including a number of links throughout the article to a perspective consistent with the article’s argument, there was no link to the NYT article itself. What are you saying, “NYT: bad; National Observer: woke”?
Come on. Give your readership some credit. Unless the allegation is that Porter made up what she reported on, I assume the article contains truthful observations. It does provide some historical and political context that should be familiar and concerning to any informed Canadian. The article would, no doubt, be embarrassing to some residents of Cape Dorset, but the outrage being expressed by NAJA and, frankly, by this National Observer piece, is misplaced and woefully biased. “Trauma porn”? Hardly fair. It is not a disservice to citizens to portray present reality with context. It should contribute to conversation but not to shooting the messenger.