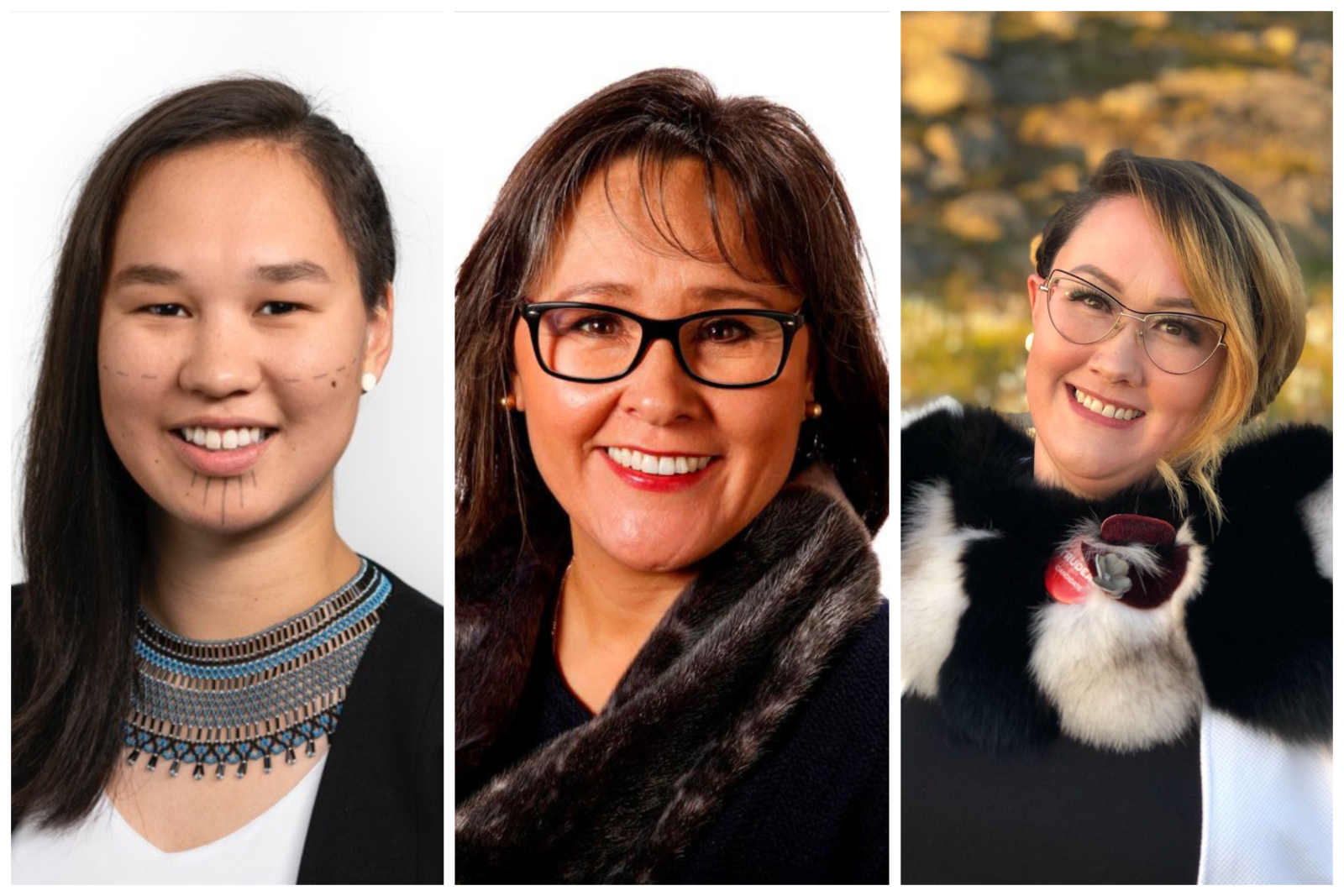 Nunavut is Canada’s largest riding and covers about one fifth of the country, but the territory only has one seat in Parliament.

On election day, three Inuk women were finishing a close race for that seat.

“Regardless of the outcome, an Inuk woman’s going to be sitting in that seat, which I think is very powerful,” said Mumilaaq Qaqqaq, the NDP candidate. She called National Observer as she was campaigning in Panniqtuuq (Pangnirtung), a community of just under 1,500 people on the far eastern corner of the territory.

Media in Nunavut has described the race between Qaqqaq and her opponents, Liberal candidate Megan Pizzo-Lyall and Conservative candidate Leona Aglukkaq, as too close to call. A member of Pizzo-Lyall’s team said there has been no polling in Nunavut, but on the ground it feels “very close,” and 338Canada, an electoral projections website, calls the race a “toss up.”

Since Nunavut became a riding in 1997 (and officially its own territory in 1999), it has been mostly led by Inuk women: Liberal Nancy Karetak-Lindell from 1997 to 2008, and Aglukkaq from 2008 to 2015, when she was unseated by Liberal Hunter Tootoo.

The 2016 census found 35,944 people live in Nunavut, with 85.5 per cent identifying as Indigenous, most of whom are Inuit. The average age is 27.7 years old, significantly younger than the national average of 41.06.

Aglukkaq, Pizzo-Lyall and Qaqqaq have agreed on some core issues during this election, such as increasing funding for housing in Nunavut and reviewing the Nutrition North program, a federally funded program to subsidize food and products brought by sealift to the North.

But Qaqqaq said years of Liberal and Conservative leadership haven’t addressed long-standing problems in Nunavut, and it’s time for a change. Meanwhile, Pizzo-Lyall is defending the Liberals’ record over the last four years, and Aglukkaq argues she has the necessary experience.

Justin Trudeau is the only leader who visited Nunavut during the campaign, though Jagmeet Singh had a Facebook Live conversation with Qaqqaq on Oct. 12. Andrew Scheer visited Nunavut for the first time in June.

As people head to the polls, it appears it could be anyone’s race in Nunavut.

Improving quality of life for Nunavummiut

She said she was working in suicide prevention with the health department of the Government of Nunavut when she experienced her own loss.

“I lost a good friend to suicide ... and kind of found myself wondering what on earth I’m doing,” she said. “It really just ate me up.”

She said she’s lost too many friends and family, and she wants to take measures to improve the quality of life for Nunavummiut (the people of Nunavut). She says medical professionals, RCMP and others in public service should have to go through more cultural training before working in the territory so that they understand the complexity and history behind some of the issues that Nunavummiut face. Cultural competency training is one of the calls to action made by the Truth and Reconciliation Commission, and the NDP has promised to implement all 94 of the calls to action.

Qaqqaq wants to address overcrowded housing and food insecurity, increase services for seniors and improve access to post-secondary education in the territory, so people don’t have to leave home and be alienated in order to receive care or education.

“[Suicide is] a very iffy topic to a lot of people,” she said. “But I’m not scared or hesitant to talk about it. We have the highest suicide rate in the country. And I’m getting tired of people not stopping and asking why, and how do we change that?”

She said the suffering people go through that can lead to suicide is connected to the history of colonialism. She said families have dealt with relocation of communities, the pass system, the impact of churches and dog slaughters.

“We’re still trying to heal from that,” she said. “It’s my dad that went to residential school and was moved to town. It’s not something that happened a hundred years ago.”

While addressing suicide is an important issue for Qaqqaq, she also says she wants people to know about positive things happening in Nunavut, such as Inuit-led businesses, artists who have a place on the international stage and how people are reclaiming traditional tattooing and hunting.

“(The Liberals) are going to encourage more positive programming, focusing on what we call celebration of life,” she said, such as elder-youth camps and teaching youth cultural skills.

She said the Liberals have committed $290 million over the next eight years to increase housing, though critics and the territory’s own premier have said that funding is not enough to address the housing shortage.

Aglukkaq was not available at press time to comment on her plans to address quality-of-life issues. On World Suicide Prevention Day on Sep. 10, she said beyond mental health services, addressing suicide required getting to root causes like “better housing, more job opportunities and a lower cost of living would help alleviate the stress.”

In another post on Oct. 18, she criticized Trudeau’s visit to Nunavut in August, where he confirmed the $290-million funding that the Liberals had already announced as part of their 2017 housing strategy. She said the government spent “time, money and carbon” to repeat the announcement.

“The Housing Corporation says it will take 60 years to address the housing crisis at the current funding levels,” she wrote. She has repeated affordable housing as a core mandate of hers, though without specific costing.

Candidates disagree on how to combat the climate crisis

Aglukkaq, who served as minister of environment under Stephen Harper, is against carbon pricing, which the Liberals implemented to deter pollution. On her campaign Facebook page, she said it is “punitive” for northern communities who rely on fossil fuels. Nunatsiaq News reported that Aglukkaq called carbon pricing a “shipping tax” at the Oct. 15 debate in Iqaluit, and Pizzo-Lyall stood up to say Aglukkaq’s representation of carbon pricing is false.

In fact, the federal government exempted aviation fuel from carbon pricing for Nunavut. The government also provides a relief fund for diesel-fired electricity.

Additionally, the Government of Nunavut has a carbon rebate program, under which it pays half the carbon pricing charge at the point of purchase.

“She’s completely wrong where she’s talking about carbon pricing,” Pizzo-Lyall told National Observer on the phone, adding that she hasn’t heard people bring up carbon pricing as a concern on the campaign trail.

“The Conservatives don’t have a plan to tackle climate change,” she added.

Aglukkaq was not available for an interview, but in September, Aglukkaq wrote, “People dismiss Conservative plans to scrap the carbon tax as us hating the environment. I'm Inuk. The North is my home and I love Nunavut. I don't hate the environment.”

As environment minister in 2015, Aglukkaq announced Canada’s goal to reduce greenhouse-gas emissions by 30 per cent below 2005 levels by 2030. The Liberals maintained this target after being elected later that year, though the NDP and the Green Party have said this goal is not ambitious enough.

While the Conservative platform doesn’t mention reliance on fossil fuels in the North, the Liberal, NDP and Green platforms all include promises to transition northern communities off of diesel. Melting sea ice due to climate change threatens northern communities and animals that those people rely on for food, such as polar bears, moose and seals.

All three candidates are focused on enhancing hunters’ and harvesters’ ability to access traditional foods. The food subsidy program Nutrition North was introduced in 2011, with the intention to decrease costs of supplies delivered from the South. But one study found that since the program launched, food insecurity has instead increased in Nunavut.

It’s still difficult to sell wild game in restaurants and stores in most of Canada, which means hunters can’t sell as much meat, and some people can’t access these traditional foods as easily.

NDP candidate Qaqqaq said she wants Inuit hunting to be recognized as being “just as nutritious” as food from the South.

The NDP platform includes a mandate to reform the Nutrition North program. Aglukkaq and Pizzo-Lyall each said they would review the program, though the Conservative platform makes no mention of food sovereignty, Nutrition North or Inuit people. The Liberal platform doesn’t mention Nutrition North specifically, but promises to work with Inuit to improve food security.

Pizzo-Lyall said the Harvesters Support Grant is one of the Liberals’ successful policies, which provides funding to help offset costs associated with traditional hunting. She also said other Liberal legislation, such as the Canada Child Benefit, has helped with overall affordability in Nunavut.

She said decreasing the age to access Old Age Security down to 65 years was especially significant, since the lifespan in Nunavut is lower than the rest of Canada. Harper’s Conservative government had raised the required age to 67 years old. According to a report in 2017, the estimated life expectancy for Inuit was 72.4 years, opposed to 82.9 years for non-Indigenous peoples.

“Those two years make a difference because the lifespan of Inuit in Nunavut is super low,” Pizzo-Lyall said.

Have the Liberals accomplished enough to keep their seat?

Pizzo-Lyall said she’s proud of what the Liberals have achieved for Indigenous Peoples in the last four years, in particular the Inuit-Crown Partnership Committee, a non-binding committee of ministers and leaders who have created strategies to address Inuit needs such as housing, child care and eliminating tuberculosis.

National Observer asked what she would say to Indigenous people who have lost their trust in Trudeau and the Liberal government due to a range of issues, including failure to lift all long-term boil-water advisories, Trudeau’s blackface scandal and the government having applied for a judicial review of a human rights ruling demanding the government compensate Indigenous children harmed by the on-reserve child-welfare system.

She emphasized that the Liberals have lifted over 80 water advisories and “we know what works, and we know how we’re going to move forward.”

Referring to Trudeau’s blackface and brownface incidents, Pizzo-Lyall said, “He said what he did was stupid and he is sorry ... I’ve known him through 2005, and I never once thought he was a racist man.”

As for the human rights ruling, she emphasized it was a stay, not an appeal, and repeated points made by Trudeau and other Liberal MPs and candidates — that they are in the middle of a campaign and don’t want to rush the settlement.

“We need to make sure Indigenous children impacted have the best opportunity to discuss things like compensation and reconciliation,” Pizzo-Lyall said.

“I understand the concerns that people have across the nation regarding Indigenous issues,” she said. “I’m Inuk myself and I’m sorry that the media can sometimes misconstrue some of the issues. My heart goes out to people who feel that distrust. It’s people like me, an Indigenous person, that wants to help them feel trust again in their government."

But 25-year-old Qaqqaq said the Liberals and the Conservatives have had the time to address long-standing issues such as food security, water advisories and housing.

“The Liberals and Conservatives have been holding Nunavut for just under forty years, and what’s changed?” she asked. “It’s time for something new and something fresh.”

Meanwhile, Aglukkaq has been using the hashtag #ExperienceThatDelivers, emphasizing her work as minister of health and minister of environment and that she’s listening to communities.

“I hear over an over that affordability, mental health, housing and infrastructure matter most," she wrote on Oct. 17. "That is what I'm committed to.”