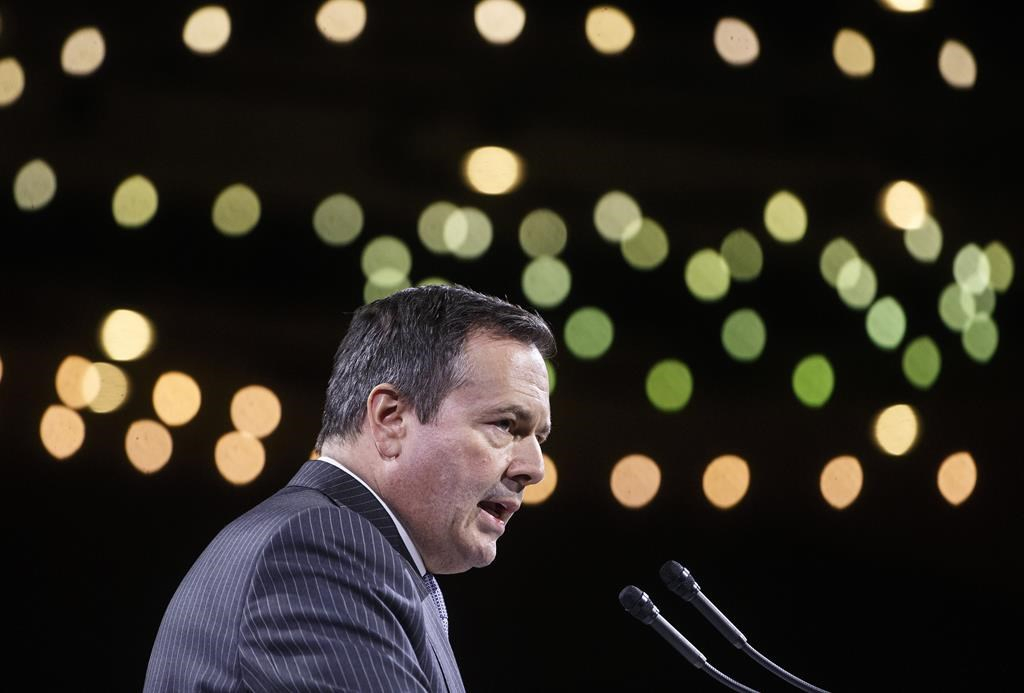 Alberta Premier Jason Kenney delivers his State of the Province address to the Edmonton Chamber of Commerce in Edmonton on Tuesday, October 29, 2019. File photo by The Canadian Press/Jason Franson
Previous story
Next story

Alberta Premier Jason Kenney says there's a "compelling case" to be made for his province to exit the half-century-old Canada Pension Plan — an idea sure to face increasing scrutiny over the coming months.

With growing frustrations in his province about its place in the federation, Kenney has revealed that a deeper analysis is on the way to consider Alberta's potential withdrawal from the national pension plan.

The move, if it goes forward, would pull Albertans' multibillion-dollar share from the $400-billion pool of assets that are handled by the investment manager, the Canada Pension Plan Investment Board.

The proposed departure, Kenney said, will be examined by a panel his government intends to create as a way to assess "fairness" for Alberta within the federation.

Talk of the CPP withdrawal follows a federal election result late last month that many say exemplified Prairie frustration toward the Liberal government in Ottawa. The federal Liberals were reduced to a minority mandate after failing to capture a single seat in Alberta or Saskatchewan.

There's also been momentum behind separatist sentiments in the two resource-dependent provinces, where their economies have struggled through a commodity downturn.

Much of the anger has been directed at Ottawa and other parts of Canada — which are accused of preventing the landlocked Prairie provinces from getting their natural resources to the coast for export.

Now, Kenney is ready to take a long look at ditching the CPP, which has been in place everywhere in Canada, except Quebec, since the mid-1960s. Quebec has been managing its own sister pension plan.

"I can certainly tell you that will be one of the issues studied by the panel that I will be appointing to consult with Albertans on fighting for a fair deal in Canada," the Alberta premier said in a recent video clip, which was posted last week on Facebook.

"I believe that a compelling case can be made for such a shift."

In his message, Kenney said he understands about $40 billion worth of Albertans' premiums are managed by the CPPIB.

He said the funds, if pulled from the CPPIB, would be transferred to the Alberta Investment Management Corporation, also known as AIMCo. The institutional investor, which includes the province's public-sector pension plans, already manages about $100 billion in assets for Alberta taxpayers, he said.

With Alberta home to Canada's youngest population, he added it's the biggest net contributor to the CPP.

"Let me underscore, our government has not made any decision in this respect — but it is certainly one of the ideas that people will be presenting to our panel on fairness within the federation," Kenney said.

The premier argued the extra funds would enable AIMCo to diversify further and potentially improve the returns over time. Kenney also noted that Quebec has responsibly managed its own pension plan outside of CPP for decades.

Bill Morneau, who is widely expected to stay in his role as finance minister once Prime Minister Justin Trudeau forms his new cabinet Nov. 20, was asked Thursday whether Alberta should be able to leave the plan.

"I think there will be more that we'll have to discuss after Nov. 20 and we're looking forward to having those discussions," Morneau said in Ottawa on his way to a post-election meeting of current and defeated Liberal MPs.

Kevin Milligan, a University of British Columbia economist, said Alberta's proposed exit from the CPP should be taken seriously given it's coming from the premier.

Any push by Alberta to abandon the CPP is a much more credible suggestion than the debate about equalization, given the pension plan is a joint federal-provincial project with exit provisions, while equalization is a federal program, Milligan said.

"I do wonder what the goal of this is," he said of Alberta's possible withdrawal from the CPP. "Alberta could certainly do this — it is in their rights to do so. But in doing so they would have to set up their own administration, set up their own benefits structures... and these things are not cost-free."

The Quebec pension plan comparison, he added, is difficult to make because trying to undo the CPP arrangement now — after decades — would be far more complicated than at the outset.

Milligan also said from the future of the pension plan's standpoint a threat by Alberta to leave the CPP is unlikely to cause considerable concerns in the rest of the country. Actuarial projections, he added, show the CPP is tens of billions of dollars ahead right now than where it should be.

"The idea that this would be a way to get people in the rest of Canada, to poke them in the eye — I'm not sure that's true in terms of the fact (the CPP) is in pretty good shape right now," he said.

Keith Ambachtsheer, a pension expert, said he sees no economic argument for Alberta to exit the CPP and that it would be purely a political decision.

"There's nothing in it for the Alberta taxpayer. So, it's pure spite," said Ambachtsheer, director emeritus of the University of Toronto's Rotman International Centre for Pension Management.

"I think it's important that people understand there's a difference between bluster and hard, economic analysis."

A spokesman for the independent CPPIB declined to comment about Alberta's exit proposal.

Kenney has already promised to hold a referendum on his province's participation in Canada's equalization program. It's a federal program designed to help poorer provincial governments provide public services that are reasonably comparable to those in other provinces.

Alberta, despite its economic difficulties, has continued to pay into the program while other provinces like Quebec — which has seen significant improvements — has kept on receiving billions through the program.

The complex equalization formula is based on a three-year moving average of economic performance, so a province's have- or have-not status can lag behind economy-altering events.

This report by The Canadian Press was first published Nov. 7, 2019.

— With a file from Joanna Smith

This guy NEEDS to be gone.

This guy NEEDS to be gone. Don't go messing with the only pension plan that most of of have in Alberta. I am not a millionnaire. I don't have a union job. I haven't had a raise in 8 years. Drop dead Kenney. That is all.