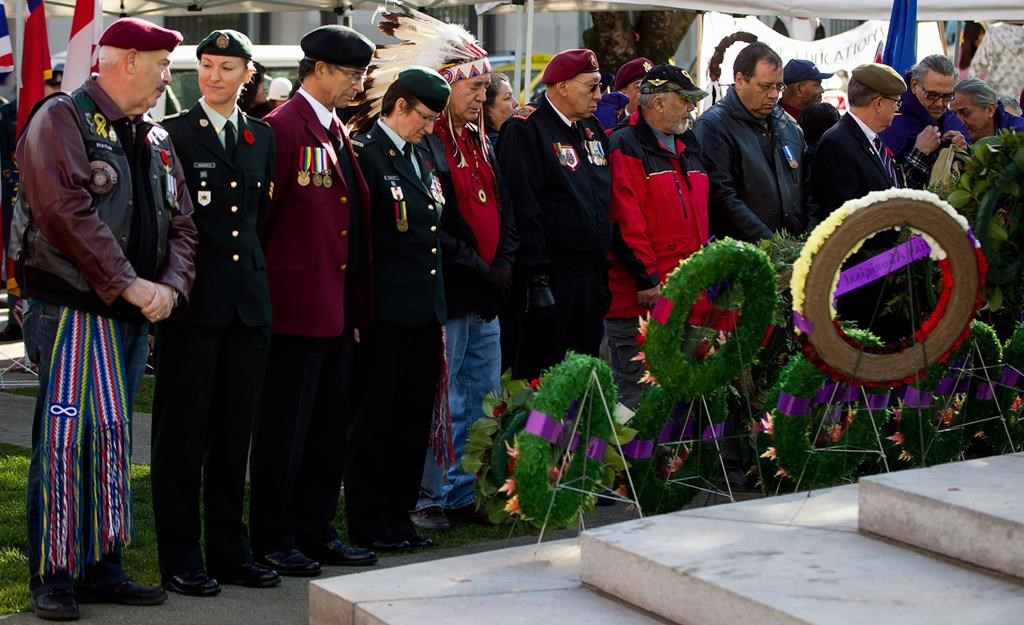 A fiddle played the sombre strains of the Last Post and Amazing Grace during a special ceremony Friday to remember the contributions of Canada's Metis people during the Second World War as well as the discrimination that greeted them upon their return home.

The ceremony followed a formal apology and a promise of compensation from the federal government in September that acknowledged Metis veterans were not allowed to receive the same benefits and reintegration support as other Canadians after the war.

The issue remained a sore point for the Metis community for decades, particularly after the government issued an apology and compensation to First Nations' veterans for similar discrimination in 2002.

Speaking to the small gathering of veterans, family members and supporters who gathered around the National Indigenous War Memorial for Friday's ceremony, David Chartrand of the Metis National Council thanked the Liberal government for the apology and compensation.

"But one of the things that I press upon is a lot of them (Metis veterans) have now passed on, they did not see this day of remembrance, of honour and respect that this country brought to them, which should have been done 75 years ago."

The Liberal government first indicated in March that it planned to make amends to Canada's Metis veterans when it set aside $30 million in the federal budget to provide compensation to Metis veterans treated unfairly, and to commemorate their contributions.

Two veterans — George Ricard and Guy Lafreniere, both 94 — braved sub-zero temperatures to attend the ceremony in Ottawa Friday with their families before they were presented with $20,000 cheques as part of the agreement between the government and Metis nation.

"He was never recognized," Jim Ricard said of his father, George, who enlisted as a 17-year-old and repaired Sunderland bombers in Ireland during the war before spending two years helping rebuild Dusseldorf, Germany. "I think it's fantastic that they finally did something."

Ricard and Lafreniere are the 12th and 13th veterans to have been compensated by the government, according to the Metis National Council.

The organization could not say how many Metis veterans are still alive and eligible for such payments. The families of veterans who have died within the last three years can also receive compensation.

About $20 million of the budget 2019 will go into a legacy fund to support several commemorative initiatives, including the expected building of a monument and the provision of bursaries or grants for Metis students.

Indigenous Services Minister Seamus O'Regan, who previously served as veterans affairs minister and attended Friday's ceremony, said while compensation "is nice, it really is about recognition — and an apology is a very sincere, most sincere form of recognition.

"It's an acknowledgment that recognition was not given when it should have been. But that it is given now with some shame, with a great deal of respect, and it is in that spirit that we are here today."

This report by The Canadian Press was first published on Nov. 8, 2019.

Only equal on the battlefield: Efforts underway to honour Indigenous veterans

It has taken far too long to

It has taken far too long to provide the recognition and compensation due to Canada's Indigenous/Metis veterans. Sometimes the lapse of 70 years is more insult than beneficial. Had it not been part and parcel with the ongoing, crippling government discrimination against the First Nations and Metis peoples, one might almost be deceived into thinking this shockingly belated apology was sincere.

The one thing we can be sure of is that our shuffling, penny pinching national governments, throughout the decades, evaded their responsibilites in all aspects of righteous treatment of these veterans and their families. Now, and only now, that so few of them survive does our society and its government think they can afford to provide the honours and the compensation that was provided to their "white" counterparts.

This is just one more thing we Canadians have to remember on this day. And those who say Remembrance day "glorifies war" should be reminded that Remembrance day is scarcely a glorification of war - it is more a recognition of the irremediable evils that war has always left in its wake. There is no possible monetary or emotional compensation for the families shattered by the loss of their main breadwinner, or the loss of the son who would have taken over the farm, or the fishing boat, or the forestry jobs that ran in their families.

What we, who have tried to fill those missing boots must never forget is that the sacrifice of so many young lives in 2 world wars, changed the very fabric of our societies, both for good and for ill. Those sacrifices are still echoing down the ages and those reverberations will continue to be felt generations from now.