Kenney ‘prepared to be pragmatic’ on oilsands pollution cap 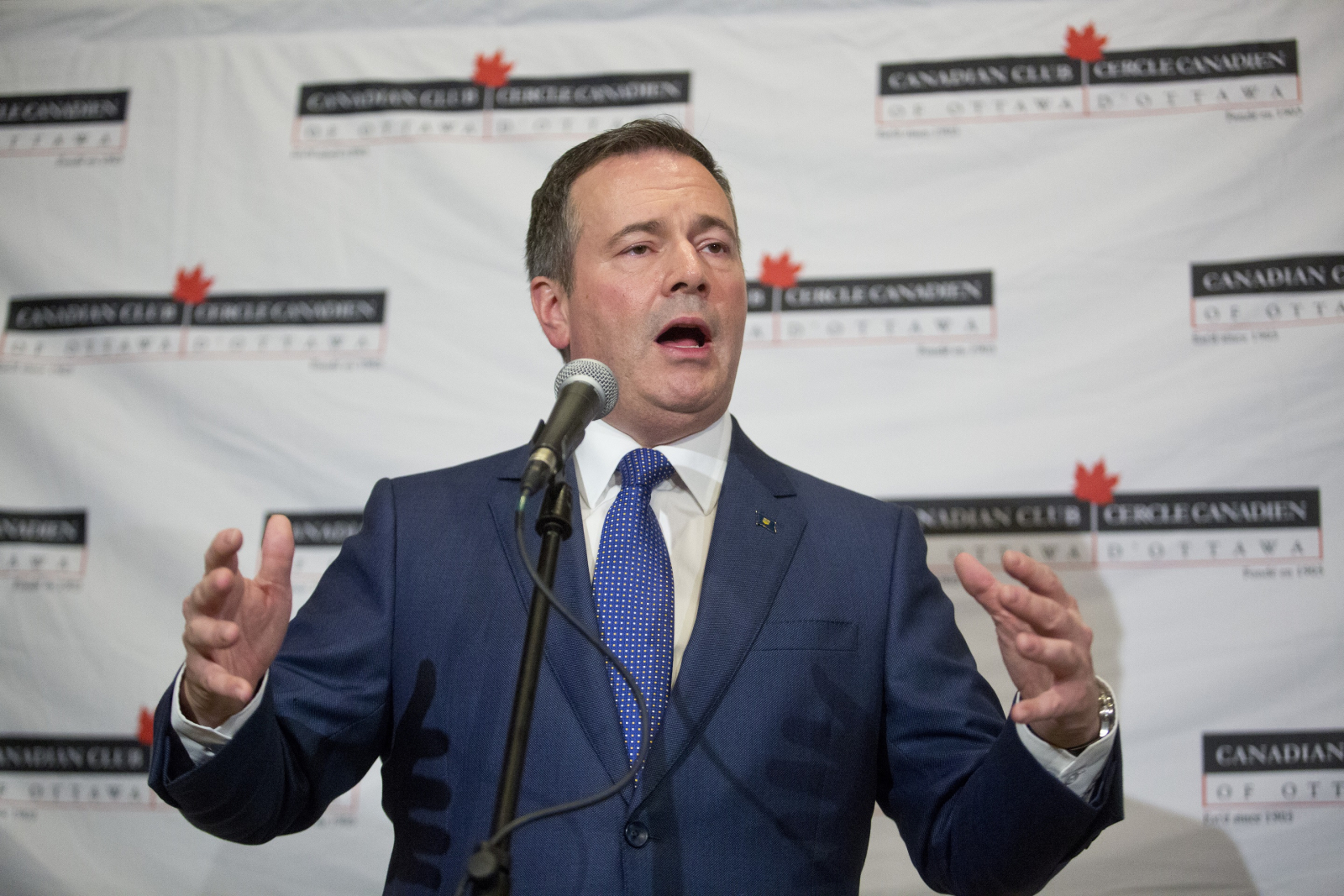 Alberta Premier Jason Kenney speaks to reporters after delivering a speech at the Canadian Club of Ottawa inside the Château Laurier hotel on Dec. 9, 2019. Photo by Andrew Meade
Previous story

Alberta Premier Jason Kenney says he is “prepared to be pragmatic” when it comes to maintaining a cap on pollution from the oilsands, which was put in place by the previous government.

The premier made the remarks following a speech at a luncheon in Ottawa, where he laid out his government’s various demands ahead of a Dec. 10 meeting with Prime Minister Justin Trudeau.

“I told the prime minister in May I’m prepared to talk to him about that,” Kenney said Monday at the Château Laurier hotel, after speaking at a Canadian Club of Ottawa event.

“The NDP government had proposed a 100-megatonne cap on greenhouse gas emissions from the Alberta oilsands in exchange, notionally, for other things including the guaranteed completion of a pipeline...what I’ve said is, we are prepared to be pragmatic.”

From 'hard cap' to pragmatism

Kenney’s predecessor, Rachel Notley, did more than just propose such a cap: Her government passed a law, the Oil Sands Emissions Limit Act, that put one in place in 2016 — pending regulations that would actually spell out how such a cap would function.

The “hard cap,” as Notley liked to call it while premier, was a big part of her pitch that a new pipeline would not lead to increased carbon emissions from companies looking to fill the new space with more fossil fuels.

Yet after a provincial advisory panel came up with a proposed mechanism to allocate the space under the emissions cap in May 2017, the province continued consulting on the issue and regulations were not put in place.

Before the Alberta election, Kenney had been expected to undo Notley-era climate policies, including the oilsands pollution cap. Officials from Kenney’s party had told reporters that they planned to remove the cap once in office.

But after Kenney won he said it was "not a fight that we’re going to get into at this point.”

The oilsands, a region in Alberta and Saskatchewan that contain almost all of Canada’s 173 billion barrels of proven oil reserves, has never been at risk of actually coming close to hitting the cap.

Alberta's carbon pollution increased by 18 per cent from 2005 to 2017, primarily as a result of oil and gas expansion. The oilsands generated 81 megatonnes of pollution in 2017 — more than the entire economies of British Columbia or Quebec, to be sure, but also way under the 100-megatonne cap.

Kenney has said that this meant that the emissions cap is merely an “academic” exercise, and revisited that logic on Monday.

“I don’t believe that we’re going to hit that cap, because the intensity keeps coming down — so even if there’s an increase in production, I believe, and most of our major oilsands producers believe, that we will not hit that number,” he said.

The Canada Energy Regulator has said three-quarters of the crude oil produced in Western Canada is heavier and higher in sulphur than many other crudes, meaning it is costlier and more energy-intensive to upgrade.

Deputy Prime Minister Chrystia Freeland, who is in charge of intergovernmental affairs attended Kenney’s speech and dined with the premier at the event's head table.

Two of Kenney's top staff members, principal secretary Howard Anglin and chief of staff Jamie Huckabay, were also at the table, along with Canadian Club treasurer Martin Rust and the former president of the Business Council of Canada, Thomas D'Aquino.

'The goose that laid the golden egg'

In his speech, Kenney said he would outline five priorities in his meeting with Trudeau: a “fixed deadline” for Trans Mountain; tweaks to fiscal stabilization; the repeal of federal legislation including an environmental assessment overhaul; the approval of a new oilsands mine; an expansion of flow-through shares to include carbon-capture projects; and equivalency recognition for Alberta’s new methane rules with federal rules.

Kenney said he travelled to Ottawa with eight ministers and 11 deputy ministers in order to deliver an "urgent message on behalf of all Albertans”: that the province’s ability to play the role of the country’s "engine of prosperity" is at risk.

"Alberta has been the goose that laid the golden egg,” said the premier.

One of those eight ministers, Jason Nixon, met with his federal counterpart, Environment and Climate Change Minister Jonathan Wilkinson on Monday.

Wilkinson told reporters on Parliament Hill that while the government was “open to how we implement” the environmental assessment law, which was called Bill C-69, “we're not opening the law itself.”

“The law is the law. We are not going to inject uncertainty for business, in terms of reopening a law that was firmly and ferociously debated,” he said. “We are moving on and we're certainly happy to engage the conversation around implementation.”

Kenney said he was “disappointed” in Wilkinson’s earlier comments over the weekend that the jury was still out on the liquefied natural gas industry’s ability to help Canada cut carbon pollution by displacing coal.

Wilkinson is seeking more clarity, both on whether gas would actually displace coal and on the domestic emissions created during liquefaction, he told The Globe and Mail in an article published Sunday.

“I think we’ve got to be very careful about the LNG argument," the minister said.

“I hope he’s not surrendering Canada’s interests before even getting to the Madrid conference,” said Kenney, referring to the 2019 UN Framework Convention on Climate Change meeting this week in Spain.

The idea that Canadian natural gas could be used to displace coal in foreign countries is at the heart of at least two large proposed energy projects: the $40-billion LNG Canada project in B.C., and the $14-billion GNL Quebec project.

Notley's fraudulent oilsands cap was a dodge. A cynical ploy to gain social license for new pipelines.
The NDP left office without implementing regulations for the cap.
Cynical petro-politics. Oilsands emissions do nothing but climb year after year. AB's emissions show no sign of falling.
Total oilsands emissions including projects that are under construction, have received approval, or are seeking approval "blow well past" AB's fraudulent 100 Mt cap. (Pembina Institute)

The oilsands industry may already have surpassed AB's cap. AB's oil & gas industry GROSSLY under-reports its emissions — of all types. The nominal total (80.5 Mt in 2017) is fiction.

Yes, indeed. There has never

Yes, indeed. There has never been a "hard cap". That's because the NDP added multiple exemptions to their law that allow oilsands emissions to rise far beyond the "cap" and without limit. In addition, two of these exemptions -- for any "experimental" or "enhanced" projects -- are so vague that they allow the Alberta government to exempt pretty much whatever they want.

There is no surprise that Kenney and other oilsands expansionists will be more than happy to keep the "fake cap" as a climate-pressure relief valve that really asks nothing of them.

thank you for your fact

thank you for your fact filled responses. I am with you in staying focussed on rebutting the deliberately scare mongering petro apologists. The green possibilities for Alberta are amazing --if they were allowed to as enterprising as they love to brag they are and not silenced and bullied by the petro-captured stooges running the show

Kenney: “I don’t believe that

Kenney: “I don’t believe that we’re going to hit that cap, because the intensity keeps coming down"

The only thing that "keeps coming down" is AB's credibility on emissions reporting and climate action:

- Carbon intensity for in situ projects has increased every year since 2014.
- Total oilsands carbon intensity has increased every year since 2015.
- Oilsands total emissions do nothing but climb year after year.
- AB's emissions show no sign of falling.
- Increasing production will continue to overwhelm any technological improvements.
- Rising oilsands emissions cannot be reconciled with Canada's inadequate climate targets.
- Oilsands expansion will prevent Canada from meeting its inadequate targets for decades.
- Climate action and a growing fossil fuel industry are incompatible.
- AB's oil industry has no climate plan that meet Canada's targets.