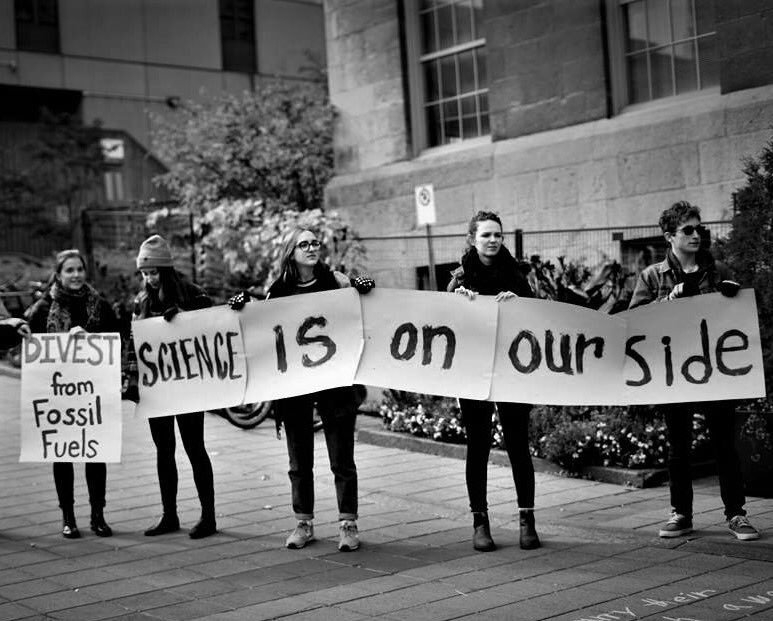 The question is simple: is it socially responsible, in 2019, knowing what we know about the role of fossil fuels in the creation and acceleration of the climate crisis, to invest in the fossil fuel industry? Amazingly, McGill University, through its Board of Governors, has answered yes.

You wouldn’t know it, though, from the University’s misleading press release touting its decision on December 5th to accept the recommendations of the Board’s Committee to Advise on Matters of Social Responsibility (CAMSR). That press release claims that McGill is “moving forward to reduce the overall carbon footprint of its investment portfolio” by “decreasing McGill’s endowment portfolio exposure to carbon-intensive investments, including those within the fossil fuel industry.”

In fact, the actual report by CAMSR reveals that the University has no plans to stop its investment in the fossil fuel industry. The report plainly declares that “divestment from the fossil fuel sector is not advisable” because, among other reasons, “excluding entire sectors of the economy from the MIP [McGill Investment Pool] would likely have a negative impact on diversification and portfolio construction and … this cannot be achieved without affecting the risk/return equation.”

In other words, CAMSR—and now the Board of Governors—has allowed their commitment to social responsibility to be subordinated to other concerns. Indeed, the report states that the committee “did not need to consider the criterion of ‘social injury’” in making its determination.

It is this outcome that we feared when, back in April, we resigned as faculty representatives from the Board of Governors.

Over the past decade, every student, faculty, and staff organization at McGill that has considered the question of fossil fuel divestment has voted to endorse it. This campus-wide support for divestment culminated in a resolution passed in September 2018 by the McGill Senate, the University’s largest representative body. The Senate voted overwhelmingly to inform the Board that “it favours, in principle, a move to divest the endowment from all companies whose primary business is the extraction, distribution, and/or sale of fossil fuels; and from all mutual funds that invest in such companies.”

We initially felt hopeful that our fellow Governors would embrace this resolution, not least because its wording allowed for a fair amount of wiggle room. Among other things, it did not impose a strict timeline for divestment of the university’s fossil fuel investments. All it asked was for a commitment to move in the direction of divestment—to acknowledge what should be plain to anyone watching our climate become increasingly inhospitable to human and other forms of life: that at some point, we all need to get out of fossil fuels for good.

It is this simple commitment that the Board of Governors has soundly rejected. As we predicted back in April, the Board’s process for handling the Senate’s divestment resolution set the stage for this rejection. Rather than voting directly on the principle articulated in that resolution, the Board referred the matter back to CAMSR, the same committee that had twice rejected calls for divestment from fossil fuels (in 2013 and 2016). Seeing where the Board was headed, and increasingly aware that the outcome seemed predetermined, we felt we had no choice but to resign.

It brings us no pleasure to have our grim predictions confirmed.

By approving the CAMSR report, the McGill Board has officially and explicitly rejected institutional divestment from the fossil fuel industry. The wording of the McGill administration’s press release cynically tries to create the opposite impression, by raising a prospect that the binding language of the CAMSR report specifically disavows.

The point of industry-wide divestment is to make real the university’s professed commitment to socially-responsible investing and to engage in moral sanction—to say that the extraction, distribution, and sale of fossil fuels endangers the planet so gravely that this industry cannot be considered just another “normal” business. By continuing to invest in this industry as part of its portfolio, McGill is denying this simple, undeniable fact.

Institutional divestment from fossil fuels is only the first, minimal step toward the rapid transformations that we must undertake if our societies are to survive. You would think our universities would be on the forefront of the changes we must pursue to secure our future. But with its latest Board of Governors decision, McGill University has chosen to block that change.