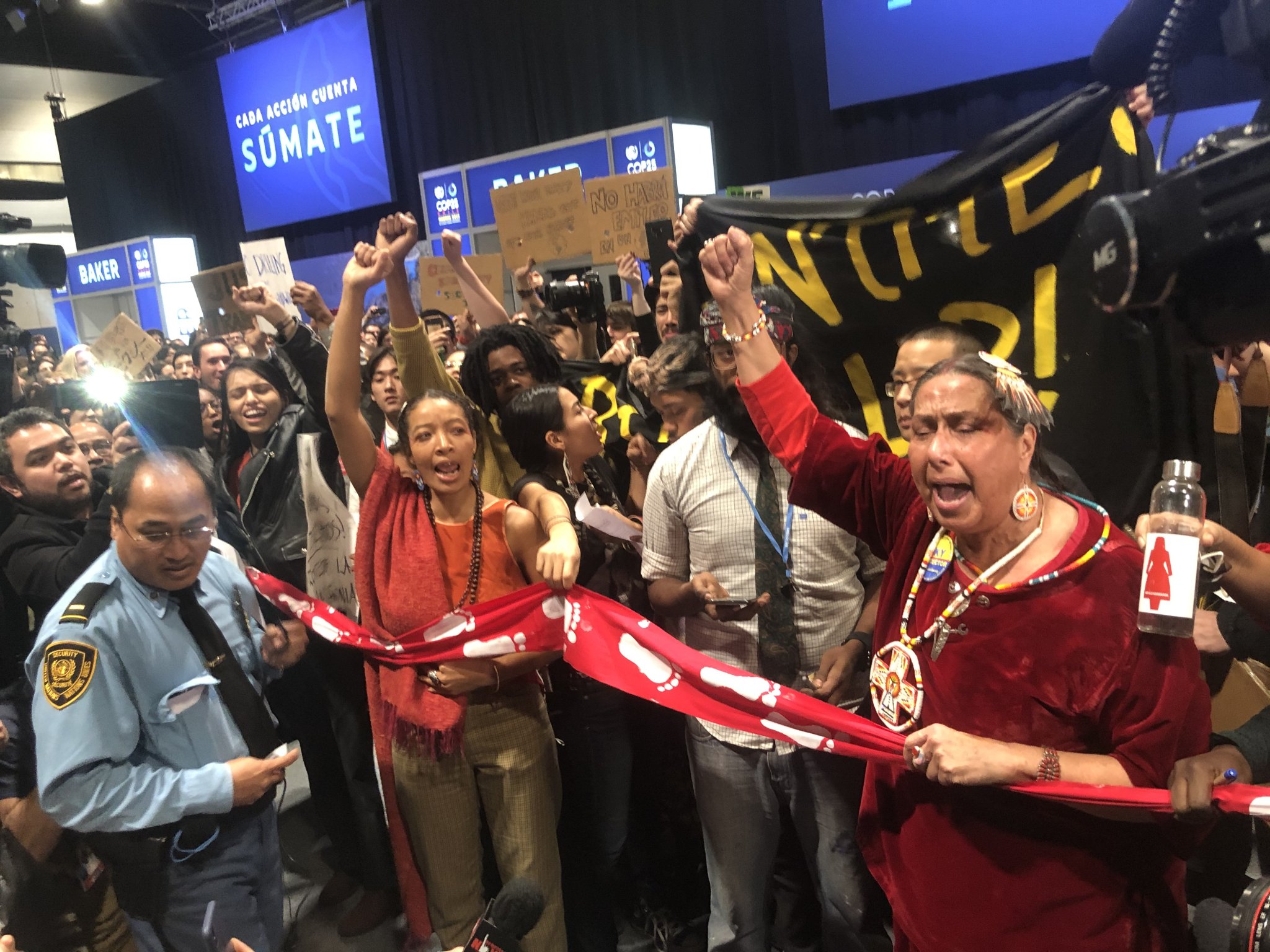 Protests led by Indigenous leaders shut down the main hall of COP25 in Madrid on Wednesday. In an unprecedented event, about 500 people stormed the area outside the high-level negotiations decrying the lack of action by assembled governments to address the climate emergency.

The state of negotiations at COP25 was described as a "Kafkaesque absurdity" by the head of Climate Action Network Canada, Catherine Abreu. On Tuesday, negotiators at one session spent 20 minutes arguing over whether to "adjourn" or "close" their meeting and an equal amount of time debating whether to display items on a projection screen.

The protests themselves had a Kafkaesque quality, taking place in the grand hall festooned with enormous UN signs declaring "#TimeforAction."

Daira Tukano, from the Tukano nation in Northeast Brazil, said the Indigenous leaders had no choice but to break the norms of international diplomacy and upset the negotiations.

"The Amazon is being destroyed by criminal fires, our leaders are being imprisoned and 'disappeared.' This is supposed to be the place where governments protect the earth and the rights of people, but we are not being heard," Tukano said.

The protest took place just hours after Greta Thunberg addressed the delegates, accusing world leaders of "creative PR" and condemning the fact that "since the Paris Agreement, global banks have invested $1.9 trillion in fossil fuels."

United Nations security staff scrambled for about an hour, unsuccessfully, to contain the crowd until reinforcements were finally able to kettle the protestors and force them outside through a large rolling door in the hall.

This is the first time the UN climate negotiations have been rocked by large protests within the negotiating areas. It was not immediately clear what consequences the UN Secretariat would impose as the protestors all had to hold UN accreditation in order to access the area.

Did feds mislead you about pipeline costs?

There was nothing mysterious

There was nothing mysterious nor Kafkaesque. Protesters in Madrid are rightly incensed by the co-option of the COP by corporate interests (esp. banks and fossil fuel companies) and by the the Chilean gov't who was still in charge of the event despite having outsourced it to Spain in order to deflect (successfully, it would seem give the lack of coverage here and elsewhere in the free press) attention from ongoing anti-Neo-Lib protests and harsh police reprisals ("Human Rights Watch found compelling evidence that police used excessive force to respond to protests, injuring thousands of people, whether they were engaged in violent actions or not") in Santiago, Valparaiso, and elsewhere in the country.