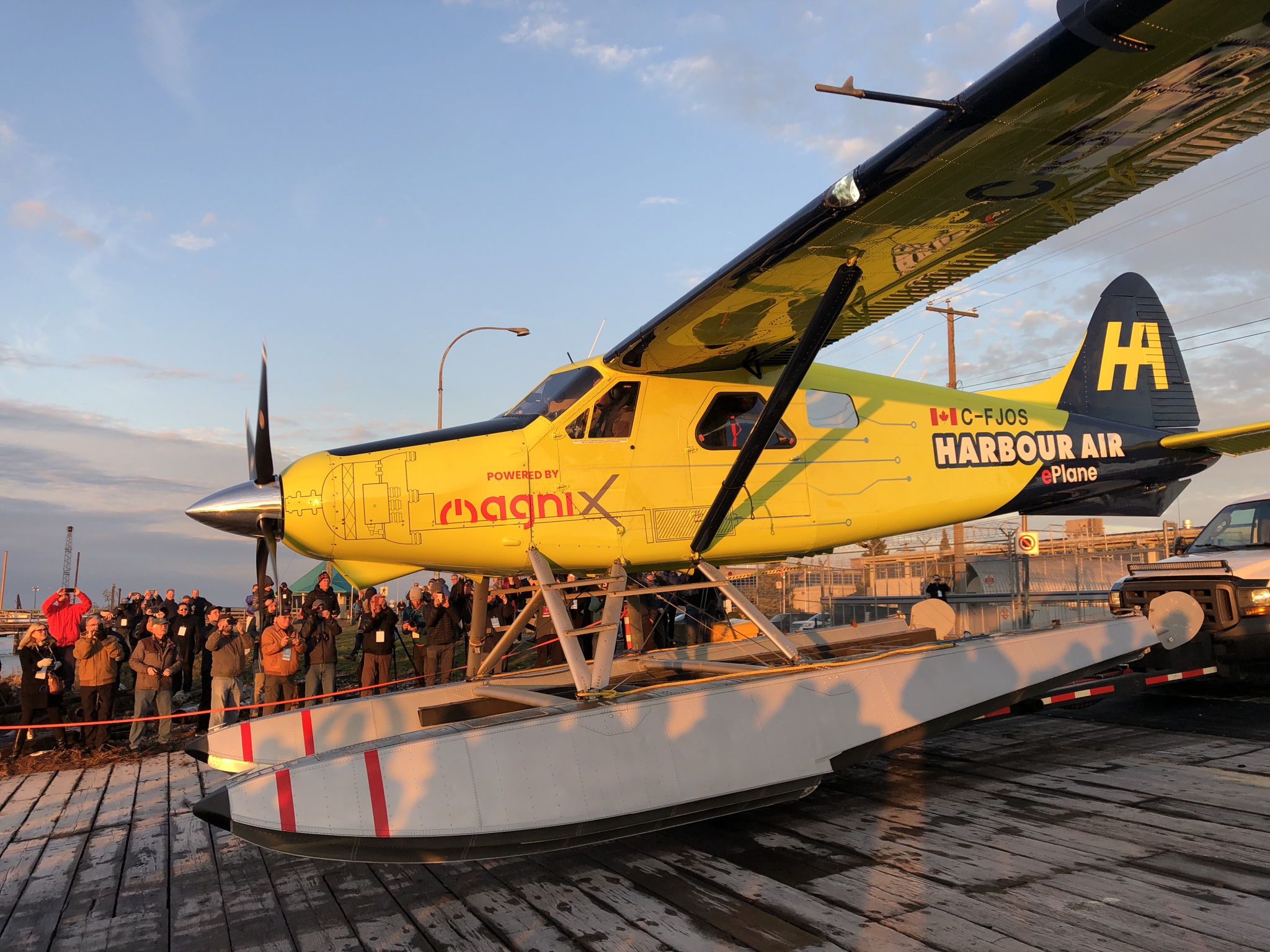 This morning a small Canadian regional airline made history on a quiet stretch of the Fraser River in Richmond, B.C., just south of Vancouver, when its top executive took the controls of a classic Burrard Beaver floatplane retrofitted with a new electric motor, and lifted off to the cheers of an assembled crowd of media and well-wishers.

Harbour Air founder and CEO Greg McDougall completed the five minute test flight without burning a drop of fossil fuel. In doing so, he moved a big step closer towards realizing his long-time vision of creating the world’s first all-electric airline.

"That was just like flying a Beaver but a Beaver on electric steroids." McDougall told a crowd of reporters immediately following the flight. "It was such a great performance we had no way of knowing how it would perform until we flew it, and it was amazing."

It was undeniably a ‘Kitty Hawk moment,’ but the vast carbon footprint of commercial air travel will not be shrinking anytime soon, experts confirm.

Though this morning’s test flight of an all-electric commercial float plane–a global first–justifiably lifted the spirits of all who support real-world climate solutions, it did not herald a green new era for commercial aircraft emissions, experts cautioned.

“A revolution starts, as they say, with the first shot,” magniX CEO Roei Ganzarski told National Observer. “And this flight is that shot.” This past March, McDougall partnered with Seattle-based startup magniX, which developed the 750-horsepower Magni500 electric aircraft motor that powered this morning’s flight.

Ganzarski explained that a variety of factors make Harbour Air, and in particular the routes served by its fleet of DHC-2 de Havilland Beavers, ideal for electrification.

“The Beaver is the perfect plane for this, because it's a workhorse,” said Ganzarski. “It’s a tank. It’s incredibly reliable, easy and simple to operate and modify. If you’re going to try something revolutionary, let's try something that you think has the highest likelihood of success out the door.”

"Tank” might not be the first image that comes to mind when considering electric airplanes, especially given gossamer-light experimental craft such as the Solar Impulse 2 that many may associate with electric aircraft. But the Beaver is not only reliable, it’s iconic. British Columbians know the plane by sight and trust it, which is essential to build customer confidence in a new propulsion system. As for the weight, the direct-drive prop motor has the same heft as the engine it replaces, and the batteries about the same as a full tank of fuel.

Ganzarski said Harbour Air has a fleet of 13 Beavers, and all of them travel routes of under 70 miles in range, which he said is roughly 20 minutes of flight time on batteries, which is more than enough flying time with a generous charge left over for the lithium ion battery packs on board. As a result, the airline will not need to make any significant operational changes to electrify.

But there’s a long way between short-hop prop planes and the commercial passenger jets that cross oceans and continents. Due to fundamental barriers of physics, it is simply impossible to power large planes over longer distances with electricity. The only thing that would do so is a radical breakthrough new energy source with a similar energy density to jet fuel.

According to Transport & Environment, a European NGO, aviation emissions have more than doubled in the last 20 years and the sector is responsible for an estimated 4.9 per cent of all global carbon pollution. International aviation was left out of the Paris Agreement, and the sector has since pursued a voluntary and complicated system based on carbon offsets.

Without policy to limit their growth, global aviation emissions will double or triple by 2050, according to Transport and Environment. In doing so, the sector will consume up to one-quarter of the global carbon budget allowed and still remain under a 1.5 degrees of warming. (In Canada, domestic aviation contributes about 7.1 million metric tonnes of greenhouse gas emissions per year, or one percent of the nation’s total.)

“The science is clear that we will need to halve our emissions by 2030 if we’re to avoid catastrophic climate change,” wrote Andrew Murphy, Transport & Environment’s aviation manager, in an email to the Observer.

“There is zero prospect of electric aircraft making a serious dent in emissions before, or even after that date. And so we need to fly less, and when we do fly—[we must do so using] a fuel other than kerosene,” Murphy added.

Ganzarski said that of all worldwide flights flown last year, about 38 million in total, almost two million—or about five percent—were flown on routes shorter than 100 miles, using planes roughly the same size as those flown by Harbour Air.

According to Andrew Murphy, the vast majority of emissions are from flights of distances greater than 1,111km. “So even if you get to electrifying these aircraft for [shorter] routes, you're missing the vast, vast bulk of emissions.”

Ganzarski nonetheless remained bullish that his electric motors, and short-haul carriers like Harbour Air that would put them to work, will make a difference.

“Being skeptical is easy,” he said. “You don’t need much to point out flaws, what’s hard is to see the vision, to see the future, and go chase it.”

Following what will likely be extensive regulatory reviews, the first commercial flights in Harbour Air’s electrified float planes could take off within one or two years, a Harbour Air spokesperson said.

WOW, this is such great news.

WOW, this is such great news...and good news in our world today is always so welcome. BIG CONGRATS to Harbour Air founder and CEO Greg McDougall and magniX CEO Roei Ganzarski and all their employees and friends! You now have a new one!!! ([email protected])

Suppose you get a plane up

Suppose you get a plane up into the air at 9,000 metres, how much energy does it then take to get the plane to Hong Kong or Paris? What is the minimum required? Put on your physics hat. The answer is zero. Balloonists know this. So suggesting that electric planes cannot do long distance flights is wrong; it is a matter of getting the right technology.

As far as I know, you are the

As far as I know, you are the only national news service that commented on this truly ground-breaking story--as important to the history of aviation as the first flights in Baddeck, Nova Scotia. Congratulations. You have restored at least some of my faith in open, careful, and caring journalism in Canada.