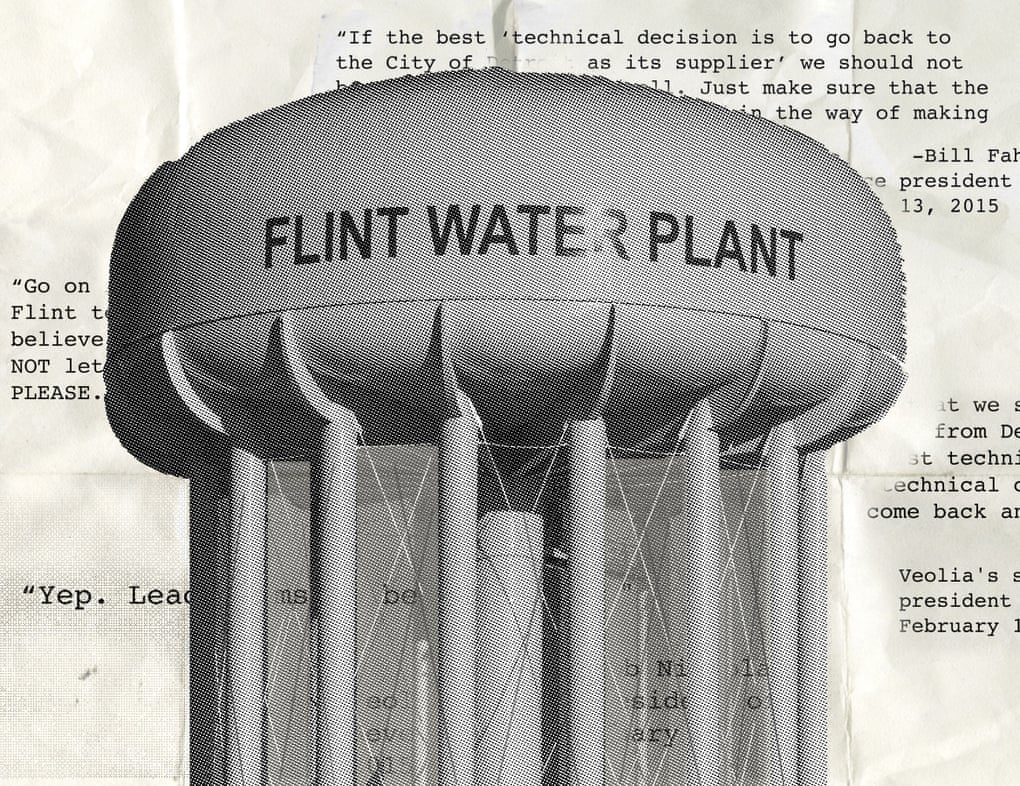 The crisis in Flint, a majority-black city of 100,000, has served as a rallying cry for victims of environmental racism across the US. Illustration: Guardian Design
Previous story

Executives at one of the world’s largest utilities companies knew that families in Flint, Michigan, might be at risk of being poisoned by lead in their tap water months before the city publicly admitted the problem, according to internal company emails.

Email exchanges in February 2015 between executives at Veolia and a city contractor show some senior employees were aware that lead from the city’s pipes could be leaching into drinking water. They argued that city officials should be told to change Flint’s water supply to protect residents.

But the company never made that recommendation public. At the time, Veolia was exploring other lucrative contracts with the city.

Flint began struggling with foul tasting, discolored water after switching to the Flint River as its supply in April 2014. Test results soon showed elevated levels of carcinogens. The water was corrosive, so it was releasing lead from pipes. The city found extraordinarily high lead levels in one resident’s water in February 2015, but residents were not made aware of the extent of the problem until September 2015.

Five years later, the people of Flint continue to demand accountability for the water crisis, which exposed residents to high levels of lead, a potent neurotoxin. Children and infants who consumed the water are likely to suffer lifelong learning disabilities. Flint residents are still advised to either drink bottled water or filter it from the tap.

The emails, reviewed by the Guardian and MLive in a joint investigation, came to light in a lawsuit filed by the Michigan attorney general in the Genesee county circuit court. The lawsuit accused Veolia of “professional negligence, negligence, public nuisance, unjust enrichment and fraud”. The attorney general alleged Veolia gave Flint bad advice, and did not help it to prevent its lead crisis by pushing harder for safeguards against corrosion or a switch to a different water supply.

The court dismissed nearly all of the claims against Veolia last month, citing mainly procedural reasons. One claim remains, for unjust enrichment.

The internal Veolia emails, obtained from the court by the watchdog group Corporate Accountability, show company executives discussing the possibility of lead seven months before the city confirmed the problem publicly.

On 9 February 2015, a Veolia vice-president wrote an email to company executives saying the firm had previously identified the risk of lead contamination.

“Do not pass this on,” wrote Rob Nicholas, then the vice-president of development, in an email to Veolia executives. “The city however needs to be aware of this problem with lead and operate the system to minimize this as much as possible and consider the impact in future plans. We had already identified that as something to be reviewed.”

Days later, Bill Fahey, Veolia’s technology vice-president, emailed senior executives calling for the company to advise Flint to change its water supply, adding that “the politics of this should not get in the way of making the best recommendation”. Reiterating the call in another email, he added: “PLEASE… this will come back and bite us.”

‘The facts were unknown, concealed and covered up’

Veolia signed a $40,000 contract with Flint on 10 February 2015 for a “top-down assessment” of Flint water, and its proposal said it would review and evaluate the city’s water treatment process and distribution system.

But Veolia has said it was only hired by the city to assess bacteria and harmful chlorine compounds (trihalomethanes) in Flint’s water supply, not lead.

Veolia said it nonetheless warned city officials about the possibility of lead contamination, and that the city resisted discussions of changing its water supply. Veolia said it warned the then mayor, Dayne Walling, about how the corrosive water could cause lead to leach from the pipes and raised corrosion in a final public report to the city on 18 March 2015. But that report did not disclose the possibility for lead contamination, focusing instead on how corrosion could be causing water discoloration.

Months prior, in 2014, Flint had switched its water supply from the Detroit water system to the Flint River. But the Flint River water was not properly treated to reduce its corrosive properties on old pipes. So in addition to the bacteria and trihalomethanes, lead from the pipes began to flow into local taps.

In a 20-page response to questions from the Guardian and MLive, Veolia argued that city and state officials caused the crisis and are now “trying to create a corporate villain where one does not exist”.

“It is critical when analyzing what happened in Flint to remember the context of the situation at the time it occurred; we now know in 2019 the myriad of ways that the government officials behaved badly, but as the Flint water crisis unfolded many of those facts were unknown, concealed and covered up by the government perpetrators,” Veolia said.

Nayyirah Shariff, director of the local activism group Flint Rising, recalls presentations Veolia executives made to city officials and the public at the time, in a news conference on 10 February and public meetings on 18 February and 19 March.

She remembers feeling the company downplayed the concerns of residents.

“They were like, ‘everything is fine,” Shariff said. To her, Veolia’s assessment at the time “raised more questions and didn’t add up to what we were beginning to see”.

An MLive article on that presentation was headlined: “Despite quality problems, ‘Your water is safe,’ says Flint consultant.”

A clash over solutions

The crisis in Flint, a majority-black city of 100,000, has served as a rallying cry for victims of environmental racism across the US. And Flint’s experience has been a precursor to lead discoveries in the water in Detroit; Newark, New Jersey; and Pittsburgh.

Flint residents have filed more than a dozen lawsuits against the city, the state and the federal government. The state attorney general is suing the two companies hired to help at the time – Veolia and Lockwood Andrews Newman (LAN), which worked with Flint before the water switch.

LAN officials have said Flint emergency managers routinely ignored doing what was best for the city’s water system and instead did what was cheapest.

The internal Veolia emails show Veolia executives were quick to recognize that Flint’s water system was fraught with problems that stemmed from lack of investment, outdated equipment and unqualified workers.

“There is no process control, plant operators are not well trained, data is not well managed or trended, just reported to the state,” Gnagy, the water process and quality manager for Veolia, wrote in a work summary dated 12 February 2015.

Multiple emails show individuals at Veolia clashing over whether to recommend that Flint change its water source. Veolia’s technology vice-president Fahey in February told the engineering vice-president, Kevin Hagerty: “If the best ‘technical decision is to go back to the city of Detroit as its supplier’ we should not be afraid to make that call. Just make sure that the politics of this should not get in the way of making the best recommendation.”

When Veolia’s director of treatment plant operations, Joseph Nasuta, said that Veolia’s business development department, or “BD”, was refusing to suggest the switch, Fahey reiterated: “Go on record with BD that we should advise Flint to open the valve from Detroit if we believe that is the best technical solution. DO NOT let BD make any technical calls. PLEASE… this will come back and bite us.”

Veolia today maintains that Flint’s emergency manager, Gerald Ambrose, would not discuss changing the water source. Ambrose told Veolia to “assess the current situation and provide recommendations to address the stated problems” and “not be drawn into discussion” on the merits of the water switch, according to an email on 14 February 2015.

Ambrose could not be reached for comment through an attorney who has represented him in matters related to the water crisis. Multiple attempts were made to contact Ambrose for comment on this article.

Flint’s former mayor Dayne Walling said in response to questions about Veolia’s work that he “understood the scope to be comprehensive, scientific and technical in regards to the water safety and quality”.

Veolia was interested in securing future work with Flint in early 2015. On 19 February 2015, Veolia’s communications vice-president, Scott Edwards, said in an email that work already under way in Flint could lead to a $15m to $30m annual contract. Veolia disputes that its recommendations in Flint might have been colored by the prospect of future business with the city.

“The documents show a Veolia executive, a month before the corporation told the city its water was safe, saying that ‘lead seems to be a problem,’” she said. “I think anyone has to ask themselves how the story in Flint would be different five years later now if Veolia had made those private concerns public.”

It's not just Flint: lead in Canadian pipes, too, experts say