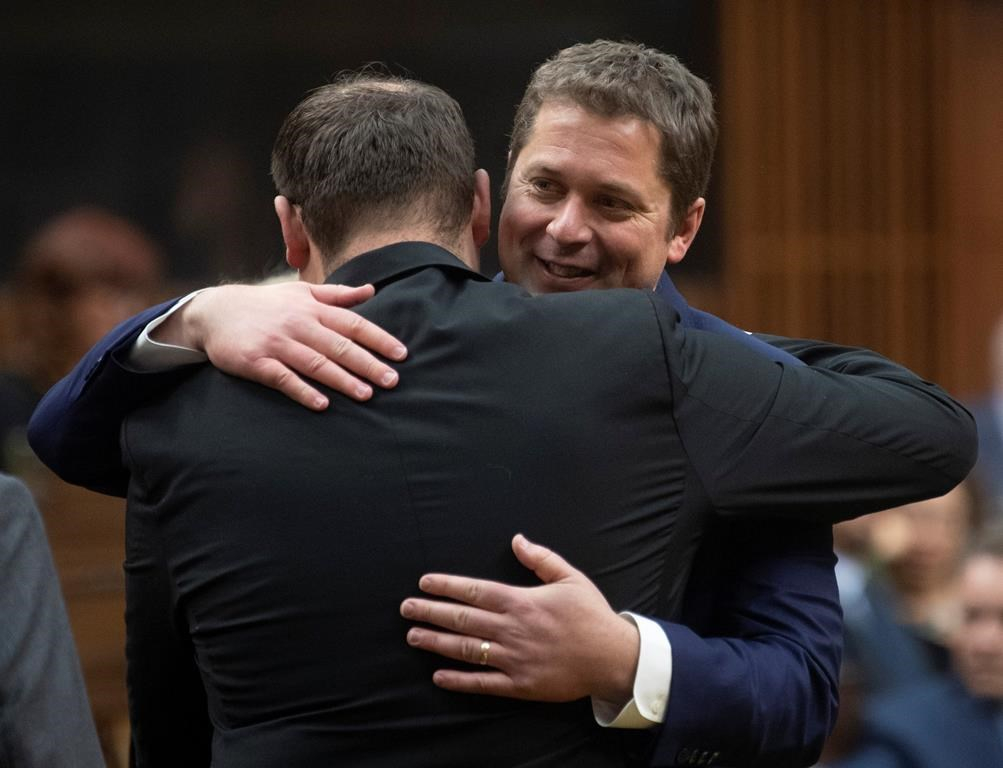 Conservative MP's pay their respects to Leader of the Opposition Andrew Scheer following the announcement he will step down as leader of the Conservatives, on December 12, 2019 in the House of Commons in Ottawa. Photo by The Canadian Press/Adrian Wyld
Previous story
Next story

Signs began to emerge Friday that the coming race to replace outgoing Conservative Leader Andrew Scheer will be an acid test for whether social conservatives have a place in the Conservative Party of Canada.

But difficult as that discussion could be for the party, an even nastier, more personal fight is threatening to unravel the party's governance structure. At the centre of it is executive director Dustin Van Vugt, whose status as the party's chief operating officer was in limbo Friday night.

For weeks since the October election, Scheer has been hammered by progressives in the party who say his unclear positions on social issues like abortion and his refusal to fully stand up for LGBTQ rights contributed heavily to the party's defeat in October.

Many demanded his resignation, insisting the Conservatives will not win in Ontario and Quebec if they can't put up a leader who will march comfortably, and be welcome, in Pride parades.

But Scheer's reluctance, and many times refusal, to explain his position on abortion or why he won't attend events to stand up for LGBTQ rights, was not what finally pushed him out the door. It was instead, an agreement between him and Van Vugt to have the party pay to send Scheer's kids to a private Ottawa Catholic school.

It was less than 24 hours from when information about the deal was slipped to some media outlets that Scheer informed the Conservative caucus he was going to step down.

Van Vugt confirmed in a statement Thursday that the payments had been approved by the party.

But according to some Conservatives, who were not authorized to speak publicly about internal matters, the news was a surprise to directors of the Conservative Fund, a separate entity that raises money for the party. Its directors include former prime minister Stephen Harper, former senator Irving Gerstein, and current senator Linda Frum, according to public listings.

The Fund's directors held a conference call Friday, after which an email was circulated to employees at Ottawa headquarters saying Van Vugt was no longer employed there.

But under the party's constitution, the Conservative Fund doesn't have the authority to fire the executive director.

The constitution says the leader, who is still Andrew Scheer, gets to hire that person, upon approval of the national council, a body elected by the party membership to represent every province. It's not clear who has the authority to dismiss him.

The Fund, however, holds the purse strings and can decide simply to stop supplying the money to pay him.

The party's officials did not reply to questions about Van Vugt's status Friday.

Van Vugt would ordinarily be the person in charge of organizing the Conservative leadership contest.

Tories have shown an ability to be quick about choosing a leader. In 2018, Ontario leader Patrick Brown resigned in the midst of allegations of sexual impropriety. Forty-five days later, Doug Ford was elected as the new Ontario Progressive Conservative leader, and three months after that he was elected premier.

"It can be done," said Jamie Ellerton, a Toronto-based public-affairs specialist who was a key member of Scheer's campaign communications team in the fall campaign.

The Conservatives have a Toronto convention already scheduled for April, which is an obvious opportunity to choose a new leader.

Ellerton has been one of Scheer's most vocal critics since the election over his refusal to stand up clearly for LGBTQ rights. He said Friday the leadership race has to be about "electability."

"If you look at anything relating to LGBTQ issues and LGBTQ people the party needs to be unequivocal in respecting all Canadians and welcoming them into the fold. I would expect any successful leadership candidate would have no qualms about expressing just that."

Joseph Ben-Ami, an Ottawa-based strategist who ran former MP Brad Trost's leadership campaign in 2017, said he thinks it is unfair to say social conservative viewpoints are unwelcome. Trost was one of the firm social-conservative candidates in the last race, and finished fourth. His backers largely went to Scheer, allowing Scheer to slip ahead of Maxime Bernier and win the leadership on the 13th and final ballot.

Ben-Ami argues the facts that Scheer is anti-abortion and won't march in a Pride parade are not themselves problematic, "it's that he treated them as if they were a problem."

"The people who are talking about this and are fixated on it are deceiving themselves as conservatives if they think that if only we had a leader that marches in the gay-pride parade then everything is going to be fine."

Having the party pay for Scheer's kids to go to private school — he has four school-aged kids, and tuition is about $15,000 a year — did not sit well with many Conservatives.

Former Conservative senator Jean-Guy Dagenais, who left the Conservative caucus this fall because of Scheer's socially conservative views, said Thursday Scheer should have to pay the money back.

Teneycke, who ran Bernier's leadership campaign three years ago, has also been among Scheer's fiercest critics since October.

—With files from Stephanie Levitz

So, will Conservatives use

So, will Conservatives use this moment to think about the wider world, and the destruction to democracy and global living standards, as well as chance of survival, being wrought by an increasing number of sociopathic far right leaders, and decide to move in the other direction, shining a light that perhaps the rest of the world may begin to turn towards (like the sardine movement in Italy)? Or will they cast about for the most harmful power-hungry sociopath and manipulator they can find in their ranks, to join into the global race to the bottom, and to extinction?

I don't think Scheer lost because of his social conservatism but probably because Canada hadn't yet been completely taken over by foreign election interference, fear-driven bigotry, and misinformation campaigns. We need to continue to be on guard, and hope for a swing in the tide of human affairs, so that we manage somehow to pull back from the brink that has been created by the centralization of power in the hands of corrupt executives and their political partners. Canada needs its own "sardines" movement, which ultimately, is simply a proactive push for collaborative human decency. Important products for sardines to continue to invest in: local independent and national media; public education and healthcare; an independent non-partisan judiciary; and electoral reform, so as to limit the corrupt influence of lobbyists in backrooms on all levels of our governments.