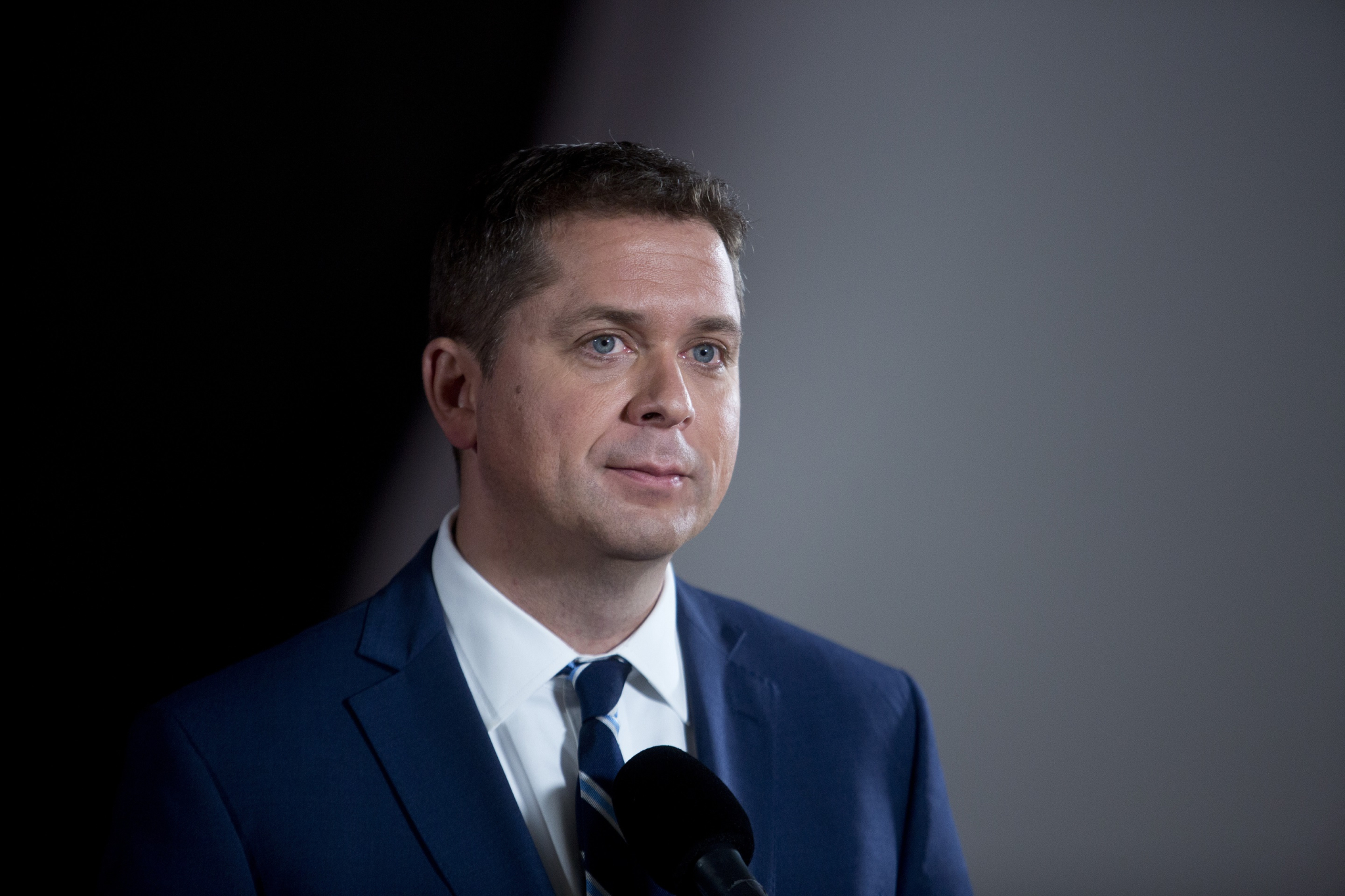 Andrew Scheer is stepping down as Conservative Party leader amid allegations he used party funds to pay for his kids’ private school tuition.

The Tory leader, who was first elected as an MP in 2004 at the age of 25, rose to make the announcement in the House of Commons on Thursday, saying the conservative movement "needs someone who can give 100 per cent," and it was time for him "to put my family first."

Scheer said he will ask the party's national council to "immediately begin the process of organizing a leadership election." He intends to stay on as leader of the party until a new one is chosen, he added, and will continue to serve constituents in his riding of Regina—Qu'Appelle as a member of Parliament. The party's mandatory leadership review is scheduled for April.

"Serving as leader of the party that I love so much has been the opportunity and challenge of a lifetime, and this was not a decision I came to lightly," said Scheer. "This was a decision I came to after many long, hard conversations with friends and family, over the past two months since the election campaign."

Moments before Scheer started speaking, Global News reported the allegations about Scheer's use of party funds. Senior Conservatives alleged the money was spent without approval from the Conservative fund board, Global reported.

Maclean’s had contacted a senior party official several days ago to ask if the party was paying school fees for Scheer's children, the magazine reported Thursday. A senior official first denied the allegations, then followed up and realized the party was paying fees. Sources told Global this led to the resignation.

In a statement Thursday afternoon, Conservative Party executive director Dustin van Vugt said "all proper procedures were followed and signed off on by the appropriate people."

"As is the normal practice for political parties, the Party offered to reimburse some of the costs associated with being a national leader and re-locating the family to Ottawa," the statement said.

"Shortly after Mr. Scheer was elected leader, we had a meeting where I made a standard offer to cover costs associated with moving his family from Regina to Ottawa. This includes a differential in schooling costs between Regina and Ottawa."

Many Canadians came to know Scheer after the Conservatives won a majority in 2011, and he was elected Speaker of the House that June. At the age of 32, Scheer was the youngest House speaker in Canadian history.

After the Harper government fell in 2015, Scheer gave up his position as Opposition House leader to prepare for the Conservative leadership race. On May 27, 2017, he was elected as Tory leader, but not before a tough fight with competitor Maxime Bernier.

Scheer prevailed though 13 rounds of voting in a very close race, that set in motion Bernier's decision to quit the party in August 2018, saying it had become "intellectually and morally corrupt."

Bernier launched his own party the following month, which competed in the 2019 election but did not win any seats. Yet, while Scheer led the Conservatives to a net gain of 26 seats and held the Liberals to a minority, he has faced serious criticism since the Oct. 21 vote, for a number of reasons.

His campaign was marked by stumbles ⁠— particularly on the climate file and on social issues ⁠— which caused internal divisions to spill over into the public realm in the weeks after the vote.

More than half of voters were unhappy with Scheer’s climate plan, according to a November poll conducted by Pollara Strategic Insights for Clean Energy Canada, a think tank based at Simon Fraser University.

The glossy, full-colour environmental plan was meant to ensure Canada achieves its target to lower carbon pollution, but it was vague on how it would get there, and was criticized by many scientists.

It did not project how much each of its proposed initiatives, like new tax deductions or investment in technology, would actually lower pollution. Party officials could not describe to National Observer any academic studies or research material that underpinned the plan's legitimacy.

Former Tory MP Lisa Raitt, who lost her seat in the election, has said Scheer’s climate plan was a “big issue” for voters. Scheer, for his part, has said he thought the plan wasn’t well communicated.

​​​​​​As Scheer continued to talk publicly about supporting the energy industry and criticizing the Liberals' carbon pricing system, he also came under ethical scrutiny for his conversations with wealthy oil and gas executives. He refused to apologize, for instance, for attending a closed-door meeting with industry players at a luxury resort in Alberta.

In May 2019, National Observer reported that Scheer had held a conversation with an energy company CEO at a fundraising gala in Ottawa called Politics and the Pen, where the company also sponsored the dinner. It later filed a lobbying report related to the interaction.

That and other interactions became the subject of an elections watchdog complaint from Democracy Watch that the Conservative Party and Canada's largest oil and gas lobby group, the Canadian Association of Petroleum Producers (CAPP) were possibly "colluding" in violation of the country's elections law.

Democracy Watch co-founder Duff Conacher said Thursday that he still plans to push ahead with the complaint. “It is still important, even though Scheer is no longer leader, to have a legally correct ruling on whether what the CAPP people did, and what the head of oil and gas company did at the Politics and the Pen event, cross the lines in the Lobbyists’ Code of Conduct,” he said.

Rocked by divisions in the movement

As leader, Scheer took constant fire over his stance on abortion rights, marriage and his refusal to march in Pride parades.

He spent weeks on the campaign trail dodging questions about all three issues, eventually saying that while he didn’t personally support LGBTQ rights and abortion, he would fight for all Canadians’ fundamental freedoms ⁠— a message that failed to quell voter concerns.

Two former Conservative strategists authored a piece in The Globe and Mail accusing the party's stances on social issues of being "stuck in the past."

Former cabinet minister Ed Fast, a senior MP, declined a spot in Scheer’s shadow cabinet, saying "Mr. Scheer is entitled to surround himself with a team that fully supports his leadership."

In the end, Scheer’s failure to capitalize on a string of Liberal scandals ⁠— including images of Prime Minister Justin Trudeau in blackface and brownface ⁠— amounted to him missing a “breakaway on an open net,” MacKay said.

Ford notably was not invited to campaign with Scheer in the October federal election, and was rarely mentioned by the federal Tory leader, which left some of the premier’s staff and strategists upset.

One member of Ford’s caucus appeared to celebrate the news. “There is no question, it’s time for a #FreshModernCPC!” tweeted Roman Baber, the Progressive Conservative MPP for York Centre, along with a link to an article about Scheer’s resignation.

Ford’s office said he is not interested in joining the federal Conservative leadership race.

“I wish Andrew Scheer all the best as he undertakes this new chapter in his life, and thank him for his service as the head of Her Majesty’s Loyal Opposition and leader of the Conservative Party,” said Ford, in a statement. “I also want to take this opportunity to give my best wishes to Mr. Scheer’s wife Jill and their five children.”

Alberta Premier Jason Kenney told the Calgary Herald that his top choice to lead the federal Conservatives would be former Harper-era cabinet minister Rona Ambrose, who served as interim leader of the party during the 2017 leadership race that saw Scheer elected.

“She can certainly expect a call from me asking her to consider it,” he told the Herald. “I know Rona loves the fact that she has a normal life these days, a personal life. But I would say to her, to any number of people, voters told us they want a new prime minister.”

Tributes pour in for Scheer

“Obviously he’s reflected on what’s best for the party,” said Calandra in a media scrum at the Ontario Legislature on Thursday. “Scheer’s decision is his decision.”

Trudeau paid tribute to Scheer in the House after the Tory leader had finished speaking, by noting his devotion to working towards a better future for his children.

"There are few people who know the challenges and the opportunities as well as the barriers that exist when you are the leader of a party," said the prime minister.

Scheer later acknowledged how he appreciated the opportunities he had to catch up with Trudeau on being a father.

"We know that politics is tough. There's a human reality behind this story today," said Economic Development Minister Mélanie Joly in the House foyer. At the same time, she said, "Andrew Scheer had really strong positions on women's rights" and "people are past that in Canada."

NDP Leader Jagmeet Singh echoed Trudeau's message: “You’re not only working for and representing the people, and working for the people in your riding...you’re doing this for a better future for your kids,” he said.

“We may have differences of opinions," said Bloc Québécois leader Yves-François Blanchet, but he added "I have confidence that these differences have improved the debate here and I have the certainty that the member has done exceptional work in this regard."

with files from Sean Craig

Editor's note: This story was updated at 3:04 p.m. Eastern on Dec. 12, 2019 to include numerous quotes and additional information about Scheer and his leadership.

Ontario will need another

Ontario will need another provincial NDP majority to get them through tough times, though it will probably be followed by a return to the blue. Until then, the Conservative Party will never form a federal government again, nor will an extremist party ever become relevant.

Even Doug Ford admitted the likelihood that some of his own provincial supporters backed the federal Liberals.
* https://www.nationalobserver.com/2019/11/24/news/now-doug-ford-wants-cal...