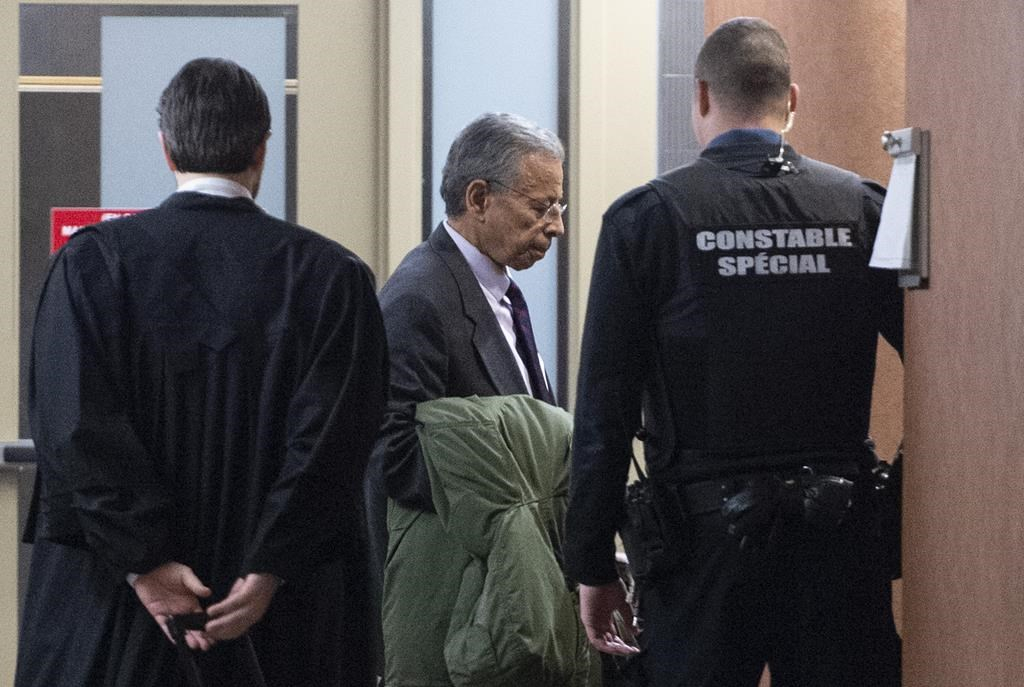 A former SNC-Lavalin executive was found guilty on Sunday of paying off foreign officials and pocketing millions as he worked to secure contracts for the Canadian engineering company in Libya.

On the fourth day of deliberations, a jury found Sami Bebawi, 73, guilty of all five charges he faced, including fraud, corruption of foreign officials and laundering proceeds of crime.

Quebec Superior Court Justice Guy Cournoyer ruled Bebawi would remain free until sentencing, noting there was no new evidence to suggest he was a flight risk.

Neither the accused nor his lawyer commented as they left the courtroom, and did not answer a reporter who asked if they'd appeal.

Federal prosecutor Anne-Marie Manoukian declined to say what sentence she intends to seek when the case returns to court Thursday.

She noted the volume and complexity of the evidence presented during the six-week trial.

"The jury looked at all the evidence and analyzed it thoroughly during the deliberations, so I think in this case justice was rendered," she said.

The Crown had said Bebawi was behind a "business model" that involved kickbacks and payoffs to foreign agents to secure lucrative deals for the Montreal-based engineering giant in Libya, beginning in the late 1990s.

The case centred on several major infrastructure projects and dealings with Saadi Gadhafi, one of the sons of late Libyan dictator Moammar Gadhafi.

Prosecutors presented evidence that SNC-Lavalin transferred about $113 million to shell companies used to pay off people, including Saadi Gadhafi, who helped the company secure deals in Libya.

What remained in the accounts of those firms after the kickbacks were paid was then split between Bebawi and Riadh Ben Aissa, a former colleague, with Bebawi allegedly receiving about $26 million.

Bebawi did not testify, but he denied the allegations through his lawyer in closing arguments, saying the millions were compensation for completing complicated contracts, authorized by the former president of the company, Jacques Lamarre.

Bebawi was the last former SNC-Lavalin employee charged in the aftermath of an RCMP investigation into the company's dealings in Libya to have his case resolved.

The company and two of its subsidiaries still face charges that they paid nearly $48 million to public officials in Libya between 2001 and 2011 to influence government decisions. The company is also accused of fraud and corruption for allegedly defrauding various Libyan organizations of roughly $130 million.

It was that case that thrust the Montreal company into the centre of a political controversy this year involving the governing Liberals.

The SNC-Lavalin affair revolved around Jody Wilson-Raybould's claim that as attorney general she was pressured by people in Prime Minister Justin Trudeau's inner circle to settle criminal charges against the company through a new legal tool comparable to a plea deal.

Wilson-Raybould and Jane Philpott were ejected from the Liberal caucus in the aftermath of the allegations, Trudeau's right-hand man Gerald Butts resigned and Michael Wernick, the country's top bureaucrat, retired. Trudeau was later found to have violated conflict of ethics rules by intervening in the case.

The case against SNC-Lavalin remains before the courts and is due back before a judge this week.

In the Bebawi case, the Crown had argued the former SNC-Lavalin vice-president was the architect of a scheme that involved greasing the wheels in Libya to secure major contracts.

The Crown's star witness in the case was Ben Aissa, a former subordinate of Bebawi who later rose to become a company executive.

The Crown argued the company dealt with the younger Gadhafi to facilitate business dealings in Libya, and the alleged kickbacks involved massive contracts won by the Montreal engineering giant for contracts doled out during Gadhafi's dictatorship.

Among the kickbacks to the younger Gadhafi was a U.S.-made luxury yacht — the Hokulani — purchased for $25 million. He was also photographed in a visit to company headquarters in Montreal.

For its part, the defence claimed that the amounts transferred to Bebawi were legitimate bonuses authorized by the company's president at the time, Jacques Lamarre.

Bebawi's attorney argued there was no evidence of any of the contracts secured in Libya being inflated and described the Crown's key witness — Ben Aissa — as unreliable.

The defence disputed that the younger Gadhafi qualified as a foreign public official, describing him instead as a "spoiled child" who had a direct line to the late dictator but was not able to approve deals himself.

But the jury also heard evidence that Bebawi and his tax lawyer, Constantine Kyres, tried to offer a $10-million bribe to have Ben Aissa change his testimony to torpedo the case against Bebawi. Ben Aissa was detained at the time in Switzerland on Libya-related charges and informed authorities of the bribe.

The RCMP started an operation using an undercover agent during which the $10-million offer evolved into a $4-million "loan" that wouldn't have to be repaid, an idea that the jury heard came from Bebawi.

Ben Aissa spent 30 months in preventive detention in Switzerland before pleading guilty there to bribing foreign officials and money-laundering stemming from the Libya dealings. He signed an agreement to co-operate with the RCMP before being extradited to Canada.

The jury in the Bebawi case did not hear that obstruction of justice charges against Bebawi and Kyres related to the alleged bribe were dropped earlier this year after the Crown took too long to bring the case to trial.

In February, Stephane Roy, another former executive charged in relation to company dealings in Libya, received a stay of proceedings due to unreasonable delays in bringing his case to trial.

This report by The Canadian Press was first published Dec. 15, 2019.