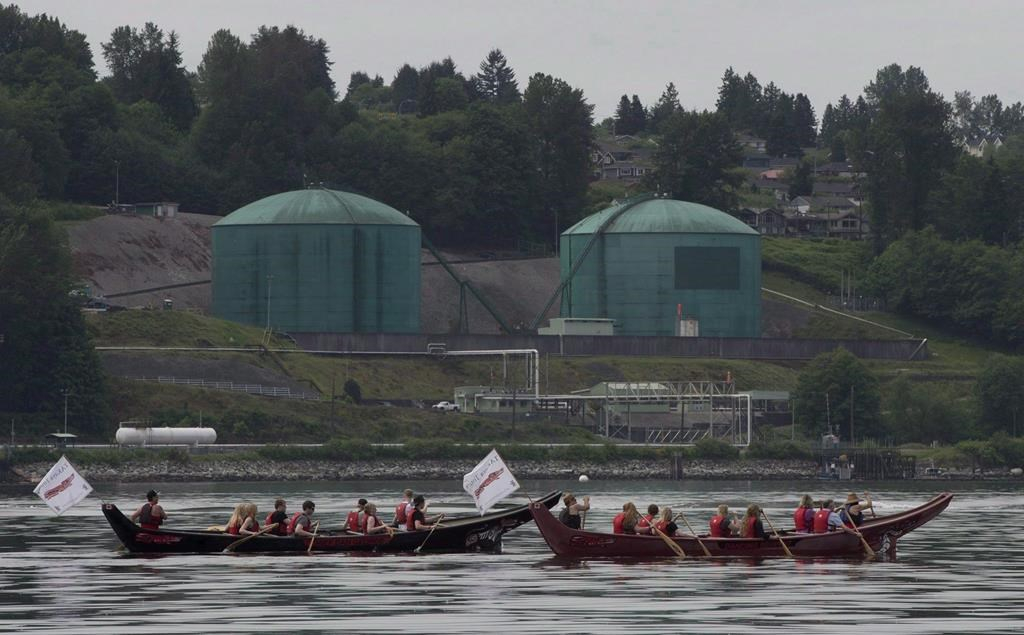 Four British Columbia Indigenous groups are set to argue in the Federal Court of Appeal that the Canadian government failed to consult adequately with them before its latest approval of the Trans Mountain pipeline expansion.

A three-day hearing is scheduled to begin today in Vancouver to consider legal challenges launched by the Tsleil-Waututh Nation, Squamish Nation, Coldwater Indian Band and a coalition of small First Nations in the Fraser Valley.

Several First Nations, environmental groups and the City of Vancouver had originally filed challenges making a range of arguments including that the project threatens southern resident killer whales off B.C.'s coast.

The court only allowed six First Nations to proceed and called for an expedited hearing focused on the federal government's consultation with Indigenous communities between August 2018 and June 2019.

Two First Nations have since dropped out of the appeal after signing deals with Trans Mountain Corp., the Crown corporation that operates the pipeline and is building the expansion.

The Tsleil-Waututh and environmental groups filed leave to appeal to the Supreme Court of Canada, arguing that a broader hearing was necessary, but the high court has not yet issued a decision.

Leaders of the four Indigenous groups that are still challenging the project are expected to speak at a news conference before the hearing begins this morning.

Prime Minister Justin Trudeau's government has twice approved a plan to triple the capacity of the pipeline from Alberta's oilsands to a shipping terminal in Metro Vancouver.

The Federal Court of Appeal tore up the original approval in August 2018, citing both an insufficient environmental review and inadequate Indigenous consultation.

The Liberal government ordered the National Energy Board, now known as the Canada Energy Regulator, to conduct a new review focusing on marine impacts, which was completed in February.

The government also appointed retired Supreme Court justice Frank Iacobucci to oversee a new phase of consultation with affected Indigenous communities, before it approved the project a second time in June.

However, the four Indigenous groups allege that the government came into consultations having predetermined the outcome.

"Many of the Indigenous and First Nation applicants now allege that the poor quality and hurried nature of this further consultation rendered it inadequate," Federal Court of Appeal Justice David Stratas said in his decision allowing the legal challenges to proceed.

The governments of Alberta and Saskatchewan, which support the pipeline expansion, have joined the case as interveners.

This report by The Canadian Press was first published Dec. 16, 2019.