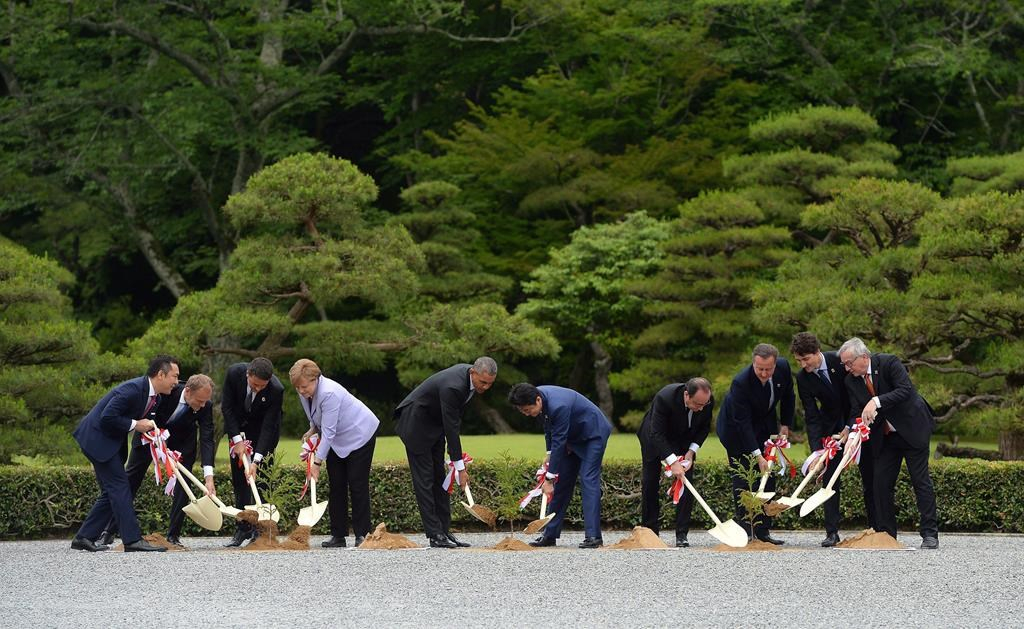 World leaders take part in the tree planting as they visit the Ise Grand Shrine (Ise Jingu) in Ise, Japan during the G7 Summit on Thursday, May 26, 2016. File photo by The Canadian Press/Sean Kilpatrick
Previous story
Next story

A green economy think tank at the University of Ottawa says the federal government's promise to plant two billion trees over the next 10 years is a cheap way to pull greenhouse gases out of the atmosphere.

Prime Minister Justin Trudeau's promised during the campaign to spend $3 billion on land and water conservation projects between now and 2030. Among those projects will be planting two billion additional trees.

The promise was met with some eye rolls as different parties kept upping the ante on tree planting, including the Green party's pledge to plant 10 billion trees by 2050.

But a government official in Environment Minister Jonathan Wilkinson's office said negotiations are underway with New Brunswick and other provinces to get new tree planting programs started as early as possible next year.

Ottawa doesn't intend to plant the trees itself, but will provide money to help others do it.

Dave Sawyer, an environmental economist with the Smart Prosperity Institute, said "two billion is a good start" when it comes to using nature to help Canada cut greenhouse gas emissions.

A study Sawyer helped write found that planting two billion trees is possible and helpful as trees are one of the best natural ways to absorb some of the greenhouse gases produced from burning fossil fuels.

The study suggests planting that many new trees could reduce emissions between two and four million tonnes a year in 2030. By 2050, as the trees mature and can absorb more carbon dioxide, that amount could more than double to between four and almost nine million tonnes a year.

The cost to plant those trees per tonne of emissions reduced would between $16 and $36, the study says, which is noticeably less than the $50 a tonne carbon tax that will be in place by 2022.

The investment would drive economic activity by paying people — usually young people — to plant the trees as well as work for local nurseries to grow the saplings, Sawyer said.

Even at four million tonnes a year by 2030, the impact on Canada's emissions would not be huge. Canada is currently aiming to cut emissions from 716 million tonnes in 2017 (the most recent year for which data is available) to no more than 511 million tonnes by 2030. It's a target that will get tougher next year when Wilkinson increases Canada's target.

"It's not the panacea to solve Canada's problem," Sawyer said. "But clearly there is something here and we can actually get a lot of carbon and a lot co-benefits, environmental benefits, local economic development benefits."

A few recent studies have shown benefits to starting a global effort to plant new trees, a plan backed by Swedish teenager and climate change campaigner Greta Thunberg. American clean-tech leader Elon Musk is among those putting up some money to kickstart efforts.

Some critics have suggested there is not space on the planet to put all the new trees suggested, but Sawyer said Canada does have room for two billion new trees.

While the study took into account the expectation that not every new tree planted would survive, he said where they get planted and ensuring a variety of tree types are included will be key to making the most of the efforts.

Canada has had tremendous losses of trees from pest infestations partly because urban and rural forestation efforts have in the past focused on one tree types. That meant the pine beetle had a devastating impact in British Columbia, for example, as the emerald ash borer has had in some cities in central and eastern Canada.

City of Victoria to plant 5,000 trees

By The Canadian Press | News, Politics | September 22nd 2019
Reports from the Race to a Safer World

A good idea -- but wouldn't

A good idea -- but wouldn't it be simpler and more effective to preserve 2 billion mature trees that would otherwise be cut? Furthermore, trees are not a forest; a forest is a complex living community. Preserving that community would be far better than creating vast plantations of new trees. Or -- best of all -- why not do both?

My guess is that it is

My guess is that it is essentially a plan to support the lumber and pulp&paper industries. As Mr. Cameron says, trees are not a forest. Most (?) of the trees planted currently are single species plantations, planted for future harvesting. I assume that as the Amazon, Congo, and Indonesian forests are destroyed, there will be an increase in the demand for wood and paper products, so the Canadian government sees this as an economic interest that should be promoted for the industry. I suppose there will be some limited and temporary contribution to the fight against climate change but I'm far from convinced that this is the answer. We have to convert from using fossil fuels but it might be too late now, anyway.