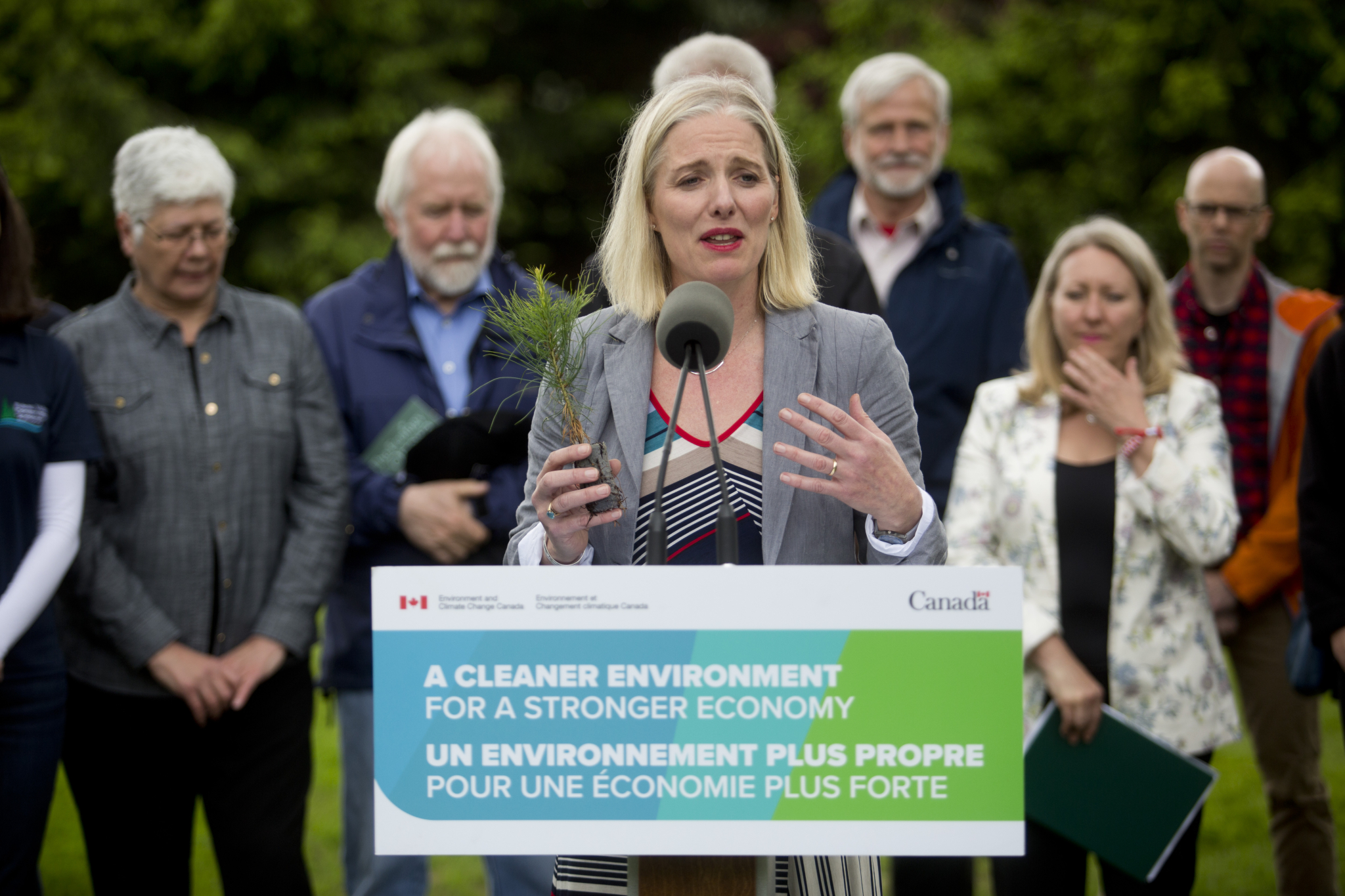 Federal Environment Minister Catherine McKenna makes an announcement to replace the funding for the 50 Million Tree program cancelled by the Ontario government at the Dominion Arboretum in Ottawa on June 5, 2019. Photo by Andrew Meade
Previous story
Next story

The Trudeau government is throwing a "lifeline" to save Ontario's 50 Million Tree Program, almost two months after Premier Doug Ford's government tried to axe it in its first provincial budget.

The federal Liberal government is providing $15 million over four years to rescue the program, which is the first Ontario-based environmental initiative to be funded through the Low Carbon Economy Fund. The fund had earmarked $420 million for the province to provide to energy efficiency programs and other measures to reduce greenhouse gas emissions.

When the Ford government cancelled the province's cap and trade system, the federal government took back the $420 million slush fund and said they would distribute it directly to cities, hospitals, universities, schools, and businesses for emissions-reduction efforts.

"Canadians are feeling the impacts of climate change; they expect their governments to act. Doug Ford’s “cut first, think later” approach isn’t working for Ontario, and it won’t work for Andrew Scheer," McKenna said in a statement. "While Mr. Ford cuts programs that support tree planting, forest firefighting, flood management, and tackling climate change, we will continue to invest in a clean future for our environment, our economy, and our kids."

Keeping forests healthy is one of the best ways to fight climate change and absorb carbon pollution. The goal of planting 50 million trees across Ontario is inspiring — and I'm so happy we can support @Forests_Ontario's vision. #WorldEnvironmentDay https://t.co/eoBhyPCmkg

The 50 Million Tree Program has an annual budget of $4.7 million and had planted more than 27 million trees across the province since its inception in 2008. The program's goal was to have 50 million planted by 2025, and has involved 13,000 landowners and produced over 15,000 hectares of new forest cover in southern Ontario. The program aimed to save landowners up to 90 per cent of the costs of large-scale tree planting, and in turn, help clean Ontario's air and water and protect shorelines from flooding and other impacts of the climate emergency.

But a day after Ontario's budget was delivered, Forests Ontario, the non-profit group that oversees the program, was told in an email from the government that funding for it was being eliminated.

The announcement threatened to destroy 7.5-million tree saplings (a three-year supply) at various stages of growth that weren't yet ready for planting.

Rob Keen, CEO of Forests Ontario, told National Observer the federal investment, which was officially announced on World Environment Day at an Ottawa nursery, was "fantastic."

"My biggest worry was if we didn't have (funding) to keep the program going. That the system that kept the supply chain intact would fall apart, and we wouldn't be able to put it back together," Keen said.

With this investment, Forests Ontario can continue to plant trees and keep the system in place that includes everything from collecting seeds to growing stock, planting it and following up.

Keen said the over 300 full-time seasonal jobs that were at risk from the Ford government's budget cut to the program will be safe now. "We will have a smooth transition towards planting tress next year," he said. "My anticipation is that no jobs will be lost."

'If private enterprise is ready to fill a gap, is that not preferable...?'

The 50 Million Tree Program is not the first tree-planting program that has seen federal investment through the Low Carbon Economy Fund. The federal Liberal government has provided $1 million to plant 120 hectares of forest in the Northwest Territories, and given $140 million to British Columbia's Forest Carbon Initiative, which is restoring up to 300,000 hectares of forests impacted by the mountain pine beetle infestation and wildfires. The Low Carbon Economy Fund has also given $10 million to help restore forests affected by wildfires in Alberta, and has provided over $50 million over five years for reforestation in Quebec.

​​​​​Wednesday's announcement comes less than five months from a federal election in which Ontario votes could have significant impact.

“I think that that’s pretty obvious that the federal government wants to campaign against us in this federal election,” Ontario Natural Resources and Forestry Minister John Yakabuski told reporters at Queen's Park. “It’s not the first time they’ve done it.”

Yakabuski said private investors had stepped up in the wake of the cancellation with offers to fund the program, but refused to say how much money was on the table. He said the government had "taken the responsible action and redirected our funding to the priorities that matter to Ontarians."

“If private enterprise is ready to fill a gap, is that not preferable to the government putting taxpayers’ money into planting trees on private property, when private industry is willing to do it?” he said. "I think that's a win for the people of Ontario."

But opposition members said the government's rationale was a cop-out from its responsibilities to address the climate crisis.

(Some members of the former Harper government, which cancelled funding for the ELA, including Energy Minister Greg Rickford, are now part of the Ford government in Ontario that is maintaining provincial funding for the research facility.)

"I'm happy the federal government is stepping in where the provincial government is cancelling funding for the tree program," Schreiner said in an interview. "I think its a good news story on World Environment Day."

Meantime, Schreiner said he has seen no evidence of private enterprise investment in his meeting with Forests Ontario, who credited his advocacy efforts for leading to the federal announcement Monday. "The government doesn't seem to be able to provide any numbers," Schreiner said, "and until they can provide some facts to verify what they're saying, I would say they are misleading people."

I'm happy that the federal government has stepped in to support @Forests_Ontario 50 Million Tree Program. Trees help in the fight against the climate crisis, prevent erosion and help mitigate flooding. Good news on #WorldEnvironmentDay #onpoli https://t.co/6dmRsdBpwH

Liberal MPP Nathalie Des Rosiers said it was "a relief" to see the tree-planting program being saved. "The environment is a joint jurisdiction," she said, "and I am sad the provincial government isn't paying for its own share."

A spokeswoman for Yakabuski repeated Wednesday that the tree-planting program was cut because it wasn't meeting its targets effectively: it had only planted 27 million trees since 2007, short of its initial goal of 50 million trees by 2020.

But Keen said the Ford government keeps referencing the 68 million tress that the forest industry plants, and are required to do so by law. Under the Crown Sustainability Act, Ontario's forestry sector is legally required to regenerate the land they harvest. This is reforestation.

The 50 Million Tree Program is different, and focuses on afforestation — increasing forest cover, or creating new forests. About 40 per cent forest cover is needed to ensure forest sustainability; the average right now in southern Ontario is 26 per cent, with some areas as low as five per cent.

Whereas the forestry sector is mostly located in northern Ontario, the majority of the land in southern Ontario is owned by individuals. "We have to create incentives or reduce barriers for landowners to plant tress on their property," Keen said.

We’re committed to balancing Ontario’s budget to protect critical services. There has been interest from the private sector to cover the costs of this program of planting trees on private property. Let’s not forget the previous Liberal government left us with a massive debt. pic.twitter.com/kdwEi5Ev4a

Forests Ontario has made a commitment to augment the government’s contributions, through their own fundraising efforts, to support tree planting into the future, Keen said.

"We can’t depend on government for all of our funding," he said. The federal government investment allows the non-profit to start reaching out to corporate industry and enhancing their donation program.

"Its incumbent on everybody to contribute," Keen said. "If every Ontarian donated one dollar, we’d have enough money to plant for three years. If they gave $2, we'd be set for six years. That’s the kind of support we need to get a bigger program going and plant a billion trees down the road."

Good on the Liberals.

Good on the Liberals.