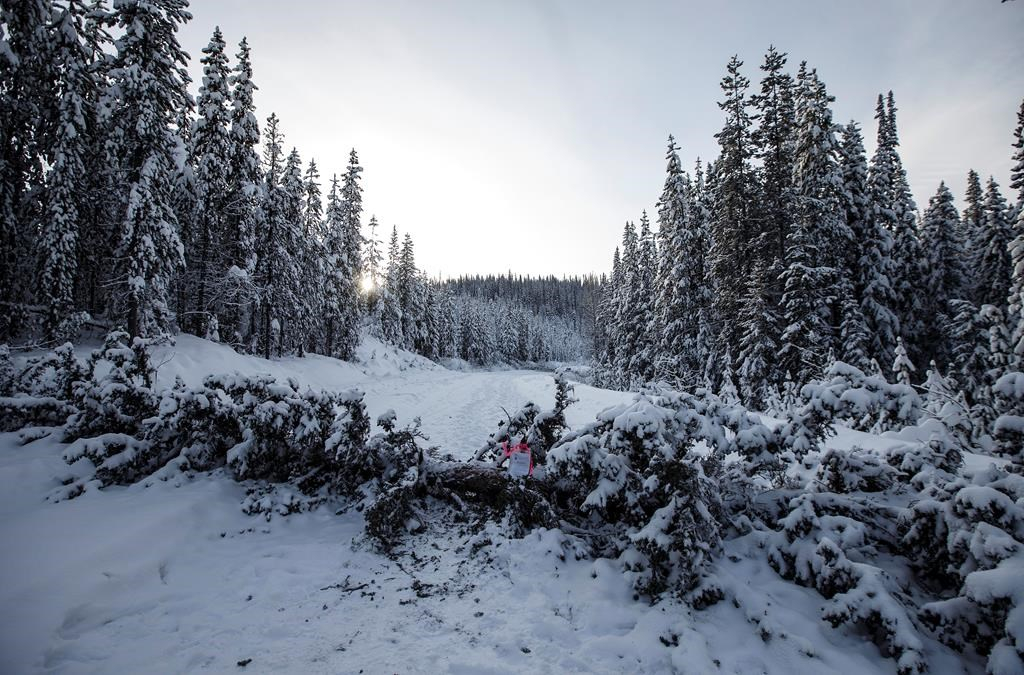 Trees fell across the road block access to Gidimt'en checkpoint near Houston B.C., on Wednesday, January 8, 2020. Photo by The Canadian Press/Jason Franson
Previous story
Next story

Cody Merriman, who is 'Namgis and also goes by the name Mona'gila, says that as supporters of the Wet'suwet'en hereditary chiefs, they are there to ensure an eviction notice issued by the chiefs to Coastal GasLink over a pipeline it is building is respected.

"They made a decision and we're here to support them in that, to make sure Wet'suwet'en law is enacted and respected," he said.

They're also eyes on the ground in case the RCMP begin to enforce an injunction granted to Coastal GasLink against the pipeline opponents, he said.

Coastal GasLink says it's committed to resolving the dispute through negotiation as long as that is an option, although the hereditary chiefs say they will only meet with provincial and federal government leaders.

The company posted an injunction order online Tuesday, and a copy is pinned to a tree that was felled across the logging road by the Wet'suwet'en, blocking the RCMP and the company from access to the work site.

The RCMP said trees along the Morice West Forest Service Road are a safety hazard because some were partly cut and the wind could cause them to fall without warning.

Officers also found stacked tires covered in tarps and trees with jugs of gasoline, diesel, oil and kindling underneath. The Mounties have started an investigation under the Criminal Code for traps likely to cause bodily harm, they said.

"We want to emphasize that we are impartial in this dispute and our priority is to facilitate a dialogue between the various stakeholders involved," the Mounties said Wednesday. "We remain hopeful that these efforts will result in a resolution."

“Our primary concern is the safety of all users of this public forestry road, including those who wish to protest our activities. Unlawful actions that put people at risk for serious harm are dangerous, reckless and unacceptable, and do not reflect peaceful protest,” he said.

Company spokeswoman Suzanne Wilton said Wednesday that posting the order, which gives the defendant 72-hours to clear the way before the company is authorized to remove any barriers along the road, was a procedural court requirement.

"This does not indicate a request for enforcement whatsoever. As we have stated, we believe that dialogue is preferable to confrontation while engagement and a negotiated resolution remain possible," she said in an email Wednesday.

There was already an enforcement order in place prior to the new posting, she said.

The 670-kilometre pipeline is expected to transport natural gas from northeastern British Columbia to LNG Canada's export terminal in Kitimat on the coast.

It has provincial approval and while the hereditary chiefs say it has no authority without their consent, the company has signed agreements with all 20 elected First Nation councils along the route.

Merriman was part of a group last year that set up an encampment at the 44-kilometre mark on the road where the RCMP enforced a previous injunction granted to Coastal GasLink.

He was there until he saw RCMP officers coming down the road and then he left. His partner Molly Wickham was there too and the couple, who have two children, couldn't risk two arrests, he said.

Wickham, who is a spokeswoman for the Gidimt'en, which is one of five Wet'suwet'en clans, was among 14 people arrested Jan. 7, 2019.

"People say what we're doing is unlawful but this is for our kids, it's for these beautiful spaces out here," he said.

"Last year, to walk away from it was the toughest thing I ever did."

The fight over territory and land has been going on for hundreds of years, he said, and the process for resolving disputes has to change.

"Unfortunately it's that time again and I don't see this fight going away any time soon," he said.

Note to readers: With LNG-Pipeline-Legal