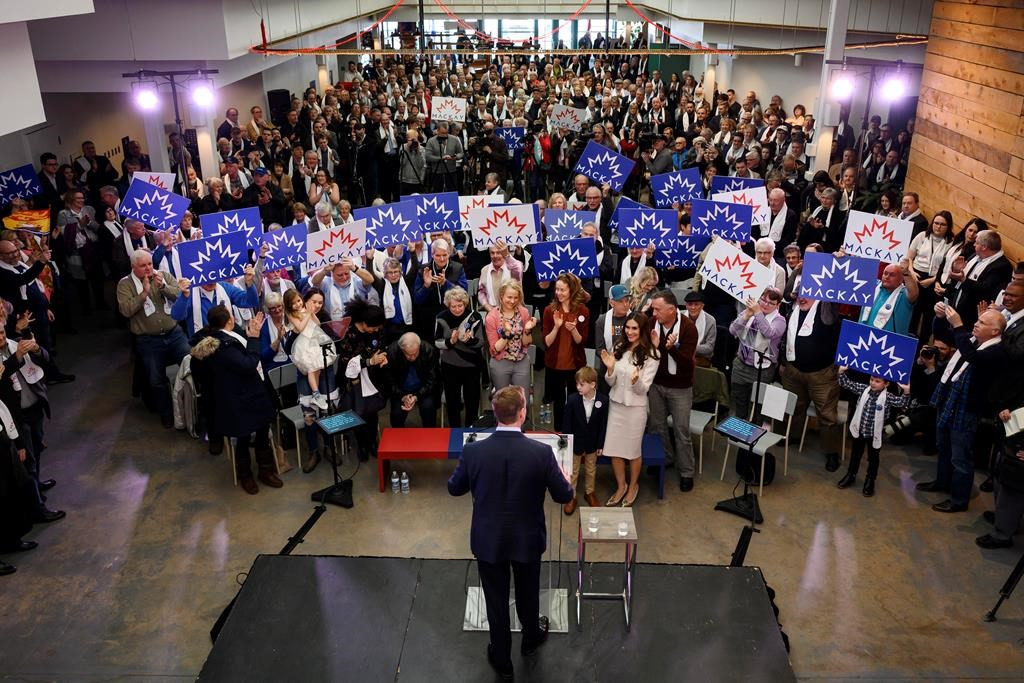 Peter MacKay speaks to a crowd of supporters during an event to officially launch his campaign for leader of the Conservative Party of Canada in Stellarton, N.S. on Saturday, January 25, 2020. Photo by The Canadian Press/Darren Calabrese
Previous story
Next story

After a more than four-year hiatus from politics, former cabinet minister Peter MacKay officially launched his bid to capture the leadership of the federal Conservative party before an enthusiastic hometown crowd in Nova Scotia.

MacKay made the announcement at the Museum of Industry in Stellarton, N.S., in front of a large Canadian flag and before more than 200 supporters bearing signs with his name.

He said he is running because the current Liberal government is making the lives of Canadians harder and he doesn't want to stand by and hope someone else can get the job done.

"I am here to stand up and do my part to help unite this country, to put shoulder to the wheel and with others to help build a better life for all of us,'' MacKay told the gathering.

In a 23-minute long speech, MacKay touted his experience as a former defence minister and stressed the need for leadership that will assert Canada's place in the world.

He also took a swipe at Prime Minister Justin Trudeau.

"Leadership on the world stage, serious diplomacy to advance Canada's interest requires authenticity of actions, measured by outcomes, not selfies or photo-ops. Canadians have had enough of posturing that produces no results.''

He stepped away from politics ahead of the 2015 election, the year the Harper Tories lost power and Harper himself resigned as leader.

MacKay addressed the need for party unity and highlighted his past role in its creation.

"I have played my part in uniting the conservative family into one big tent,'' he said. "All conservatives belong in this party and have a voice and a place at the table.''

"I am here to speak to you of hope. Of the hope of electing a national government that shares your Quebec values, respects your jurisdiction, and is proud of Quebec's place as a nation in Canada.''

MacKay used the speech to launch an attack on the governing Liberals' record signalling that past controversies haven't been forgotten.

"The concentration of power in the PMO has interfered with justice, has failed Canadians and has empowered only those close to the PM and his cronies. The Liberals have broken Canadians trust, and let's be clear, we need to earn the trust to govern with confidence for all Canadians.''

Many of those MPs have already thrown their support behind MacKay, and he's expected in the capital for a campaign event on Sunday.

Scheer became leader of the party in 2017, beating out 14 other candidates. He will step down in June once the next leader is elected, a decision he announced in December.

He said he looks forward to watching the race unfold.

MacKay did not speak to reporters following the speech, leaving it to others to bolster his candidacy.

His father, former longtime Central Nova MP Elmer MacKay, said his son will bring strengths to the party when it comes to the national unity front.

"I think too often this country has been unbalanced because of the historical dominance of the centre, Quebec and Ontario,'' he said. "I think Peter like (Brian) Mulroney has a better sense of nation-wide development.''

Former Newfoundland and Labrador premier Kathy Dunderdale said the time is right for MacKay to run because of the varied experience he would bring to the job. Dunderdale said she even sees his time away from politics as an asset.

"He's . . . had the experience of being in the private sector and being focused on raising his family, so it brings a whole new dimension on what he brings to the table.''

MacKay is the first high profile Tory to announce for the leadership after Jean Charest, Rona Ambrose and Pierre Poilievre announced they wouldn't be running.

Current MP Erin O'Toole is expected to launch his bid on Monday.

He released a pre-launch video on Saturday entitled ``Let's go'' showing a smiling O'Toole driving to work. O'Toole doesn't speak in the video, which simply ends with his announcement date 01-27-2020.

This report by The Canadian Press was first published Jan. 25, 2020.