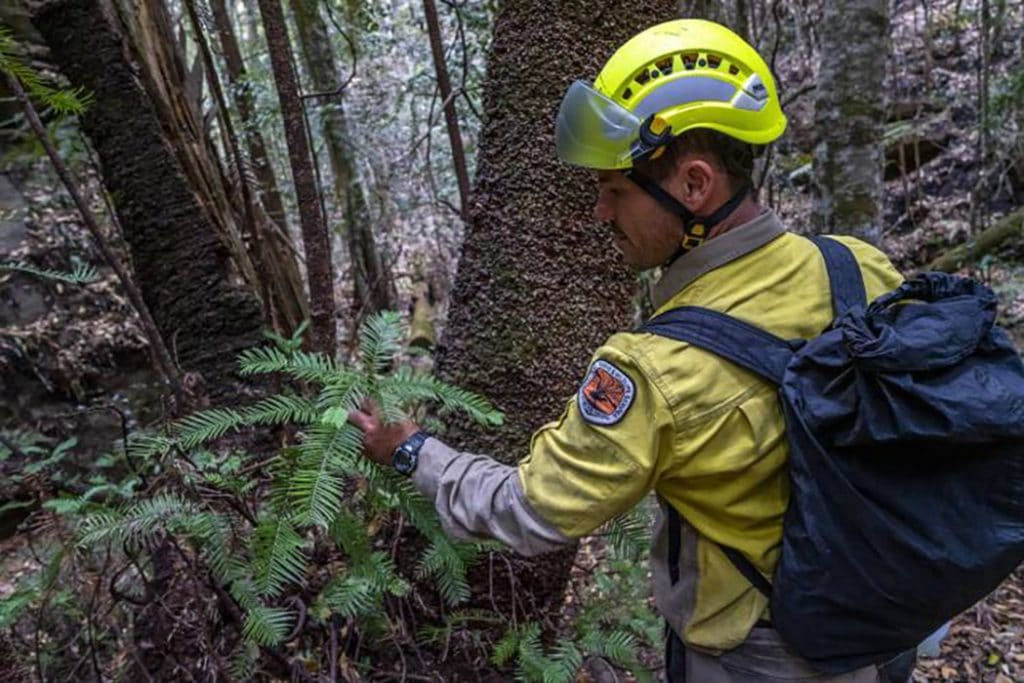 In this photo taken in early January, 2020, by the NSW National Parks and Wildlife Service, a firefighter inspects a Wollemi Pine that was saved from the wildfires that razed 90 percent of a nature preserve west of Sydney.
Previous story
Next story

This story was originally published by Bulletin of the Atomic Scientists and appears here as part of the Climate Desk collaboration.

According to an Associated Press story last week titled Firefighters in Australia save unique prehistoric trees: “Firefighters winched from helicopters to reach the cluster of fewer than 200 Wollemi Pines in a remote gorge in the Blue Mountains a week before a massive wildfire bore down… the firefighters set up an irrigation system to keep the so-called dinosaur trees moist, and pumped water daily from the gorge as the blaze that had burned out of control for two months edged closer.”

This news had particular significance to me for a number of reasons. For one thing, the successful protection of this endangered species could hint of things to come—if we play our cards right.

For another, I know the Blue Mountains of New South Wales. (Though I have not been to that grove of trees—whose exact location has been kept a secret by botanists ever since the grove was first discovered in 1994.)

I spent four years down-under, first as an American researcher on a Fulbright grant to see what we in the States could learn from looking at the Australian experience, and then as a roving foreign correspondent for science-related US magazines such as International Wildlife, Scientific American, and the journal Science, among others. My job was to travel over the land down-under, reporting on natural history, the environment, and science in the Great South Land for publications back home in the States—as well as magazines like Australian Geographic.

Which was how I became acquainted with the Blue Mountains, a lesser-known area about 120 miles west of Sydney. They’re a surprisingly steep, thickly wooded, and easily overlooked mountain chain, much like an Aussie version of our Appalachians. And much like the Appalachians, their deep ravines held up westward exploration and expansion for a long time.

But there the parallels end.

Walking in Australia’s Blue Mountains is an unworldly experience. There are no squirrels or chipmunks; instead, parrots occupy that ecological niche. My edition of the Field Guide to the Birds of Australia lists 23 different species of parrots alone. Just a short list of the formal names of some of the individual species gives an idea of the colorful diversity you can see: Blue-winged, Orange-bellied, Golden-shouldered, Scarlet-chested, Red-rumped, and Turquoise parrots. Not to mention Elegant, Paradise, Superb, and King parrots.

And instead of smelling pine trees, your nose registers the scent of eucalypts. Look up at the stars at night, and there’s not a single familiar constellation; instead you see celestial objects like the “Jewel Box Cluster”—while hearing the mocking laugh of kookaburras. Even the food tastes different—in place of pepperoni or sausage, toppings at the Australian Pizza Kitchen in Canberra include emu and kangaroo. (I prefer the kangaroo.)

And some of the trees in parts of the Blueys—as they’re called—resemble nothing so much as short stumps with ferns popping out of their sides willy-nilly; everything looks so primeval you half-expect to see escapees from Jurassic Park poking their snouts out. Indeed, in far-north Queensland I and my parents were to be stalked by a full-grown, adult male cassowary, defending his mate. We took shelter behind a large tropical tree, trying to keep the trunk between us and the approximately 200-pound, 6-foot-tall creature as it circled around.

This pervasive feeling of encounters with the primeval is appropriate. Australia is a very ancient land, which used to be part of what geologists call “Gondwana”—when most of the world’s landmasses were linked together in the distant past. But while the other landforms went on to become continents such as South America and Africa, Australia remained a giant island continent, cut off from the rest of the planet. And species that died out elsewhere continued to thrive, and evolve, here. (Just why species do so well on islands, and why evolution seems to speed up on them, is something that kept Charles Darwin busy. An entire field of “island biogeography” has sprung up to delve into its mysteries.)

Even now, some parts of Australia are so isolated that the wildlife has seldom seen humans. So far as researchers can tell, no Aborigines, Melanesians, Micronesians, Polynesians, or Caucasians ever settled on Australia’s Lord Howe Island until 1834; consequently, the wildlife never learned to be afraid of humans. When I went there, you could stand at the foot of Lord Howe’s tallest mountain, call up to the Providence Petrels nesting as much as a hundred feet above, and watch the birds glide down to land at your feet. If you’re really good, you may be able to touch them, or at least have one land on your outstretched arm.

Due to these vagaries of isolation, ancient and unique species seem to abound in Australia—though they can be easily overlooked. Drive along the highway outside Shark Bay in the state of Western Australia, and you’ll spot weird dark, mushroom-shaped, rock-like structures in the shallows of the hyper-salty water; they’re actually living mats of blue-green algae known as stromatolites—Greek for “layered rock.” Stromatolites are one of the oldest forms of life that we know of, essentially unchanged since their ancestors flourished 3.5 billion years ago. They were previously only known to us from fossils, until first discovered in this region in the 1980s.

So, it’s not entirely surprising that Wollemi Pines should survive in the wild, undetected, a relatively short drive from Sydney for so many years; after all, these trees are descendants of individuals that had survived since the era of the dinosaurs—though they now only exist in the wild in one place in the world, with less than 100 adult specimens known.

What was surprising was that these wild specimens were saved from the wildfires, in a complex operation that involved firefighters being lowered from helicopters into the narrow steep-sided ridges where the trees dwell, along with planes strategically bombing the advancing firefront with fire retardant.

And well in advance of events these past months, authorities had covered their bets by doing all they could to increase the species’ chance of survival. Since 2006, a propagation program has made these trees available to botanical gardens so their numbers could be increased; I’ve subsequently run across Aussies who have grown these plants from seeds in their living rooms. (In Australia, seedlings can even be ordered online, and the Royal Botanic Gardens Sydney offers information on Wollemi care, conservation, and research.)

More than that, when it looked like the wildfires were in imminent danger of destroying the only existing stand of these trees in the wild, leaders had the foresight to rely on the recommendations of scientists, firefighters, and other experts as to how to proceed. They then worked out a plan and put it into action—actively dealing with the problem rather than denying it existed. In short, in the time since the Wollemi Pines were discovered, government agencies, nonprofit organizations, private enterprise, and volunteer efforts successfully worked together over decades to protect the Wollemi Pines from extinction.

Which makes one wonder, once again, what we in the States could learn from observing the Australian experience.