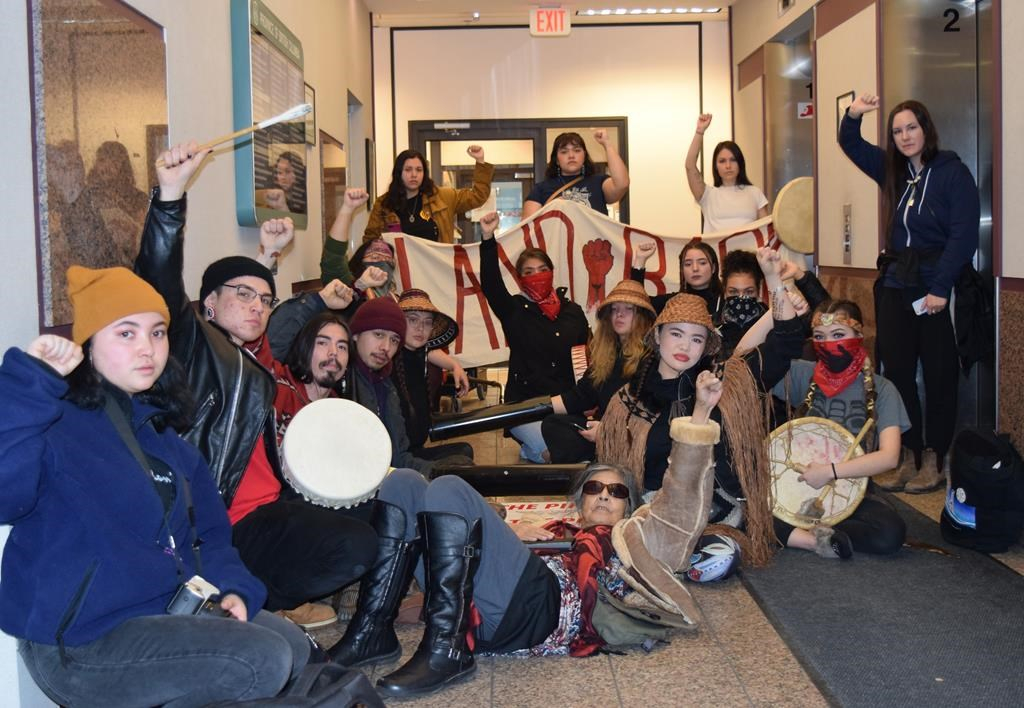 Indigenous young people occupy the B.C. Energy and Mines Ministry office in Victoria on Jan. 21, 2020, in solidarity with Wet'suwet'en hereditary chiefs who have opposed the Coastal GasLink pipeline in northern B.C. Handout photo by Ta'Kaiya Blaney
Previous story
Next story

British Columbia's police complaints commissioner says it has received several complaints about use of force by Victoria police during the arrests of young Indigenous protesters inside a cabinet minister's office.

Ta'Kaiya Blaney says she was one of 13 people arrested on Jan. 22 while occupying the energy and mines minister's office to support Wet'suwet'en hereditary chiefs who oppose the Coastal GasLink pipeline in northern B.C.

Blaney said she witnessed one person suffer a swollen arm and hand after it was pulled by an officer from a lockbox used as a protest device, while fellow protester Aya Clappis says she saw blood on the ground outside and was told a supporter had a gash under his eye.

Neither Clappis nor Blaney personally saw the man described as having the gash, and he did not immediately return a request for comment, while the protester with the alleged arm injury declined an interview request.

Victoria police said last week there were no injuries, but Chief Const. Del Manak said Wednesday that one protester may have suffered facial injuries during the arrests.

Manak said police initially reported no injuries because the individual refused medical assistance while being processed in jail, but police have now learned he might have sought help on his own after being released.

"In this particular case, it was not obvious that this individual needed medical attention, which is why the officers asked," he said. "We take people at their word."

He said he doesn't know whether the protester was the same man who Clappis described as having a gash under his eye. But Manak said it was not a serious injury like the one she described.

Manak also said protesters poured fake blood outside the building as a symbolic act and there was no real blood on the ground.

Another person was transported to hospital from jail because of a medical issue unrelated to the arrests, he said.

The police chief added that he isn't aware of any allegation by a protester of suffering a swollen arm when it was removed from a lockbox.

Officers gave all the protesters, who had been there upwards of 15 hours, ample opportunity to leave peacefully, he said, adding the arrests took over four hours.

"It really shows the care, professionalism and restraint that the police officers showed in making sure that they were treating people with dignity and respect," Manak said.

He said officers had to carry protesters from the building to waiting police vehicles, while additional protesters outside tried to impede the arrests by pushing and shoving officers.

"They were subjected to a tremendous amount of insults, verbal and physical abuse while they were carrying out their lawful execution of their duties," he said.

All the protesters who were arrested were over 18 and one was 66 years old, he said.

Andrea Spindler, the deputy police complaint commissioner, said her office has received several complaints from people present at the protest. The office is contacting complainants for further information and has yet to decide on next steps, she said.

"Any investigation that happens relating to this incident will be investigated with rigorous civilian oversight by the Office of the Police Complaint Commissioner," she said.

Blaney, who is 18 and a member of the Tla'amin Nation in southwest B.C., said the purpose of the occupation was to demand the minister's office pressure Premier John Horgan to meet face-to-face with Wet'suwet'en hereditary chiefs, who have requested a meeting.

Coastal GasLink has signed benefits agreements with all 20 elected First Nations councils along the pipeline route but the hereditary chiefs say the project can't proceed without their consent.

The police use of force was "unnecessary," Blaney said.

"It's about treating our youth with dignity. That's not the treatment that we received."

Don Tom, vice-president of the Union of B.C. Indian Chiefs, says in a statement that the police response is "concerning" given the over-representation of Indigenous people in the justice system.

"We continue to call for peace and non-violence."