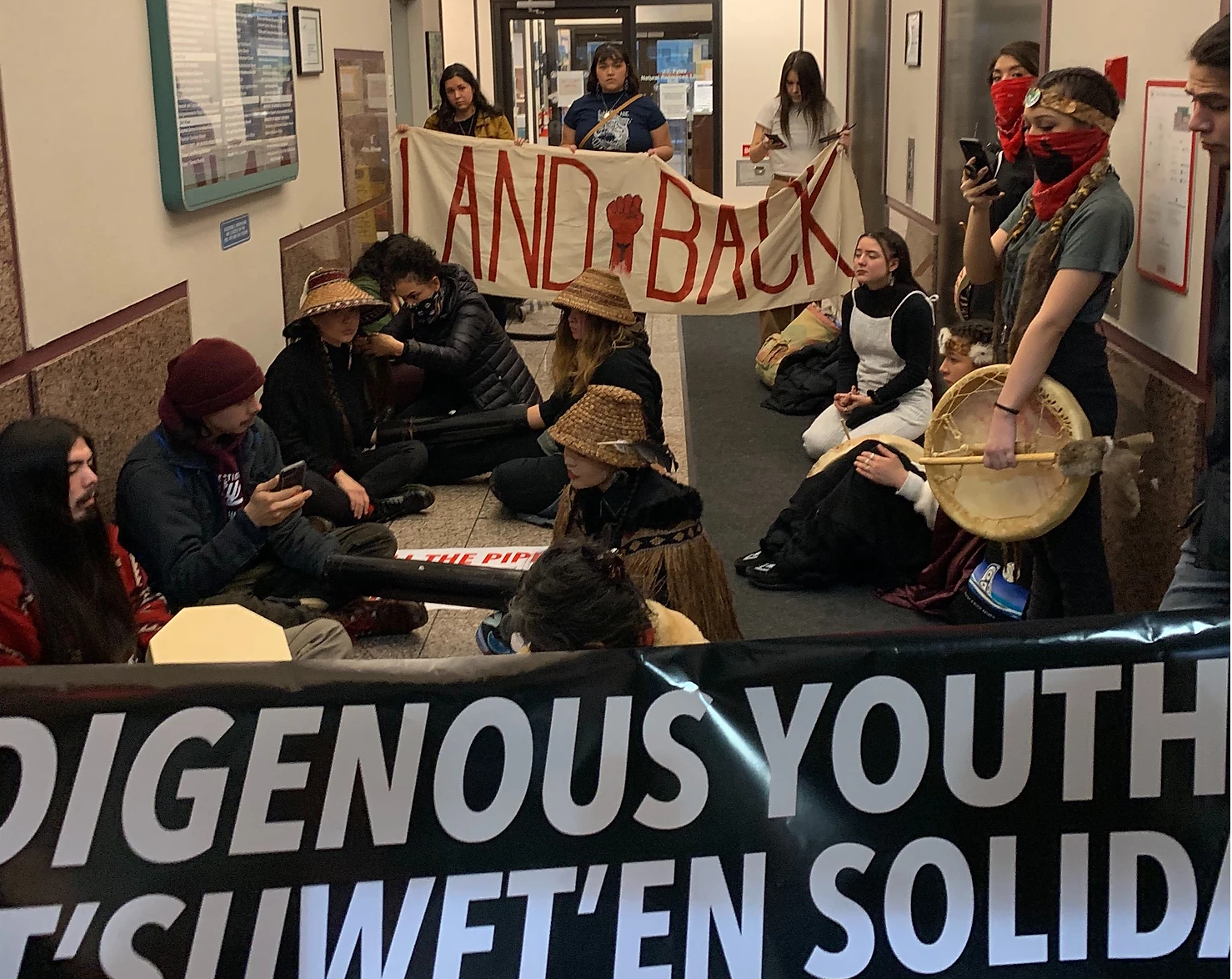 Protestors occupy the looby of the B.C. Energy Ministry in Victoria on Jan. 21, 2020. Photo courtesy of Indigenous Climate Action
Previous story
Next story

Victoria police arrested 12 people early Wednesday after they locked themselves together inside the offices of British Columbia's energy ministry.

The demonstration was part of a growing protest movement against the Coastal GasLink pipeline and in support of the hereditary chiefs of the Wet’suwet’en First Nation. They have not agreed to the proposed pipeline travelling through their unceded territory.

“Despite numerous efforts over 15 hours to resolve the situation without arrests, officers were requested to remove the protesters by the building owner once negotiations failed,” Victoria Police said in a statement. “Officers acted under the lawful authority of the Trespass Act to effect these arrests.”

Those arrested, from a string of First Nations, were released later in the morning without charge and later spoke at another rally outside the ministry.

“We are not trespassing,” Ta'Kaiya Blaney, one of those arrested and released, told dozens of supporters in a video posted on Facebook. “Coastal GasLink is trespassing, those cops are trespassing. They have no jurisdiction to violate Indigenous peoples and Indigenous youth on stolen land.”

Coastal GasLink, owned by the company formerly known as TransCanada Corp (now TC Energy), is aiming to build a natural gas pipeline travelling from the Dawson Creek area to the $40 billion LNG Canada facility currently under construction near Kitimat.

The company has signed agreements with all 20 elected First Nation councils along its path, including five Wet’suwet’en councils, but the hereditary clan chiefs who are leaders under the traditional form of governance say the project has no authority without their consent.

Wet’suwet’en hereditary chiefs were among the appellants in the 1997 Delgamuukw case, in which the Supreme Court of Canada found treaty rights could not be extinguished, confirmed the legitimacy of oral testimony, and said Indigenous title rights included the right to extract resources from the land.

The standoff cooled down last year after hereditary chiefs, concerned about safety after the raid, reached an agreement with Coastal Gaslink to to allow the company into the territory for pre-construction work. But tensions remained and have been rising again since Dec. 31, when a B.C Supreme Court judge extended an injunction to force out the Wet’suwet’en in the camps and allow construction on the pipeline to continue.

“We are not trespassing,” said Ta'Kaiya Blaney, one of those arrested in Victoria. “Coastal GasLink is trespassing, those cops are trespassing. They have no jurisdiction to violate Indigenous peoples and Indigenous youth on stolen land.”

The protest group began their occupation of the ministry building at 11 a.m. local time on Tuesday, but were unsuccessful in getting Michelle Mungal, the provincial minister of energy, mines and petroleum resources, to meet with them, according to a statement released by Indigenous Climate Action. It said police began arresting members of the group at 5 a.m.

They had planned to pass her an open letter demanding that the province suspend permits and cease construction of the project; respect the right of indigenous communities to free, prior and informed consent; withdraw the RCMP from Wet’suwet’en lands; and for all parties to respect the community’s law and governance system.

A spokesperson for the energy ministry said they respect the right of people to engage in peaceful protest, but did not indicate plans to change course on the project.

“Our government is committed to working in partnership with First Nations to meaningfully advance reconciliation in B.C.,” Kent Karemaker wrote in an emailed response to questions. “With regard to the Coastal GasLink project, B.C. conducted extensive consultations with Indigenous Nations and has also signed agreements with the vast majority of Indigenous communities along the route.”

While the provincial NDP government has thrown its support behind the massive LNG project that the Coastal Gaslink pipeline will feed, it has at the same time mounted a losing legal fight against the Trans Mountain pipeline expansion.

Karemaker said that Scott Fraser, the provincial minister for Indigenous relations and reconciliation, was travelling to Smithers today to meet with Wet’suwet’en hereditary chiefs, a move proposed by Premier John Horgan.

The police statement said that officers used a minimum of force when making the arrests, which happened over a four-hour period. It said officers were pushed and shoved by other protestors who had gathered outside the ministry while carrying those arrested to police vehicles. One of the protestors outside the building was among those taken into custody.

With files from Emma McIntosh and Emilee Gilpin

BC Premier 'disrespectful' for not meeting Wet'suwet'en hereditary chiefs