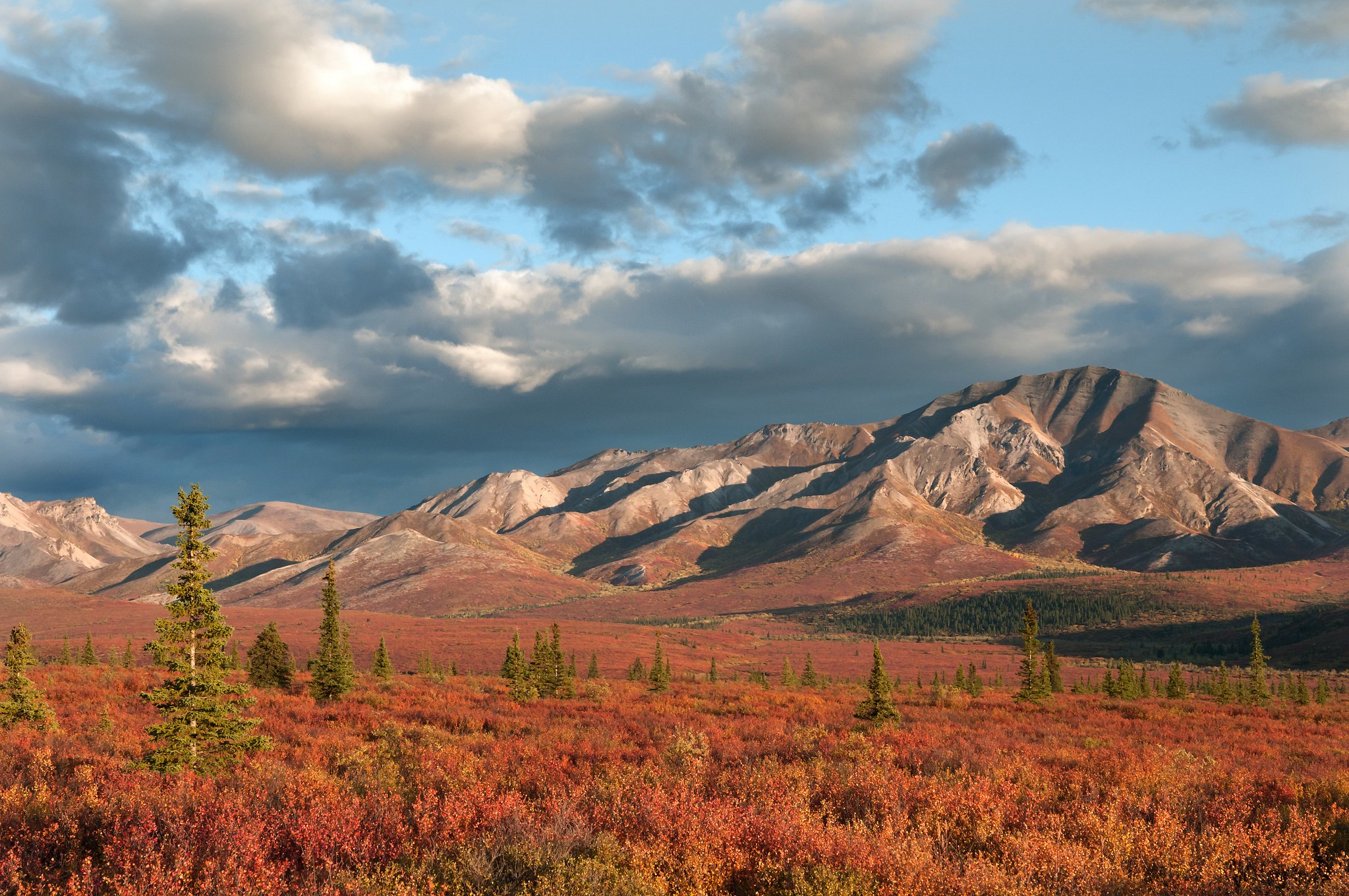 Each fall, much of Denali’s landscape blushes red as the leaves of dwarf birch, a common tall shrub, change colors before falling off for the winter months. Flickr/Sandy Brown Jensen (CC BY-SA 2.0)
Previous story
Next story

Across the warming globe, a mass exodus of tens of thousands of species is transforming the distribution of biodiversity — and challenging fundamental tenets in conservation policy and science. Are policymakers, land managers, and conservationists prepared?

In recent years, scientists have documented countless species shifting their ranges toward the poles, higher into the mountains, and deeper into the seas in response to the changing climate. Deciduous shrubs of willow, birch, and alder have spread into the low Arctic tundra. Brightly colored tropical parrotfish and rabbitfish have arrived in the temperate kelp forests of the eastern Mediterranean. Elkhorn corals from the Caribbean now sprout in thickets off the coast of Galveston, Texas.

The trend is expected to continue as the climate crisis deepens, with species that societies rely upon for a wide range of economic, cultural, and recreational value shifting their ranges to survive. “The entire trajectory of natural capital, from aesthetic to economic,” says University of Florida wildlife ecologist Brett Scheffers, “is going to be moving.”

The coming exodus, Scheffers and other scientists say, will require a transformation in the way we think about wildlife management and conservation — and a reevaluation of the traditional native-alien dichotomy that has governed it. For decades, conservation biology has characterized the movement of species into new habitats as potential invasions of alien species with the capacity to threaten local ecosystems and already resident species, leading to the formulation of policies to reflexively repel the newcomers. This approach, and its underlying classification of wild species as either “native” (and thus worthy of protections) or “alien” (and thus likely not) has been the subject of growing controversy in recent years.

Climate-driven range shifts are “one of the only solutions for species to adapt,” notes one ecologist.

Critics such as author Emma Marris and Macalester College biologist Mark Davis, among others, have pointed out that only a small subset of “alien” species wreak damage on already resident species, and that the categorization of wild creatures as either “native” or “alien” obscures as much as it elucidates. Indeed, the influential, albeit contested “tens rule” in invasion biology, validated in a range of species and locales, holds that only 10 percent of alien species establish themselves in new habitats and only 10 percent of those are likely to cause unwanted harm to economies, ecosystems, or human health.

Now, a growing number of scientists say that conservation policies based on the native-alien dichotomy could actually threaten biodiversity. Today’s climate-driven range shifts are “one of the only solutions for species to adapt to climate change,” says ecologist Nathalie Pettorelli, who studies the impact of global environmental changes on biodiversity at the Institute of Zoology in London. Ensuring that wild species can make life-saving movements and establish self-sustaining populations in new habitats, while also protecting already-resident species, will require new ways of evaluating species — not just on their origins and historical value to society but on their ecological functions and how they can contribute to the novel ecosystems of the future.

Scheffers — along with University of Tasmania marine ecologist Gretta Pecl, who recently convened an international conference on climate-driven range shifts — has proposed an international Climate Change Redistribution Treaty that would create a transnational system to manage species shifting across geopolitical and biogeographical borders. Such a treaty could transform the conservation agenda. Populations that would not attract the attention of conservation managers working under traditional nationwide conservation systems, such as today’s healthy populations of quiver trees in South Africa, would likely be deemed worthy of monitoring under a transnational one, in which the quiver tree’s shrinking numbers in neighboring Namibia are taken into account. Newly arrived species that would be ignored as vagrants or condemned as unwanted aliens under traditional conservation approaches might be proactively monitored and managed so that they can establish self-sustaining populations, such as the tropical fish species arriving in the temperate waters of Tasmania, which have been protected with bag limits placed on anglers.

Another reform proposed by a group of nearly twenty experts in invasion biology calls for expanding the native-alien dichotomy. The traditional classification of species into “native” and “alien” presupposes that the “natives” are long-resident species, in contrast to “aliens” carried long distances by human trade and travel. But with thousands of species shifting their ranges in response to climate change, that distinction fails to capture the diversity of wild species’ claims to conservation protection, University of Vienna conservation biologist Franz Essl and other invasion biologists say. Essl and his colleagues have proposed a new category called “neonatives,” which would consist of species that have moved at least 100 kilometers (or a few hundred meters in altitude) beyond their historic ranges (as established in 1950), in response to environmental changes. These newcomers, like the tropical fish that have moved into temperate waters, may cause ecological disruptions similar to those caused by species traditionally defined as alien, but might at the same time require protections similar to those traditionally reserved for native species.

For some long-time critics of the native-alien paradigm in conservation, it’s the fundamental principle of evaluating species based on their origins that needs to go. “Whether because of climate or because people move them, species need to be evaluated on their own effects,” says Macalester College’s Davis, “and not on whether they are natives or new natives or non-natives or non-natives moved by humans.” Critics such as Davis essentially call for the dissolution of invasion biology and restoration biology as they’ve been traditionally defined. “I don’t see the value of keeping those distinctions,” he says.

But given the impact some alien species can have and the accelerated pace of introductions thanks to the pet industry and horticultural trade, abandoning the distinction between natives and aliens, others say, is tantamount to “denialism,” as University of Auckland conservation biologist James C. Russell put it. Alien species have exacted a dramatic toll on natives in certain locales, he says, such as the rats accidentally released on Big South Cape Island off New Zealand, which decimated land bird populations. “There is fuzziness over these terms,” he allows, with some conservationists dubbing non-native species unwanted based on their origins alone, others doing so only if non-native species displace already resident species, and still others calling for the rejection of non-native species only when the disruptions they cause outweigh their contributions to the ecosystems they join.

Species moving on their own will likely be distinguishable from alien species introduced through global trade and travel.

Other experts question whether climate-displaced species should be characterized as unwanted intruders at all. University of Tennessee biologist Daniel Simberloff and University of Delaware entomologist Doug Tallamy, for example, point out that species on the move under their own steam will likely be readily distinguishable from the disruptive alien species introduced into new habitats through global trade and travel. The difference between a tropical fish swimming into cooler waters and a rodent from India being deposited onto a remote Pacific island, Simberloff says, is “huge.” Climate-displaced species are “not species from the middle of Asia being moved into Illinois,” he says. And they are unlikely to be as ecologically disruptive as trade-dispersed alien species are, adds Tallamy, who studies how insects have evolved to specialize on the host plants they feed on.

Unlike species introduced through trade, climate-displaced species on the move will be shifting their ranges alongside other species they’ve co-evolved with, with insects shifting in sync with the plants they feed upon and vice versa. “They are moving up mountains, and moving north, slowly,” he says. “The animals that are part of those biomes can track them.”

Scheffers, Pettorelli, and others suspect otherwise. They point out that climate-displaced species may be as ecologically novel in their new habitats as trade-dispersed aliens and could be just as disruptive to ecosystems, economies, and cultures as traditionally defined alien species. Already, mackerel arriving in Iceland from Britain have led Britain to accuse Iceland of “stealing its fish.” Capelin that have left Iceland for cooler waters have devastated a $143 million fishery. The movements of iconic species such as palm trees in Florida, threatened by disease-spreading treehopper bugs that likely blew in on a hurricane, and moose in Minnesota, which may be forced northward by the state’s booming tick populations, will cause both economic and cultural losses if they collapse or shift beyond state borders. Under traditional management approaches, the movements of such species could generate counterproductive efforts to protect them as natives in places they’re leaving, or worse, repel them as aliens in places they enter.

Historically, Pecl, Scheffers, and Davis point out, conservation policies have targeted species for eradication even when they’ve shifted their ranges gradually under their own steam. Strix varia, the barred owl, extended its range westward from eastern North America thanks to a corridor of trees created by human settlements across the Great Plains. In 2015, wildlife officials launched a $5 million campaign to shoot thousands of the newcomers in the Pacific Northwest for fear of their impact on local spotted owls. Brown-headed cowbirds took similar advantage of land-use changes to expand their range beyond the Great Plains and were targeted by an array of programs aimed at trapping and killing them, Scheffers notes.

Others have been targeted even when they provide ecosystem or cultural benefits that may neutralize or outweigh their burdens on already resident species. In California, wildlife officials attempted to exterminate Spartina cordgrass, introduced to the West from the salt marshes of the Atlantic and Gulf of Mexico coasts, despite the fact that it provided foraging and nesting sites for endangered California clapper rails. Local activists have similarly targeted nearly half-a-million Tasmanian blue gum trees in the San Francisco Bay area for destruction — claiming the non-native gums are a greater fire threat than native trees, a charge that some fire experts and biologists contest. The defenders of the blue gum trees in the Bay Area argue that the trees provide valuable habitat, carbon sequestration, and shade, and that thousands of gallons of herbicides would be required to ensure their demise.

Such campaigns to repel the movement of non-native species fuel a $25 billion ecological restoration industry, enacting conservation principles established at the highest levels of policymaking. Aware of the difficulty of removing novel species once established, the United Nation’s Convention on Biological Diversity recommends early detection, prevention, and eradication of newcomers, before they start to spread — and before they’ve caused any detectable damage to resident species. When the world’s largest environmental network, the International Union for Conservation of Nature, issued a 2017 brief on species on the move and climate change, it focused exclusively on the problems newcomers might cause and the need to detect and preemptively repel or eradicate them, using the most conspicuously ravenous of introduced species, such as rats and ash borers, as examples. The USDA’s National Invasive Species Information Center describes novel species as problematic if they compete with already resident species, whether or not that competitive pressure results in displacement of local species.

Whether these and other conservation protocols that treat alien species as guilty before being proven innocent will ensnare climate-driven species on the move remains to be seen. For now, one thing is clear. The categorization of wild species into natives and aliens was established in conservation and entrenched in the U.S. economy during an era in which the most salient introductions of novel species arrived via global trade and travel. In today’s era of species on the move, in which the climate crisis tips thousands into motion, that world no longer exists. The challenge is incorporating this new reality into the way we think about and manage the wild creatures around us.