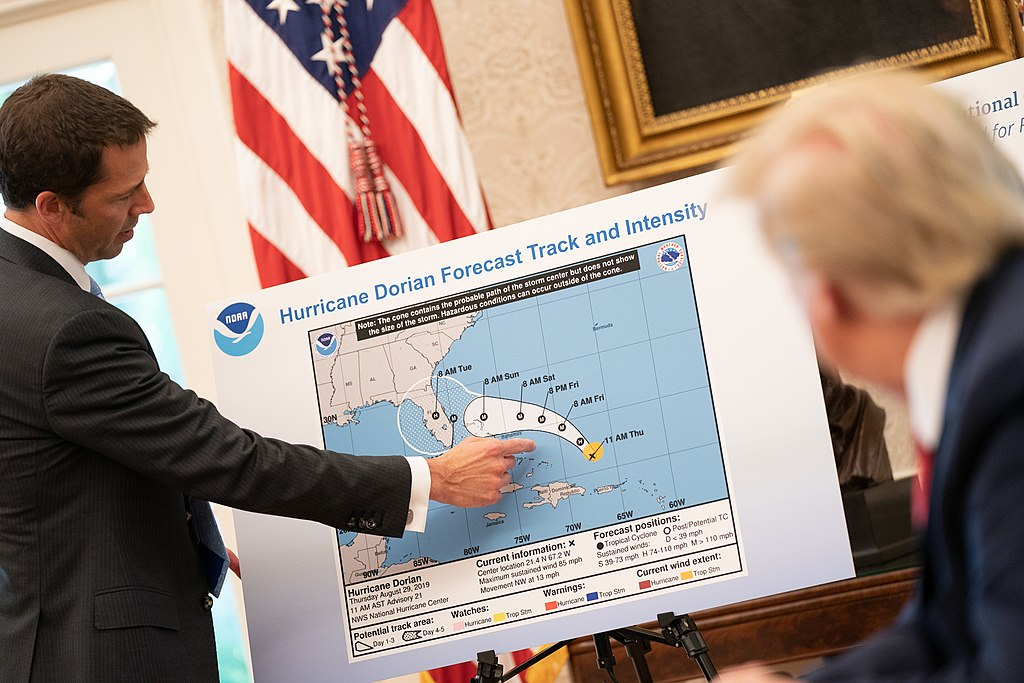 President Donald Trump, joined by Vice President Mike Pence, receives a briefing update on Hurricane Dorian as it approaches the US mainland on Aug. 29, 2019, in the Oval Office of the White House. Author:The White House from Washington, DC[Public domain]
Previous story

Last September, as powerful Hurricane Dorian barreled towards the Bahamas, Donald Trump tweeted that several southern states, including Alabama, would be in its path. This was directly contradicted by the National Weather Service’s latest maps, which showed Alabama outside storm’s cone of uncertainty. Instead of admitting that he made an error, the president doubled down, displaying an altered NWS map depicting a tiny portion of Alabama in a cone that appeared to have been hand drawn with a marker. The incident was dubbed #SharpieGate.

Emails just released to Buzzfeed News and other media outlets show the internal panic over Trump’s false claim at NWS and its parent agency, the National Oceanic and Atmospheric Administration.

“HELP!!” is all NOAA spokesperson Dennis Feltge wrote to his superiors when a reporter asked for clarification about the president’s claim. The emails show NOAA officials confirming that the White House’s map was “doctored” and referred to the Trump administration’s attempt to cover up the president’s mistake as “crazy.”

As worry spread throughout both NWS and NOAA, agency forecasters and scientists feared retaliation if they contradicted the president by providing accurate information about the deadly storm. John Murphy, the chief operating officer at NWS, told another official how to respond to such concerns: “Plan to look them in the eye and tell them they have nothing to fear and we will defend actions.”