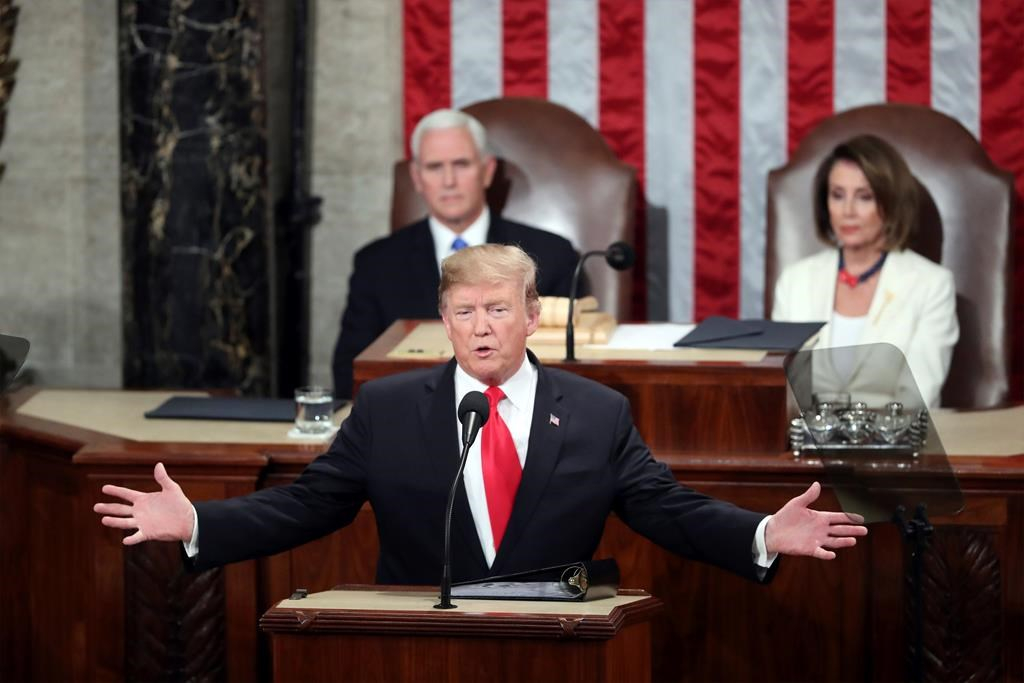 President Donald Trump delivers his State of the Union address to a joint session of Congress on Capitol Hill in Washington, as Vice President Mike Pence and Speaker of the House Nancy Pelosi, D-Calif., watch on Feb. 5, 2019. Photo by The Assocaited Press
Previous story
Next story

President Donald Trump declared his scorched-earth political style an unmitigated success Tuesday in a fiercely partisan, made-for-TV state of the union speech that made it clear he expects to be back in the White House next year on the strength of the U.S. economy and his trade deals with Canada, Mexico and China.

Trump, addressing a joint session of Congress in the very chamber where House Democrats voted to impeach him less than two months ago, became only the second president in American history — Bill Clinton was the first — to deliver a state of the union while standing trial in the Senate.

Unrepentant, he pointedly refused to shake the offered hand of House Speaker Nancy Pelosi on the dais before singing the praises of what he billed as "the great American comeback," pointing to strong job growth, a soaring stock market and low unemployment as evidence of his leadership. And when he was done, Pelosi ripped up the speech in full view of the television cameras.

"America's enemies are on the run, America's fortunes are on the rise, and America's future is blazing bright. The years of economic decay are over," Trump declared, taking full credit for the country's "roaring economy," including what he billed as seven million new jobs and the lowest jobless rate in half a century — a "blue-collar boom" that he's counting on to help his re-election chances in November.

One half of the lawmakers in the chamber rose to applaud his every sentence, many chanting, "Four more years" at the outset. Democrats, on the other hand, sat stone-faced throughout much of it. Several walked out; several others stayed away entirely.

Trump took credit for replacing the "unfair NAFTA trade deal" with USMCA, blaming it for the loss of one in four manufacturing jobs over the course of that agreement's 26-year life, and denouncing his predecessors for ignoring the damage being done.

"Unfair trade is perhaps the single biggest reason that I decided to run for president," he said.

"The USMCA will create nearly 100,000 new high-paying American auto jobs, and massively boost exports for our farmers, ranchers, and factory workers. It will also bring trade with Mexico and Canada to a much higher degree, but also to a much greater level of fairness and reciprocity."

On tariffs, the president's preferred lever for prying favourable conditions out of trading partners and allies, "our strategy has worked," he insisted.

"Days ago, we signed the groundbreaking new agreement with China that will defend our workers, protect our intellectual property, bring billions of dollars into our treasury, and open vast new markets for products made and grown right here in the United States of America."

Perrin Beatty, president of the Canadian Chamber of Commerce, said he had been hoping to hear evidence of stability on the trade file, along with details of the so-called second phase of the China deal. Neither was forthcoming.

Even with USMCA now largely complete, pending ratification in the House of Commons, Canadian industry is smarting from how it was treated during the negotiations, the former Progressive Conservative cabinet minister said in an interview.

Canadians had every reason to expect the talks to reflect the importance of the trading relationship between the two countries in defending North America's shared industrial base from the mounting threat of global rivals.

"Instead, what we saw was an approach ... (that) treated Canada and Mexico as if they were the enemy, rather than partners, and the approach was zero-sum. It wasn't, 'If we get a good deal, everyone can win,' it was, 'One of us can win only if the others lose,'" Beatty said.

"The net impact of all of that is to cause Canadians to be more cautious — to say, for reasons of self-preservation, 'We need to diversify, not have so many eggs in one basket.' And that's a problem the U.S. has with allies and trading partners around the world: that often the people whom they most need have been targeted at one time or another and are feeling a bit gun-shy as a result."

Beatty was in Washington this week for meetings of the so-called B7, the official business advisory group to G7 countries. This year, the focus of the meeting is on fostering international trade and defending multilateral institutions like the World Trade Organization, which have long been in the Trump administration's sights.

The Canadian chamber's priorities at the meetings this year include digital trade and e-commerce, as well as the issue of foreign subsidies for domestic producers and state-owned organizations that distort international trade metrics — long a complaint about China, which promised a year ago to bring its programs into compliance with WTO rules.

"For decades, China has taken advantage of the United States," Trump said.

"We have changed that, but at the same time, we have perhaps the best relationship we have ever had with China, including with President Xi. They respect what we have done because, quite frankly, they could never believe what they were able to get away with year after year, decade after decade, without someone in our country stepping up and saying, 'Enough.'"

Contrary to the expectations of many, Trump appeared to resist the temptation to excoriate Democrats for the day-long delay in the reporting of complete results from Monday's Iowa caucuses, or to publicly complain about impeaching him. He may be waiting for Wednesday, when senators are widely expected to vote to acquit the president.

Regardless who ends up in the White House after November, the uncertainty and upheaval of the last three years might not go away, Beatty warned.

"That's not new. I don't think we can assume that that impulse disappears when there's a change in administration."

This report by The Canadian Press was first published Feb. 4, 2020.