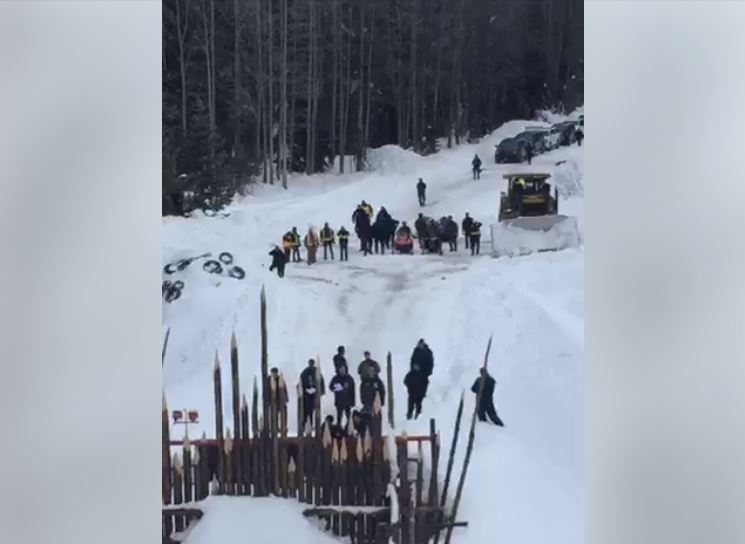 After a seven-hour standoff at a Wet’suwet’en camp in northern British Columbia Friday, RCMP had arrested four opponents of a planned pipeline but failed to advance deeper into the First Nation’s territory.

It was the second day of raids on Wet’suwet’en territory, part of a continuing conflict over the Coastal GasLink pipeline.

As night fell Friday, all was quiet at the site that had been raided, with police retreating and the camp left standing. But further back along the remote forest road that has been the centre of the dispute, more RCMP officers surrounded a camp filled with Wet’suwet’en hereditary chiefs and their supporters, who had temporarily blockaded the Mounties’ exit route with their vehicles.

“A bunch of Wet’suwet’en and supporters parked their vehicles in front of the camp in order to prevent the RCMP from taking away our relatives and our supporters who had been arrested earlier,” said Jennifer Wickham, a member of Gidimt'en Clan, one of five Wet’suwet’en clans, in a live video posted to Facebook.

“They’ve been up there having a ceremony and singing… There are now 30 RCMP officers blocking them in. They’ve set up foot patrol and have them surrounded.”

Members of the Wet’suwet’en Nation and their supporters have built four camps along the Morice West Forest Service Road, about 1,200 kilometres from Vancouver, as they reoccupy their unceded territory and oppose Coastal GasLink. The pipeline is planned to run through Wet’suwet’en land, even though the nation’s hereditary chiefs have not consented.

The camp surrounded by RCMP Friday night is at the 27-kilometre mark along the road. Originally, the RCMP said supporters were welcome to gather there as it was outside the zone affected by a court injunction meant to force the Wet’suwet’en out of the pipeline’s path.

One of those trapped at the 27-kilometre camp is Molly Wickham, Jennifer’s sister and a spokesperson for the Gidimt'en Clan, who is seven months pregnant.

“It worries me that she’s surrounded by RCMP for protecting her territory for her children,” Jennifer said in the video, struggling to hold back tears.

Friday’s arrests bring the total number of people arrested in the raids to 10. Six were arrested Thursday and released without charges, along with two journalists who police temporarily detained.

The RCMP managed to clear the vehicles blocking the road just after 7 p.m. Pacific time.

The raid on the Gidimt’en Checkpoint

The four arrested Friday were apprehended at the Gidimt’en Checkpoint, a camp at the mouth of a bridge along the snowy forest road. In the late morning, RCMP tactical teams had surrounded camp, with helicopters dropping dozens of officers behind it while more arrived at the front by snowmobile.

As officers prepared to raid the Gidimt’en Checkpoint Friday, one read aloud the injunction through a loudspeaker and said the RCMP would arrest anyone who didn't leave the area. Earlier in the day, the checkpoint reported that 55 RCMP vehicles had been spotted coming up the road, including a bulldozer.

"They have us surrounded," said a man speaking in a live video on the Wet'suwet'en Access Point on Gidimt'en Territory Facebook page, the sound of a helicopter in the background.

The community at Gidim’ten, at the 44-kilometre mark of the road, had built two fortified gates ⁠— one metal, one wooden ⁠— and a watch tower. Two of those arrested were at the top of the tower, while the other two secured themselves inside an old school bus at its base.

Police pulled down the metal gate and used a chainsaw to take down the wooden one, the community reported on Twitter.

Though officers tried to get inside a trapping cabin off the road and threatened to arrest the people inside, those officers appeared to have left without forcing their way in Friday night.

In a statement, the RCMP said support beams on the bridge appeared to have been cut.

“The bridge is unsafe for all traffic, including foot traffic. The RCMP will be entering into a criminal investigation into this matter.”

RCMP have declined to provide a map showing what’s inside the exclusion zone ⁠— a term used by police to describe an area where access is restricted. Though the RCMP previously said journalists in the area would be arrested, the force walked that statement back Friday following condemnation from the Canadian Association of Journalists and others.

Journalists were blocked from taking photos and video during some parts of the raids Thursday and Friday.

According to Ricochet, an online media outlet with a reporter on the ground, journalists were told on Thursday they'd be arrested if they recorded tactical officers holding guns or officers smashing a truck window to arrest a Wet'suwet'en community member. On Friday, RCMP allowed a reporter at Gidimt'en to take photographs and video, but only at a distance of 60 feet.

The first round of raids Thursday began hours before dawn, when officers with the court injunction in hand stormed a media camp and supply post at the 39-kilometre mark of the road to clear people out of the pipeline’s path.

Further along the road at the 66-kilometre mark lies the largest and oldest camp: Unist’ot’en, home to a $2-million healing centre. There have been no reports of RCMP reaching that area.

What is Coastal GasLink?

Under Wet’suwet’en law, authority over the nation’s 22,000 square kilometres of unceded territory lies with hereditary chiefs from five clans, who oppose the pipeline.

But TC Energy has touted the approvals it received from elected Wet’suwet’en band councils, which were created under Canada’s colonial Indian Act. The elected councils have jurisdiction over reserve lands but not the area adjacent to the pipeline.

The hereditary chiefs’ land claim is backed by a 1997 Supreme Court of Canada decision, which affirmed the Wet’suwet’en right to their land. But many key aspects of the dispute remain unresolved, as the court also sent the case back for a second trial that hasn’t yet happened.

Last year, RCMP enforcing an earlier court injunction violently arrested 14 people at the Gidimt’en Checkpoint. Documents later revealed by the Guardian showed that officers had been prepared to use lethal force.

The RCMP began steadily increasing police presence on Wet’suwet’en territory on Jan. 13, putting up a blockade at the 27-kilometre mark of the road. In the weeks that followed, officers poured into the surrounding towns as they prepared to enforce the second injunction, conducting daily surveillance-helicopter flights over the Wet’suwet’en camps.

On Wednesday, the RCMP warned they would begin enforcing the injunction imminently.

Solidarity demonstrations played out across the country Thursday and Friday, with Wet’suwet’en supporters blocking highways and rail lines.

The situation has been condemned by the B.C. Human Rights Commission, the B.C. Civil Liberties Association and the United Nations Committee on the Elimination of Racial Discrimination.

and where is Mr T ? Where is

and where is Mr T ? Where is his soothing understanding tones if reconciliation through dialogue? He's in Africa telling them how progressive Canada is while at home for all intents and purposes, our national police are assisting extraction company to invade first nations territory JUST LIKE BOLSANARO is doing in Brazil for his extractive industries. (maybe the same companies????)

Our government doesn't, like Balsonaro, make press announcements including verbiage that the indigenous population is less than human, but that with "evolution" they are improving and some might become fully human, like "us."
How in the name of all that's decent does that evade a public condemnation by our government.
No, our government doesn't say such things out loud: but they behave as though they believe them.